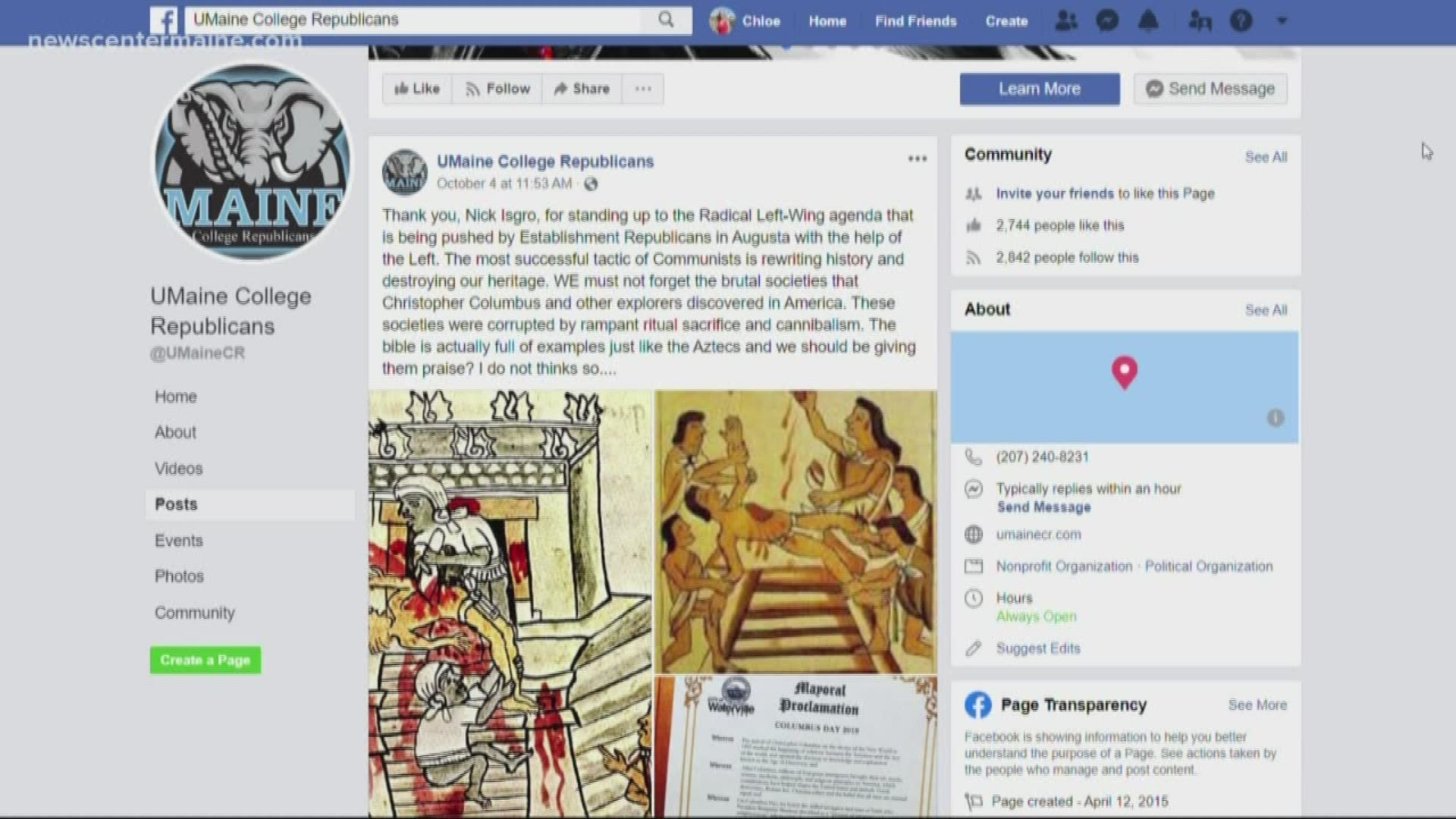 ORONO, Maine — It's a discussion that has revolved around points of contention for years -- what to name that mid-October Monday holiday.

In April 2019, Gov. Janet Mills and local officials reached a milestone in that conversation, signing a bill that officially changed what used to be called 'Columbus Day' to 'Indigenous People's Day', instead.

The bill was set to go into law 90 days after her signature, which means this year, October 14, is the first time in Maine's history that the holiday will officially be referred to under the new name -- but there are a number of Mainers out there who do not approve.

Waterville Mayor Nick Isgro is one of them. On October 1 at a city council meeting, he formally proclaimed he would like the holiday to still be called 'Columbus Day', at one point describing these older titles as 'preventing our holidays from going in the trash'.

Following Isgro's remarks, the University of Maine College Republicans took to their Facebook page on Friday, October 4, posting a series of pictures with a paragraph of text, thanking the mayor for standing up to the "radical left-wing agenda" in Augusta.

"We must not forget the brutal societies that Christopher Columbus and other explorers discovered in America," the group wrote in its post. "These societies were corrupted by rampant ritual sacrifice and cannibalism."

Penobscot Nation Tribal Ambassador Maurian Dana, however, has different thoughts. She helped lead the initiative to change the holiday's name in the Pine Tree State.

"Columbus was a war criminal. He did not discover anything because there were people here," Ambassador Dana told NEWS CENTER Maine on Wednesday. But she adds that situations like these can be difficult for people to accept and adapt.

After reviewing the UMCR's post, UMaine's Vice President of Student Life Robert Dana sent out an email, saying that the language the group used is neither "supported by nor reflective of" the school's "values and principles of inclusivity and equity".

But UMCR took to its Facebook page again, writing that Vice President Dana's email stemmed from "destructive behavior", demanding a "formal apology for this blatant misrepresentation of (its) views".

"The University felt that because our name was implicated in the post, of course we had to express our value structure -- what we believe in, what we're doing here at UMaine," Vice President Dana said, adding, "We support every student's right to free speech and to meandering through the marketplace of ideas."

It was a decision that resonated with members of University of Maine College Democrats.

"There's no reason to (indigenous people) out. No reason to say they are savages," UMCD President Liam Kent adds.

UMCR did not agree to go on camera for an interview Wednesday with NEWS CENTER Maine. The group did decide to provide a statement regarding the recent controversy, reading in part:

"Our position on this topic has not changed. Christopher Columbus was and is an important historical figure worth recognizing. Through our sharing of ancient native artwork and practices, many assumed we were equating past societies with present day indigenous peoples - this is not the case.  Anyone who denies these realities is doing a disservice to the peaceful tribes that existed at the time. We worked to clarify this in a follow up post made the day after on Saturday."

This year, Maine became one of a growing number of states, including Vermont, New Mexico, Alaska, Minnesota, Oregon, Hawaii and South Dakota, to sign into law new language used for the holiday.

On Tuesday, October 8, the Washington, D.C. council voted to temporarily re-designate Columbus Day as Indigenous People's Day -- at least for this year.