Michael Mercer of Windham is a Navy veteran who has also worked as a police officer and chemical agent specialist. 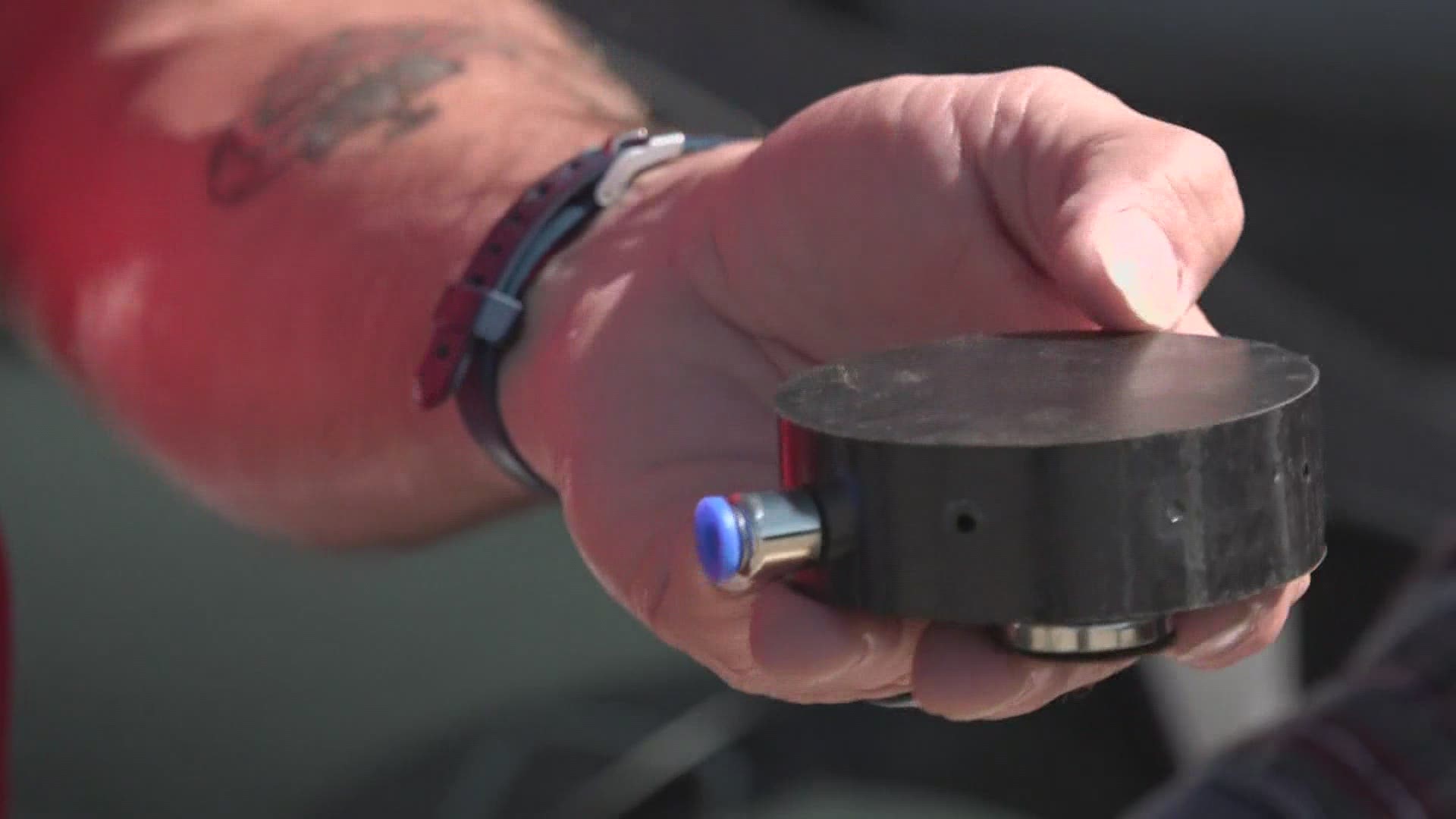 SOUTH PORTLAND, Maine — "Freedom from fear" -- that's the tagline for a new patent-pending, non-lethal self-defense system, created by a man from Windham. As a former law enforcement officer with more than three decades of experience, Michael Mercer wanted to help people -- from civilians to truck drivers to police officers -- from outside threats when they are in their vehicles. That's how F3 Defense came to be.

Mercer has an interesting background. He is a Navy veteran who has also worked as a police offer and chemical agent specialist. Mercer worked with his business partner, who is an engineer, to create F3 Defense, a mobile pepper spray deployment system. A magnet connects a dispenser to the roof of the vehicle, and a hose attaches to an 18.5 oz bottle of pepper spray inside that can be placed next to the driver or passenger. The dispensers come in slightly different shapes, based on their purpose (i.e. a regular car or truck, a tractor-trailer, or a police cruiser), and the parts are made in Maine.

This morning on @newscentermaine, I’m introducing you to Michael Mercer from Windham (in the red shirt). He’s a former law enforcement officer who has created a new, non-lethal self defense device for drivers. The inspiration behind it at 6:30 a.m.! #wakeMEup pic.twitter.com/3GOeb1SR7R

RELATED: 'I'm not going to stop looking' | Father of Kim Moreau still searching for daughter who disappeared 35 years ago

"We put our brains together and came up with a solution really to allow people, motorists to be empowered -- to allow them to know that they're going to be safe, that their families are going to be safe in their car," Mercer, CEO, and founder of F3 Defense told NEWS CENTER Maine.

Mercer says that activating the device when you feel threatened is relatively easy. All people have to do is pull the pin on the pepper spray, press the button, and then the pepper spray will be dispensed all the way around the vehicle. The goal is to allow those at risk to escape a potential threat without permanently hurting anyone. Mercer says he has personally been sprayed with pepper spray 104 times. While he says it's not enjoyable, it isn't lethal force -- and to him, that's the entire point.

"I just think there aren't enough options for less than lethal," Mercer said.

Mercer says he is working with Laredo Motor Carriers Association in Texas to start distributing these devices to truck drivers. Real Women in Trucking is another group that Mercer has been working with, to help female truck drivers who can be particularly at risk. Jess Graham is a member of the board of directors for Real Women in Trucking and says she's looking forward to installing the first device on her truck. Graham began trucking in 2012 as a single mother with her daughter to escape an abusive relationship. She says it's an industry that's not always easy for women -- and can sometimes feel dangerous.

"There tends to be a shortage of adequate truck parking, and so we're left running out of hours on our logs, and we're forced to shut down in abandoned parking lots, or on the shoulder of the highway," Graham explained to NEWS CENTER Maine.

The hope is that F3 Defense will help to ease some of those concerns -- and relieve some pressure when it comes to self-defense.

"I think if I (were) to use a handgun or any other kind of weapon, I would be a little bit more hesitant to use it for fear of that permanence," Graham said.

RELATED: 'We must speak about the disease that's killing us'

Pepper spray is legal in all 50 states, though some do have restrictions. In Maine, pepper spray can be used for self-defense, but you must be over 18 years old to buy, use, or carry it -- and you can't be convicted of any felonies.