The 'Which bin does it go in?' program serves five southern Maine communities and has reduced contamination rates from 80 to 25 percent in some cases. 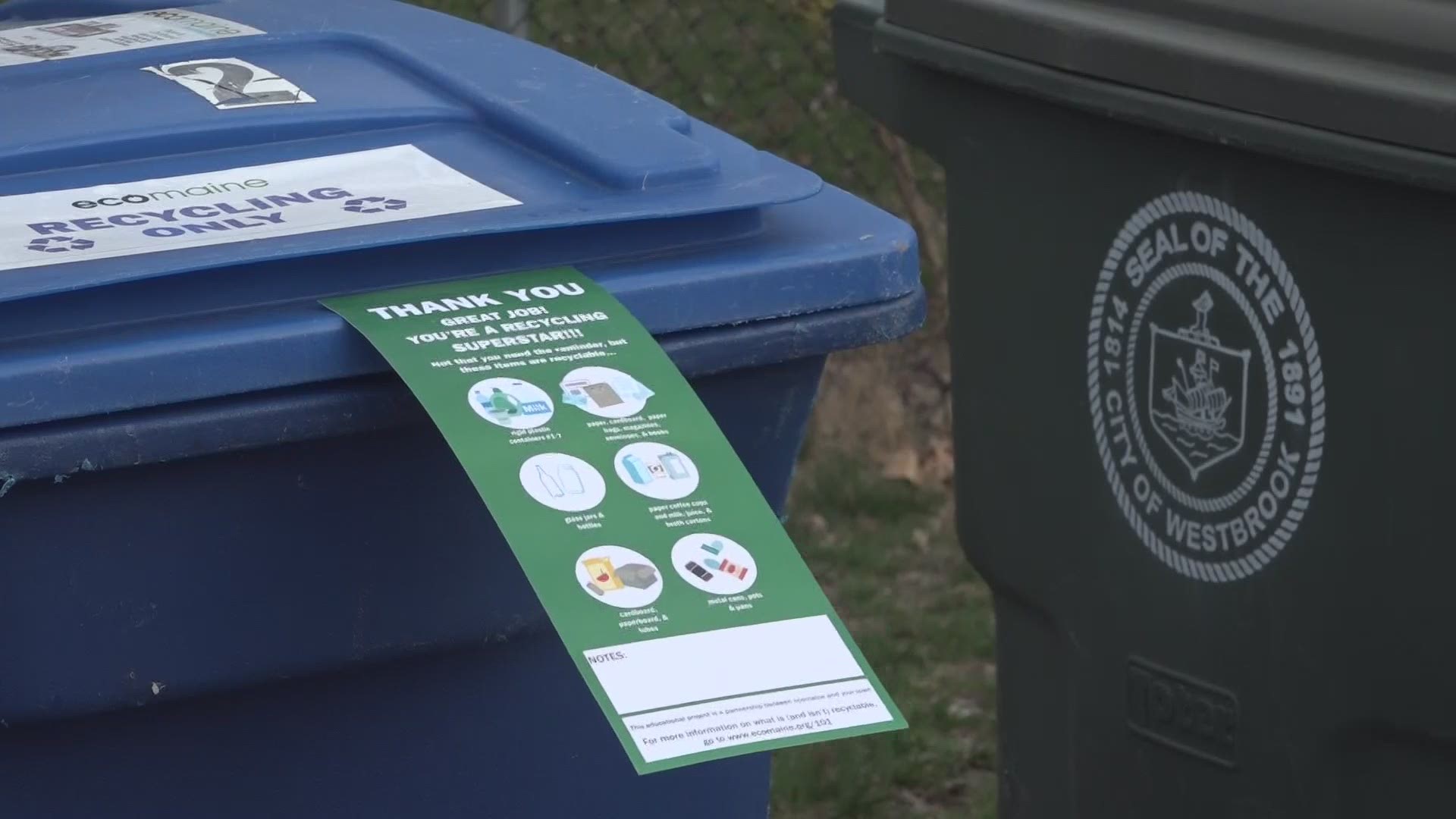 WESTBROOK, Maine — After a winter break, an educational recycling program is starting up again in some southern Maine communities in April -- in time for Earth Day 2021.

ecomaine's "Which bin does it go in?" program, designed to reduce recycling contamination rates, began in Portland, Scarborough, and South Portland in 2019. Westbrook began partnering with ecomaine for this program last August during the pandemic -- and this month, Yarmouth is the newest municipality added to the mix.

Interns with ecomaine help to make this program possible by inspecting some community members' recycling bins and giving them feedback with a tag. Green means the bin has good recyclables; yellows indicates there are some items that are not recyclable; and red tells the resident there is too much contamination or trash in their bin for items to be recycled, which can be costly to the environment and local economy.

Each tag identifies "dos" and "don'ts" of recycling, and the recycling and trash collection routes interns visit are determined by ecomaine data, indicating where there may be higher levels of contamination. With each visit, interns record their findings to keep track of trends.

After a winter off, @ecomaine’s “What bin does it go in?” program is back in some southern Maine communities. I’ll tell you how successful this initiative has been so far — and how interns are helping to make it possible on @newscentermaine at 6 and 6:30 a.m. #wakeMEup pic.twitter.com/MCHeE3xPVO

RELATED: Your vote is needed in student 'upcycling' challenge

"I'm passionate about the planet; passionate about recycling," MacKenzie Mobley is one ecomaine intern taking on this program this spring. She recently graduated from the University of New England and began routes about a month ago, first collecting data and then tagging bins at the beginning of April. She says this initiative represents a positive way to help community members improve their environmental footprints because it doesn't require a big behavioral change -- just education. That's something she's trying to do by being involved.

"I'm not somebody who likes to sit by passively and wait for things to change," Mobley admitted. "I think it really starts with you, and an individual can make a lot of difference."

Amanda Monopoly is another ecomaine intern this year, as a junior biology major at the University of Southern Maine. She says she and Mobley do a lot of walking every day -- but the message and opportunity to educate is worth it.

"We live in the gorgeous state of Maine. I think it's really important to be protecting our planet and making sure it's green and clean," Monopoly said.

Mobley says on their routes, she's already seen an improvement in recycling habits -- and that's just within the past couple of weeks. Matt Grondin, the communications manager for ecomaine, says in some cases, recycling contamination rates have gone down from 80 to 25 percent in communities.

To local municipality leaders like Lynn Leavitt, the sustainability coordinator for Westbrook, this program is beneficial, too. She says the city can't recycle highly contaminated loads -- and fees for contamination rates between six and ten percent start at an extra 15 dollars per ton and only go up from there. She says since the program began in Westbrook last fall, the number of green and yellow tags have inverted in a positive way.

"With all budgets being as tight as they are right now, anything we can cut out of contamination fees is a huge benefit to the city," Leavitt said.

RELATED: S. Portland, Westbrook residents to be graded on recycling

With so many people at home during the pandemic, ecomaine leaders say this program has become more important than ever. It's also a good opportunity to provide education "right at the curb".

"When people are home, they're generating a lot of the waste or recycling that they might've produced at the office -- and so what happens is residential recycling becomes so much more critical than commercial recycling, business recycling," Grondin explained.

"We're able to get to hundreds of houses every day and (are) able to educate not only one person in the household, but hopefully multiple people in the household," Lena Ives, ecomaine's environmental educator, added, noting recycling is hyperlocal -- so it can often be confusing to people.

RELATED: 'Living green in 2018': Being smarter about what and how we recycle

The goal is for ecomaine to bring this program to even more communities this year. To learn more, you can click here. You can also visit ecomaine's Recyclopedia for help taking care of our planet.