Bakers at Dysart's Restaurant and Truck Stop in Hermon and Frank's Bake Shop in Bangor are working around the block to prepare for high Thanksgiving demands. 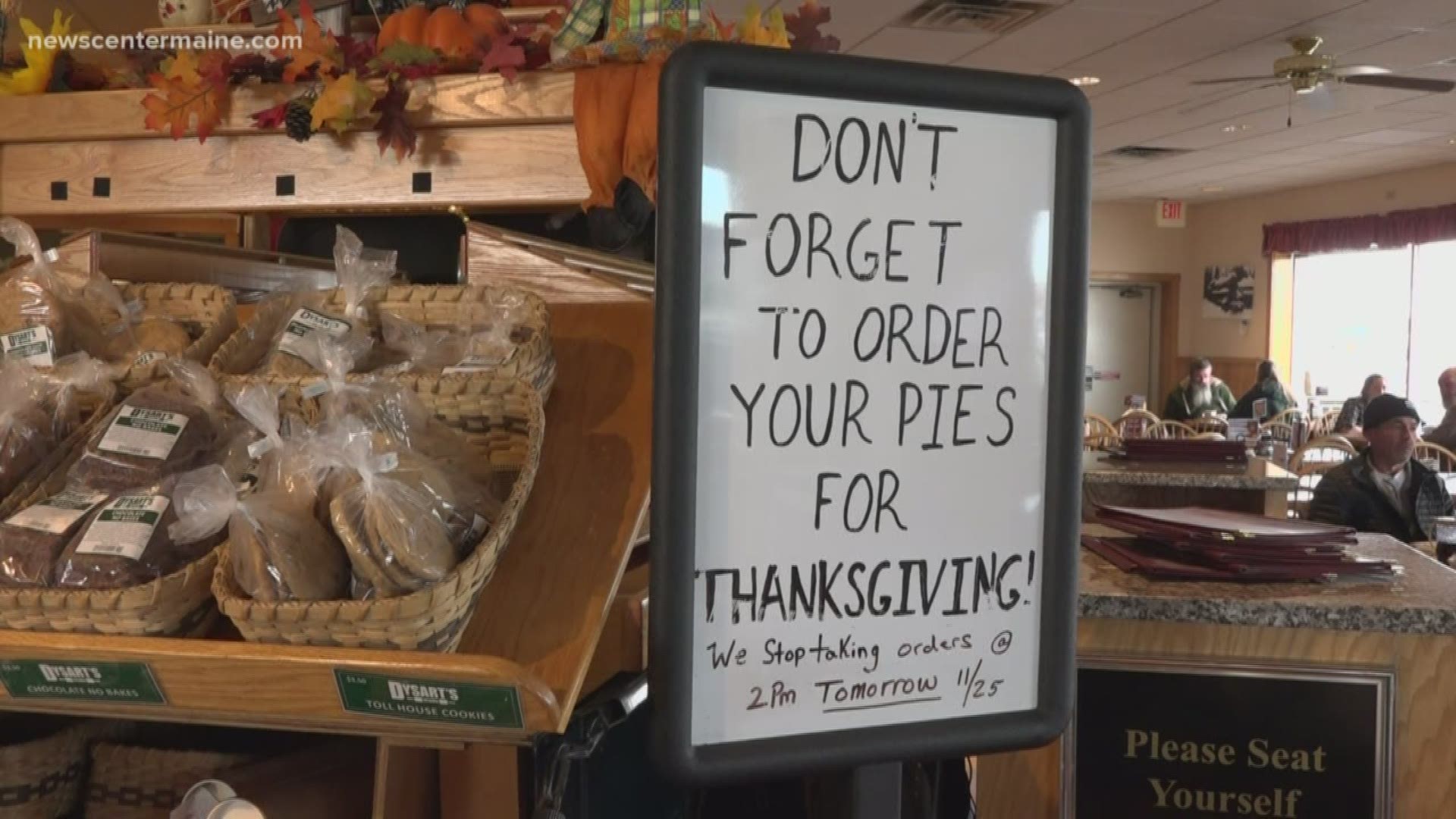 BANGOR, Maine — Dysart's Restaurant and Truck Stop in Hermon is usually bustling with exhausted drivers stopping for a bite to eat, or locals coming in meal after meal until staff know them by name -- but this time of year, the Bangor-area hub is even busier behind the scenes.

Staff have been hard at work these past few days, baking up a storm for Thanksgiving. This year, they are expecting to put out more than 1,200 pies -- and orders closed at 2 p.m. on Monday because of the high demand. While people can no longer request certain flavors, Dysart's bakers will be making extra pies, up for grabs for whoever wants one.

It's a task that's rewarding, seeing how happy a pie can make families -- but this team definitely has a lot of work to do.

"They have been coming in at about 1 in the morning and working through...15, 16 hour days to get everything accomplished," said Carole Brooks, manager at Dysart's.

RELATED: Waterville family gives thanks by giving back with lots of food
RELATED: Orono police, town put on annual Thanksgiving dinner for community

Those long hours have been in place at other popular bakeries in the Bangor area, too -- like Frank's Bake Shop in Bangor.

"It's been a little crazy," said Julie Barlett, a long-time staff member at Frank's. "The holiday's upon us, and we are just baking rolls, baking pies -- anything, really, that the customer wants."

Within reason, of course -- Bartlett says that the earlier the customer gets his or her order in, the better. But the staff understands how busy schedules can sometimes complicate early Thanksgiving planning.

"It’s easier for us if they do give us a call, and then we know the productions that we need to go into," Barlett explained to NEWS CENTER Maine.

The busy week is a stressful one, but Brooks says that after it’s over, all of the time put in to putting pies on the tables of hundreds of Mainers is worth it.

"It’s just memories that it creates of having a homemade, fresh blueberry pie to serve to your family -- and the memories that it’s going to make with the children and the grandchildren," Brooks said with a smile. "And they’ll keep on that tradition going forward."

Frank’s will not be open on Thanksgiving Day, but Dysart’s will be -- and they will be serving a full Thanksgiving dinner.

RELATED: Here are which stores are open, closed on Thanksgiving
RELATED: Wine at Thanksgiving: what to gift, pair, and serve