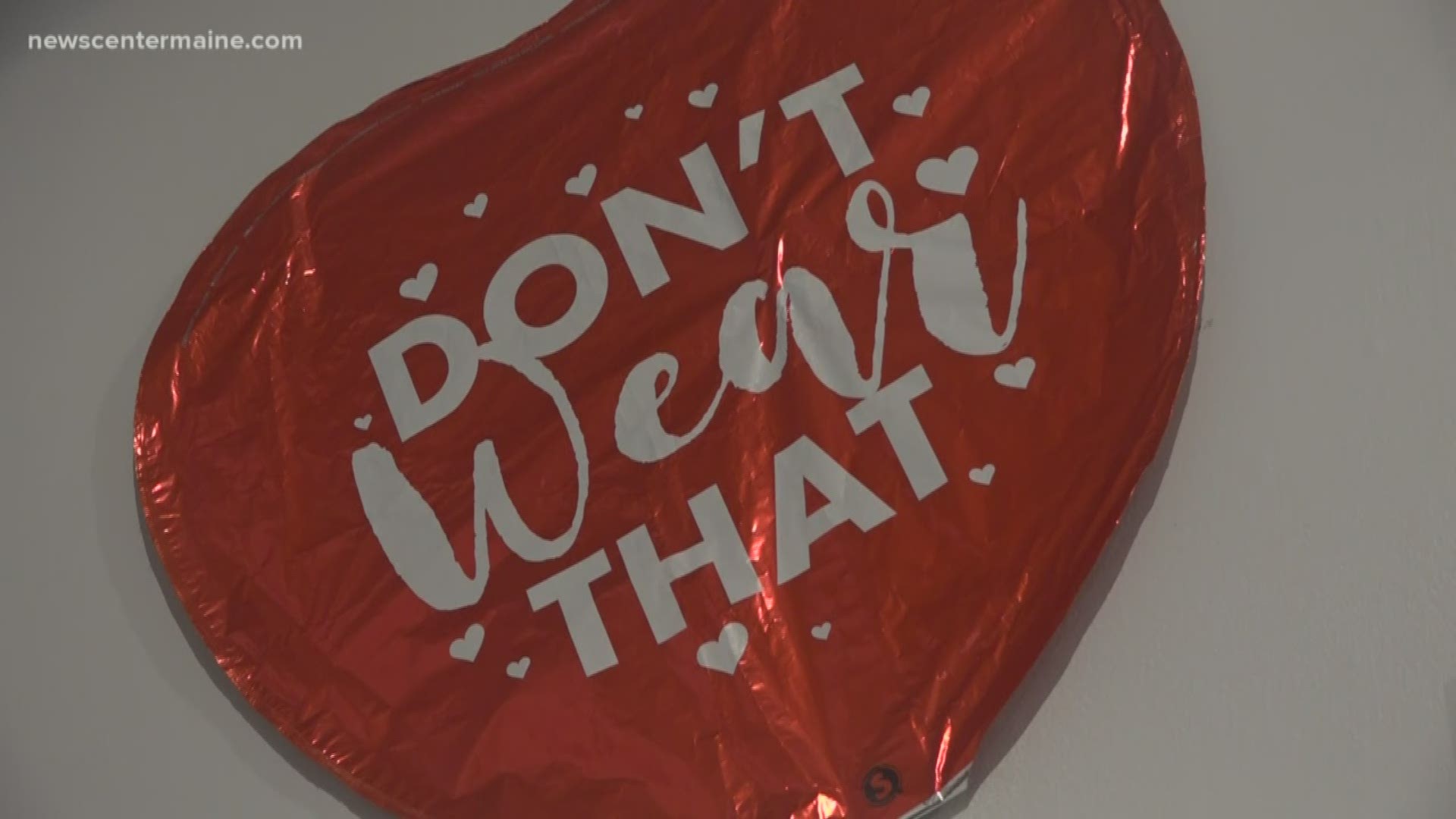 BANGOR, Maine — According to the National Domestic Violence Hotline, more than one in three women and one in four men have experienced rape, physical violence or stalking by an intimate partner.

A new art exhibit at Husson University in Bangor highlights unhealthy behaviors in relationships that can lead to serious problems and even crimes.

The goal of the exhibit is to help people to love better.

"The normalization of toxic behaviors is everywhere, it's not just in romantic relationships but we see it all the time it's just something that after a while we get used to it, we become numb to the situation, and just because that's the case that does not mean that we should let it happen," said Hanna Hembrow, the student organizer of the exhibition and the president of Student Athlete Advisory Committee (SAAC).

A GPS pendant locket that can track where you are, chocolate with a note that says, "I love you but maybe you should watch your weight": all examples of what LOOKS like a nice and special Valentine's Day gift but, are actually reminders to what a partner can install with their power and control in a relationship, more like abusive traits.

A student that visited the exhibit, Delaney Chisholm, realized she was in an unhealthy relationship for more than two years. For her, many of the abusive behaviors became normal.

Chisolm is not alone.

The National Domestic Violence Hotline indicates that nearly 50 percent of women and 40 percent of men experience a form of relationship violence.

As she walks through this exhibit of gifts at Husson University, she better understood that for such a long time she was one of the victims.

"We are just so used to it, that we kind of ignore it and pretend that it's not there," said Chisholm.

"That's exactly why we did something like this so that we can open people's eyes to the fact that there really was a normalization of negative behaviors and that they deserve change," said Hembrow.

Those toxic and unhealthy behaviors can affect anyone regardless of age, race, gender, ability, orientation or religion.

Husson University
Join us tomorrow at the opening reception for the exhibi... tion at the Robert E. White Gallery in the Campus Center. The goal of this exhibition, hosted by Husson University's Student Athlete Advisory Committee (SAAC), is to look at "the difference between healthy and unhealthy relationships and spark change where it may be needed," says 2020 SAAC president Hanna Hembrow.

These harmless-looking tokens are provoking a new way of thinking.

"Come into the gallery so they can exchange ideas, get ideas, and see a different way of communicating," said Kathy Smith, the Robert E. White Gallery Coordinator at Husson University.

According to the National Domestic Violence Hotline, the statistics clearly indicate the problem is widespread.

"I just wished I figured it out sooner, that it just clicked sooner," said Chisholm.

Exactly what the sweet-looking items in this collection are designed to make happen, as we approach the holiday of love and romance.

The exhibit is sponsored by the One Love Foundation. It strives to reduce relationship violence by educating, empowering and activating young people in a movement for social change. It was founded in honor of Yeardley Love, a student at the University of Virginia that was killed by her boyfriend. The foundation says her death was completely preventable if she would have spoken out about the abuse. Now the mission is that it doesn't happen to others.