In June, Jackie Hart applied to become a housekeeper at the Harbor View Motel and Cottages in Southwest Harbor. She is 84-years-old and a born-and-raised Mainer. 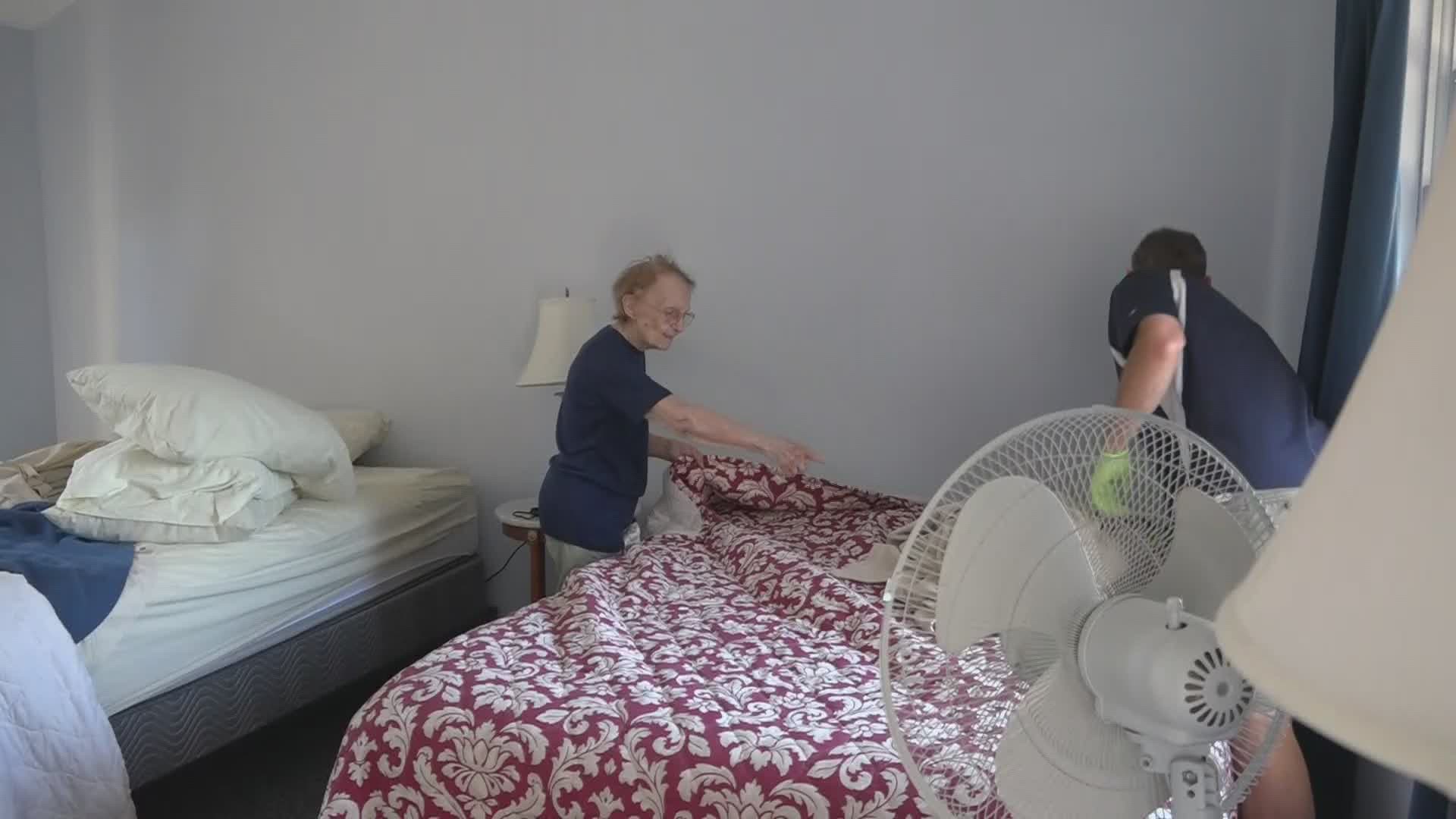 SOUTHWEST HARBOR, Maine — In Southwest Harbor, late Tuesday morning sunlight sparkles on the water, bathing the Harbor View Motel and Cottages in a humid warmth. It's quiet on the campus, a few visitors piling into their cars for the day's excursion, or enjoying a book on their weathered decks. Step into one of the units, though, and it's a different story.

"Now, let me see. Fold it down!" In room number 11, Jackie Hart is making a guest's bed with the help of motel manager, Sedge Saunders. From her self-assured direction and finger pointing, you'd imagine she's been working as a seasoned housekeeper for decades. In reality, this is her first time in the role at 84 years old.

"I'm lucky to have a job," Hart laughed while chatting with NEWS CENTER Maine, lounged in an Adirondack chair on the lawn before her shift began. "Anything else you want to know?"

We all need a pick-me-up story these days, so this morning, I'm introducing you to born-and-raised Mainer Jackie Hart. She's 84 years old and just got hired as a housekeeper at a motel in Southwest Harbor! That story on @newscentermaine at 5:30 and 6:30 a.m. #wakeMEup pic.twitter.com/cye8QZUvMK

Hart eventually spoke a bit about her background, telling NEWS CENTER Maine she was born and raised in Bass Harbor. She moved to Florida with her husband for about 20 years but was thrilled to come back to her home-state in the mid-1990s. Hart says she was working as a Walmart greeter before retirement but then found her social security check just wasn't cutting it. That's when she picked up the phone one day in June.

"I took the phone, and I hear this woman's voice, and she said, 'I hear you're looking for a housekeeper,'" Saunders recalled about their conversation that day. "I said, 'Yes, we are.' She goes, 'Well I'd like to apply, and I'm a good worker.'"

Saunders smiled, adding that Hart also warned him about her age during that phone call, saying she hoped he wouldn't hold that against her. That shouldn't have been a concern, though. Everyone who knows Hart remarks how much energy she has -- but she says the key to her success in her new job is actually pretty simple.

RELATED: Keep ME Open: Portland business offers 'pay what you can' to paddle Casco Bay

"I do what they want done and do it how they want it done and do what I'm told," Hart emphasized matter-of-factly. Even as the newest employee at the motel, she fits right in. Most of the other staff members have been working there for about 20 years. With the stunning views and kind management and regular visitors, it's easy to understand why one might stay -- and that loyalty doesn't go unnoticed.

"I'll talk to them in the off-season, you know, when I'm not here," said James McClain, a man from Massachusetts on his tenth visit there. "(I'll) just send an email or call, say, 'How's it going?'"

Saunders says he doesn't like to take credit for anything -- insisting his staff members are the ones "running the show". When people like Hart need some help though, he is happy to jump on board.

Saunders did add the motel is taking necessary precautions to protect customers and employees (especially those who are older and more at risk) from the coronavirus pandemic -- like using face masks, gloves, and sanitizers; staying six feet apart; and not allowing employees to go into customers' rooms when they are still there.

RELATED: Keep ME Open: The Store Ampersand reinvents itself to keep its lights on