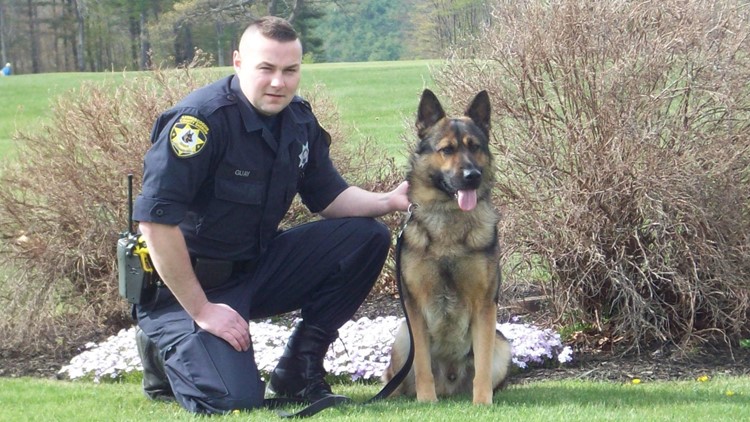 AUBURN, Maine — The Androscoggin County Sheriff's Office said a bittersweet goodbye to one of its beloved K9 members this weekend.

On Saturday, January 25, the sheriff's office wrote in a Facebook post, "It is...with deep sadness that we announce the unexpected passing of K9 Bosco".

According to the post, Bosco was rushed to the emergency veterinarian Saturday morning after experiencing medical issues. He later passed away.

Bosco had been working with his handler, Sergeant Jon Guay, since 2010. The department wrote that he was "a tremendous asset to our agency and the citizens of Androscoggin County".

The comments on the post were flooded with people thanking Bosco for his service and sending Sergeant Guay and his family their condolences.

"I so enjoyed when you would bring him into the station and he would drag me from one side of the room to the other," one Facebook user wrote. "He was a great dog. His service will be greatly missed."

"I've known Bosco for almost ten years and he was the best boy," another Facebook user added. "Truly an officer and a gentleman. The bond between him and his person was something to watch. We will miss you, Bosco."

To end its tribute, the department wished K9 Bosco its best.

"K9 Bosco your shift here is now done," the department wrote on a final note. "You will not be forgotten. May you Rest In Peace."