Anchor in Maine media stepping down after 39 years 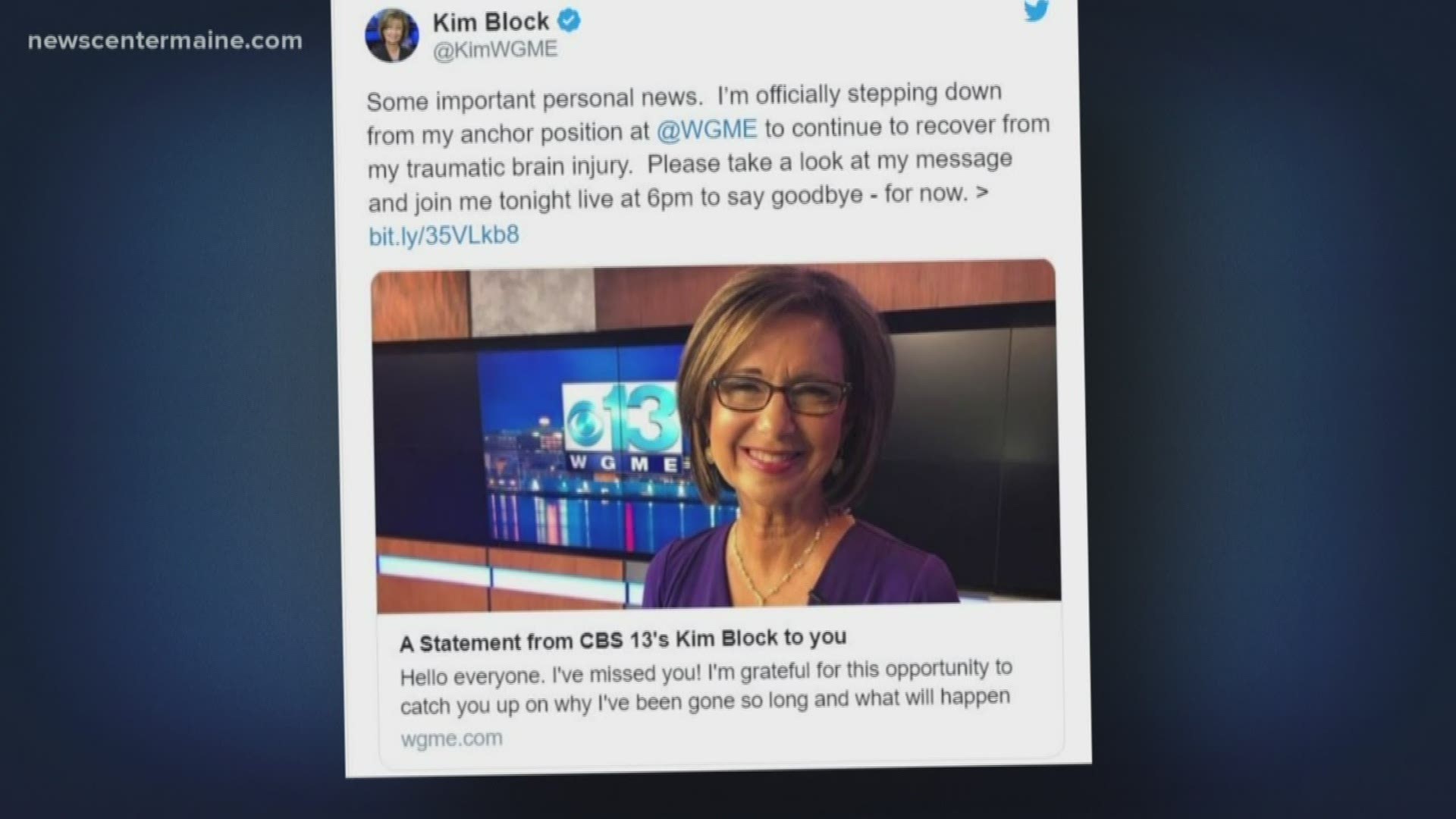 PORTLAND, Maine — You know her face, and her vibrant smile, and her gentle heart. Kim Block has been bringing people in southern Maine the local news with perspective, curiosity and sensitivity for 39 years at WGME TV.

She is universally known as one of the kindest, most sincere souls in the business. I've known Kim since I got my start in this market 30 years ago. She was already a revered fixture on the landscape. I have nothing but immense respect for her. She has never, despite sometimes fierce competition between our two stations, been anything but kind, thoughtful and honest with me about her life and work. It is with that same grace and candor that she posted a farewell (for now) to her viewers today. It brought tears to many eyes, including mine.

All of us in the business have been following Kim's trials and tribulations, as she recovers from a traumatic brain injury. She fell on the ice outside her home more than a year ago, landing on the back of her head, suffering a serious concussion. She hit the ground with such force that her brain reverberated inside her skull, causing her to experience vertigo, nausea, headaches, and severe sensitivity to sound and light. Kim says in her post, "I could not walk a straight line and I needed to hold on to walls to walk around my house. I could not drive, cook, read, watch television, hold lengthy conversations, fold socks or sort the mail. And the never ending pounding in my head was nearly unbearable."

Kim has undergone more than a year of physical therapy, in hopes of regaining balance, focus, and tolerance for her surroundings. She has been unable to be on the anchor desk during that time. As one of her close friends told me, "She's making progress, but it's baby steps." She continues to wear sunglasses and headphones in public which, she worries, make her seem off-putting. That's the furthest thing from reality. Kim says "I have come a long way. I can do some of those things, but many are still difficult."

Which brings us to Kim’s decision to step down as lead anchor at WGME news. She assures her viewers that it was a mutual decision between herself and management, and expresses her gratitude to her station and co-workers for standing by her during such a difficult year. She also thanks her family, friends and medical team for their tremendous support.

As these announcements go, Kim Block's departure equates to an earthquake in our business. This television market loves and respects the people who stay here; who know Maine people and understand them. Viewers appreciate reporters who see stories through to the end and who understand the impact of their work on their community and the individuals they interview. Kim Block was a consummate anchor and reporter. She is known not only for her lovely, reassuring presence behind the desk, but her hard-hitting, revelatory reporting on health and other issues. Kim has continued to be a role model through her struggles, remaining positive as she posted regularly on social media about the strides she was making, no matter how small they might seem to some.

In her farewell post, and in keeping with her desire to inform and inspire, Kim encourages everyone to learn more about concussions and traumatic brain injuries, so that we might all be more accepting of those who struggle to "navigate this active, noisy, bright, challenging world." The fact is, it's not just soldiers and athletes who are risk of this kind of injury. It could happen to any of us. So be careful, and be kind.

Kim is leaving the door open to future on-air work at WGME, as her condition continues to improve. We will all look forward to that day, seeing her smiling face, assuring us that no matter what we are dealing with, everything is going to be ok. In the meantime, if you see Kim out in public with her sunglasses and headphones, say "Hi" so she knows without a doubt how much the people she served for 39 years love her and will miss her in their daily lives.