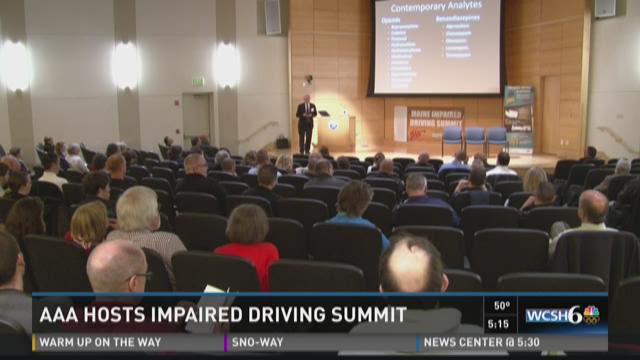 Maine voters will decide this November if marijuana should become legal.

State Police specialist Aaron Turcotte said marijuana now is more potent than it was years ago. Maine legislators have previously tried and failed to set "per se" limits on marijuana use -- limits similar to the .08 BAC limit for alcohol -- but AAA said there is no reliable science to back these limits.

"We're concerned about highway safety first and foremost. We don't think the laws that exist commonly in states right now to address this issue are the right laws, and we also don't think that law enforcement officers have the tools and as agencies don't have enough of the tools they do have to address this issue," said Jake Nelson, the Director of Traffic Safety Policy and Research. "We're not prepared to manage the issue."

An AAA study released on May 9 showed that fatal crashes increased in states that legalized marijuana.

Monday's summit was aimed at preventing that statistic.

"It's the worst part of the job. How would we feel if this were our loved one?" said Detective Andrew Whitehouse, with the Penobscot County Sheriff's Office.

Turcotte said driving while high can be dangerous.

"When you have that delayed perception reaction, it can be devastating on highways," said Turcotte.

Across Maine there are about 100 Drug Recognition Experts who can evaluate drivers who may be under the influence of substances other than alcohol.

"We are constantly looking to increase that complement to keep Maine roads safe," said Turcotte. "We're only catching a snapshot of those motorists that are impaired on the road."

DRE officers have extensive training to identify when someone is high. When they arrest someone, they evaluate them using a 105-point checklist. That checklist and the officer's observations can be crucial in testimony that secures a prosecution.

"There seems to be this perception that it's less lethal, it's less impairing [than] things like alcohol. We're not finding that's true," said Lynch.

Toxicologists and attorney generals described for the audience what evidence can lead to successful O.U.I. convictions, which they believe will prevent people from offending again. They say evidence can replace the "per se" limits, which do not apply to drugs.

"Per se limits for cannabis and driving are bad policy. They're good intended policies, but they're not delivering the intended effects," said Nelson.