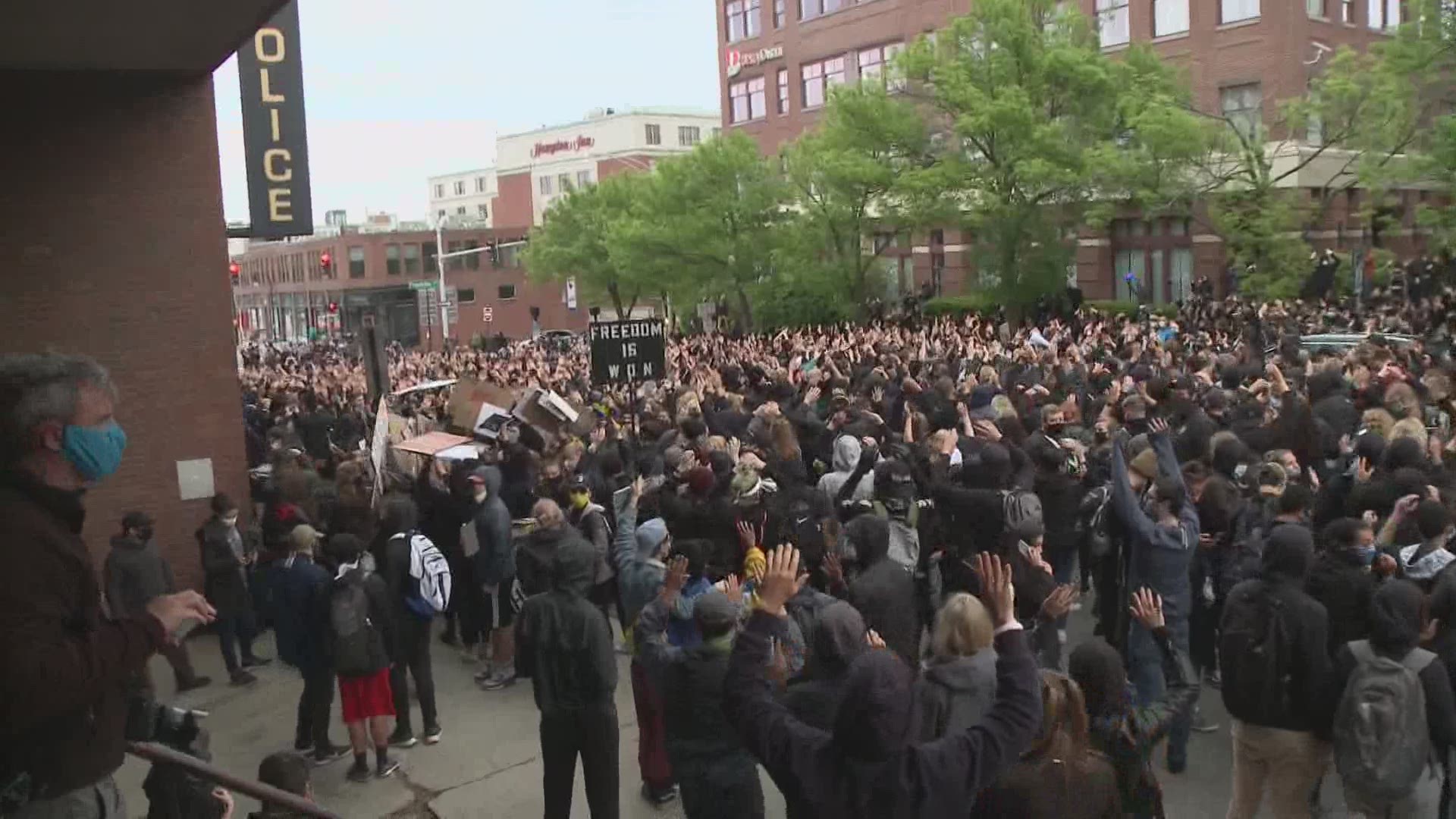 PORTLAND, Maine — It's the third consecutive night of protests in Maine, and NEWS CENTER Maine is continuing its live coverage in Portland.

Things seemed to begin to escalate again Tuesday evening after organizers urged people to peacefully go home after ending the demonstration at 9 p.m. A smaller group didn't, though, and marched back to the Portland Police station. They were met with police again in riot gear.

Around midnight on Tuesday police addressed the crowd of about 100 remaining protestors and said they are attending an 'illegal gathering' and that if they didn't disperse they are subject to arrest. A handful did leave, but most remained.

Police began ordering people to disperse around 10:30 p.m. and said people will be arrested if they don't. Police began using disperse tactics.

About 200 protestors with disjointed missions remain outside of the police department. Some set off firecrackers, and others urged them to remain peaceful.

A crowd of around 200 people has now gathered in front of the Portland Police Department. Some people are setting off fire works. Others are urging people to leave peacefully. @newscentermaine pic.twitter.com/Gr7UgF2xYr

Police began closing in on protestors to close streets. Police fired pepper ballers, which are like paintball guns but shoot out balls of pepper gas.

Protesters are beginning to get on their knees in front of the line of law enforcement on Middle Street @newscentermaine pic.twitter.com/i8vFgkHH44

More than 1,000 protestors marched through the streets, beginning at Congress Square around 6 p.m., and continuing through Portland throughout the evening. They made stops at Monument Square, the Eastern Promenade, and the Portland Police station.

The protestors chanted, marched, and did 'die-ins' demonstrations, where the group lies down on the ground with their hands behind their backs, as Floyd did for more than eight minutes.

The protests come just one week after 46-year-old George Floyd died in Minneapolis as a police officer knelt on his neck, despite his cries that he couldn't breathe. The now-former Minneapolis police officer Derek Chauvin has since been charged with manslaughter and murder. The other three officers involved have yet to be charged.

Protesters around the nation have cried out for justice since Floyd's death. Since then, police departments from Augusta to Portland and from Bangor to Brunswick have expressed "disgust" at the killing and even marched with the protesters.

On Tuesday, officers kneeled with protestors in support on the steps of the Portland Police station.

Protestors are urging for a peaceful protest, which has been the message throughout all protests here in Maine, however, things did escalate Monday night as tensions flared with police in riot gear.

On Monday Police in riot gear responded to a handful of instigators throwing things their way with pepper spray, pepper balls, and other push-back tactics. All told, police made 23 arrests Monday, but all have been released at no bail.

Those were just a few of the eloquent words spoken by an organizer, Devin Moore, at Tuesday's protest in Portland.

Moore and other organizers continue to urge non-violent and peaceful protesting.

"It kills me when the violence drowns out the message of why we’re out here in the first place," Moore said.