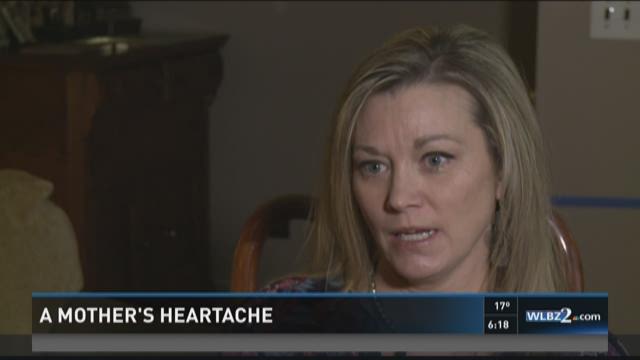 BRUNSWICK (NEWS CENTER Maine) — It's become an epidemic: deaths linked to heroin that's been mixed with fentanyl, an opioid which is used as pain medication and used in anesthesia.

Prince died from it. It killed actor Philip Seymour Hoffman.

"I light this candle in the morning and I say good morning to Alexa," Susan Frost Lamoureux says, the light flickers next to a small photograph of her oldest child.

The light honors Alexa — Lexi to her family and friends. Her bright eyes light up every wall in the home, chronicling her growth from infant to horse-loving teenager to the weeks leading up to her death.

Her small dogs, Hudson and Sabine, are energetic reminders of what Lexi left behind. They now live with Lexi's parents, in the home where she took her last breath.

"I saw my husband's hand go out onto her chest and he just started, on the phone with 911 counting with them and I kept feeling for a pulse praying, I was screaming 'don't take her, don't take her.'" Susan Lamoureux's calm retelling of the night when her life was turned upside masks the heartbreak for her and her family. Simply put, they didn't see it coming.

Susan explains that Lexi, who'd been clean for months, took money out of the ATM at the local CVS, telling her mother she just wanted some pocket money. When they returned, she asked to borrow her mother's bike to "meet up with her friend for a bike ride." Susan says she was "excited Lexi was heading off to meet up with her friend, a really great guy who doesn't do drugs." Instead, Lexi took the bike to buy heroin 5 minutes from home. According to the coroner, it had been laced with fentanyl. Lexi died of a massive stroke.

"It's not, you know, people living on the street. Or whatever people think about heroin users. It wasn't like that," Susan said emphatically. "You never ever would think that she was ever using drugs, but especially heroin, you would never guess."

"She read books on how she could overcome her addiction, on the importance of organics, of alternative therapies, of trying to figure out how to find God. Just trying so hard to figure herself out. Trying so hard to heal herself."

But none of it, including repeated rehab treatments, worked. From that day in college at the University of Massachusetts in Lowell when, while drinking, she tried heroin, her body and her brain were hooked.

"And it addicts from the first time."

Susan Lamoureux is determined to keep Lexi's spirit alive. She launched the Learn from Lexi Foundation and website Jan. 1 of this year.

It is aimed at prevention: The only way, she says, to beat heroin. "Every young person at some point very soon is going to be approached or they're going to know of somebody that's doing it or where they can get it or somebody's going to come and tell them 'just try it, it's really good, just a little bit."

Drug overdoses are the leading cause of death for Americans under 50.

And you might think when stars like Prince die from an overdose, it's a wake-up call and the numbers will improve.

But they are not.

And families like the Lamoureux's of Brunswick are left to pick up the pieces of the heartache overdose inflicts.

"These are people who have passed because of overdoses. And every day in our support group, this one online support group, two to three new mothers join every single day because they have just lost their child."

If you or someone you know needs help, contact the heroin hotline at (877) 902-4756. They can provide information on Maine treatment clinics, helping you take the first step toward beating addiction to heroin and opioid drugs.

If you are in an emergency, call 911 immediately.