Over twenty-four hours after runners crossed the finish line of the Beach to Beacon road race, the event is still making headlines. Robert Gomez made a heroic act of kindness when he chose to assist fellow Mainer Jesse Orach across the finish line, giving the struggling runner the first Maine man title. 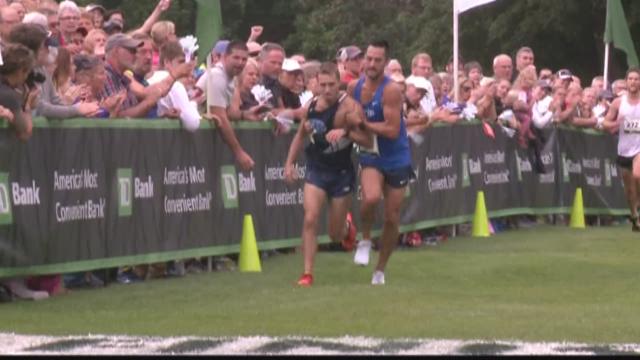 While the attention tends to be given to the race's male and female winners, this year two young men from Maine are in the spotlight.

Nearing the finish line, Jesse Orach from Gorham felt his legs give out.

"The reality that I had come all this way and I might not finish was starting to hit me".

The 23-year-old, who was in position to be the first Maine man to cross the finish line, had collapsed from heat exhaustion. Little did he know his closest competitor would lend a helping hand.

"All of a sudden, I felt someone grab me by the back of my shirt and pick me up."

The helpful set of hands was Robert Gomez of Windham. Gomez assisted Orach through the final steps of the race, giving him a final nudge over the finish line. Both men finished the race at thirty-one minutes and thirty-one seconds.

"He ran a better race than I did," Gomez stated. "He obviously gave more effort than me because he literally passed out from exhaustion. So I really thought that it was the right thing to do to pick him up and carry him."

Gomez doesn't feel like the praise and attention he's receiving is justified, but that he only did what any person in the running community would have done in that situation.

"I really don't feel like the attention is deserved. I'm just a normal representative of what the Maine running community is all about. I just happen to be in the right place at the right time."

"He was right near the finish and I felt like it was right there and he needed to get there."

Orach, who is a competitive runner at UMaine, says he looks up to Gomez, and used to see him win races around the state.

When Orach was helped by medical staff after finishing the race, his internal body temperature was at an upwards of 107 degrees.