Police say speed appears to be a contributing factor in the crash. The investigation is ongoing. 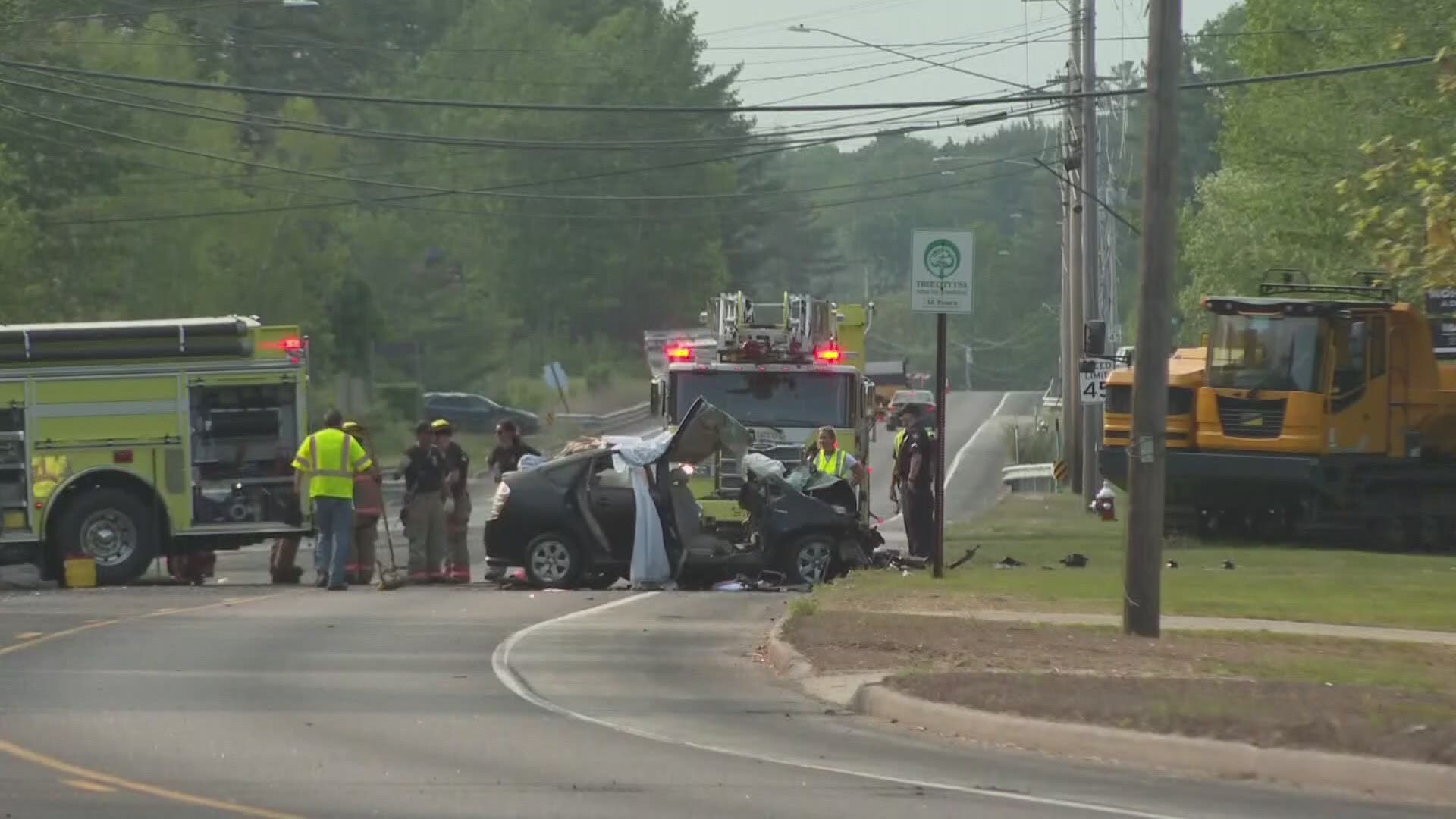 LEWISTON, Maine — Three people and one dog were killed in a two-car crash Wednesday afternoon in Lewiston.

The crash happened in the area of 2075 Lisbon Street in Lewiston around 2:30 p.m., the Lewiston Police Department said in a release.

One vehicle, a 2021 Kia Sportage driven by 34-year-old John McBean Jr. of Connecticut and New Hampshire, was traveling outbound on Route 196 (Lisbon Street) when the head-on crash occurred, police said Thursday. The other vehicle, a 2007 Toyota Prius, was traveling inbound. Paul Dalessandro, 68, of Brunswick was driving the Toyota, and his wife, Judith Montgomery, 68, and their dog were also in the car.

Witnesses at the crash scene support that the Kia was passing the center lane at a high speed and hit the Toyota in the inbound lane, Lt. Dave St. Pierre told NEWS CENTER Maine on Thursday.

Dalessandro, Montgomery, and their dog died at the scene, police said.

McBean Jr. was taken to Central Maine Medical Center, where he died a short time after the crash, according to police.

Lewiston police, including an accident reconstruction expert and a forensic mapper, as well as the Lewiston Fire Department responded to the scene. Police said all of the victims had to be extricated from their vehicles.

Scott Belongie said he was driving along Lisbon St when the crash happened right in front of him.

"I just see the two cars explode. I never saw the other car coming. Both cars were wrecked. There was debris flying everywhere. The SUV went up on it's side," said Belongie.

He said he quickly pulled over and called 911.

"I feel bad for those people. I really do. It just broke my heart, standing there," said Belongie.

NEWS CENTER Maine has learned more about the couple. They spent many hours volunteering at various organizations in Maine.

Merrymeeting Gleaners said: "They were an inspirational couple that seemed to have a joint mission in this life to serve those in need."

Words cannot express our sadness today as we mourn the loss of two of our own. Judy Montgomery and Paul D'Alessandro,...

Posted by Merrymeeting Gleaners on Thursday, May 27, 2021

Mid Coast Hunger Prevention Program said on Facebook, "Their joy for life and service was always obvious and their smiles contagious."

The investigation into the crash is ongoing. Police said Thursday detectives and officers are speaking to witnesses, reviewing scene measurements, consulting with the medical examiner's office, and completing reports to determine what caused the accident.

Toxicology was also ordered on the drivers to determine whether drugs or alcohol may have contributed to the crash and vehicle autopsies will be conducted on both vehicles involved, police said in a release.

Lisbon Street at Gayton Road and at Dyer Road was closed to traffic so emergency responders and police could tend to victims and investigate the accident.

Just arrived here at Lisbon Rd in Lewiston where police are investigating a crash that killed three. Police are blocking traffic on Lisbon Rd at the intersection with Gayton Rd @newscentermaine pic.twitter.com/OeuTrAq2Ys

There are still officers blocking traffic on Lisbon Rd in Lewiston, however the road is expected to reopen soon. Vehicles involved in the crash have been removed from the scene. Working to gather additional details @newscentermaine pic.twitter.com/XGJnx44xoJ