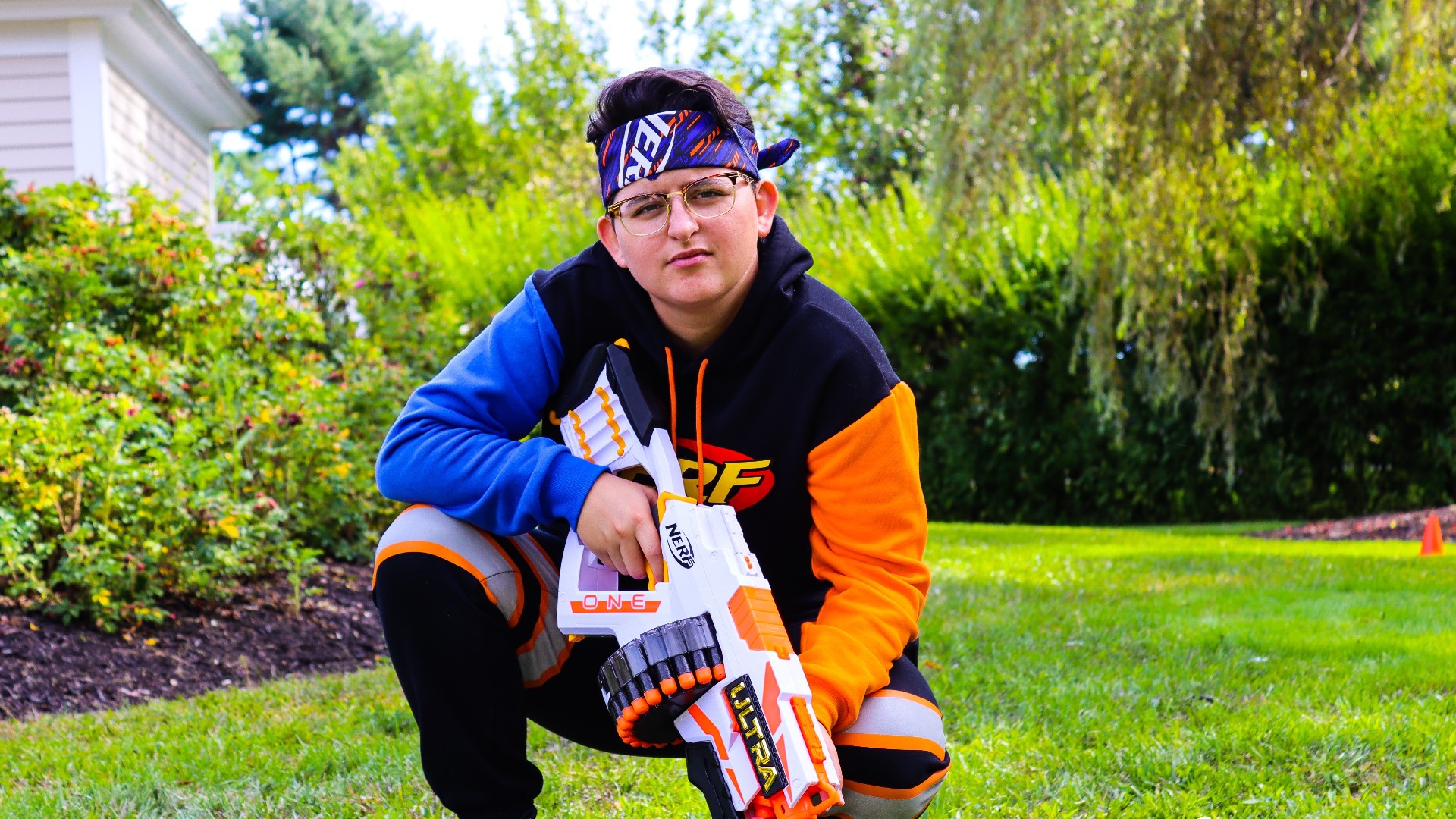 How she does it? With creative 60 second videos about her passion Nerf.

Nerf blasters may be marketed to preteen boys but they became a passion for Sophie after she was diagnosed with a blood disorder right as she was entering High School. She was slated to be the varsity soccer's starting goalie her freshman year when she was diagnosed with Von Willebrand disease -  a blood disorder in which the blood does not clot properly. Under doctors' orders, she had to give up all contact sports.

"I was devastated. Soccer was my whole life and all my friends were on the team so suddenly I was kind of isolated, couldn't do the one thing that I really love to do and entered High School which is already a big change and already scary and stressful. I found myself just really kind of lonely and sad," recalls Sophie.

Not one to stay idle for long she started playing more with the Nerf blasters around her house. Her freshman year also happened to be the year her parents gave her a smartphone and allowed her to use social media. The young teenager jumped on Instagram but didn't like the idea of posting a selfie, she opted to post pictures of Nerf blasters instead under the handle Nerfers101. What started more as a joke started to blossom into blaster reviews and serious knowledge of all things Nerf. Soon her followers were growing including people she did not know and when she reached 10,000 followers her page caught the eye of the toy company she'd been devoting all her posts to. Nerf sent Sophie a package with a new blaster and members of the Nerf team signed the box. It meant the world to the young High Schooler.

As Sophie fell farther down the Nerf rabbit hole she discovered the world of competitive nerf battles and started attending them. (She is very good.) She got invited to toy conventions and toy fairs. She met celebrities and famous YouTubers, some who recognized her. Sophie was flown to L.A. to be in a Nerf commercial and Nerf became her first official sponsor, meaning they would start paying her. She was a special guest at the world's biggest nerf war played at the Dallas Cowboys Stadium and fans started to recognize her while she worked at her job at the Maine Mall.

When Covid-19 hit, all of the events she was expected to attend canceled. Bored she turned to TikTok in January of 2020 and within a month started to have viral success. In 10 short months her followers grew, and along with it did her sponsorships. Sophie now has 10 brand sponsorships but she says she has to be careful not to accept anything that takes away from her page. At the end of the day, she is all about Nerf.

But TikTok fame hasn't come without a price.

"It's one thing for someone to be like your hair looks stupid. And then it's another thing to be like here is something you're actually self-conscious about let me push that button 10 million times," explains Sophie.

The hateful comments and trolls on TikTok got so intense, Sophie contemplated throwing in the towel. She deleted the app from her phone and then she checked her private messages. There she found messages of hope from young fans. A boy told her he published a song on Spotify because of Sophie. Another fan said they wrote a book because of her. It was the light she needed.

"I am just trying to get that message across to people that being yourself is what matters most."

Sophie doesn't read comments anymore but is always very aware of the influence she has and so she stays positive and kind along with fun. Lined on one wall of her Nerf studio - which is a shed on her parents' back lawn - are notes from fans and supporters, people she has never met but that love what she is doing and that she is true to herself. Sophie says the biggest supporters have been her parents who have always encouraged her to be herself.

"It's definitely not considered quote on quote cool to be playing with nerf, blasters especially at my age," Sophie says with a smile. But that's the thing about Sophie, at 20 years old she is still loving being a "professional Nerfer" and she is not going to change for anyone.

"I feel most confident when I am being myself."

What may look like child's play is something few other college students are able to do, turn their passion into a job they love.

"It's definitely a real job by any means. I have to pay taxes I hate that."

She's making enough to pay for college an apartment and "everything that that requires" but she assures me she isn't like one of those "YouTubers ready to buy a mansion."

As for the future for Sophie Lightning, she is finishing up her business degree at USM, working on her podcast, 'Shooting the Foam' and has an internship lined up at Hasbro, Nerf's parent company. She is also planning a charity Nerf war in California as soon as covid restrictions lift. And she's still enjoying making TikTok videos everyday and connected with fans online.