Injured in the line of duty? First responders train to treat police K-9s

Treatment can increase the chances of survival for these highly-trained dogs. 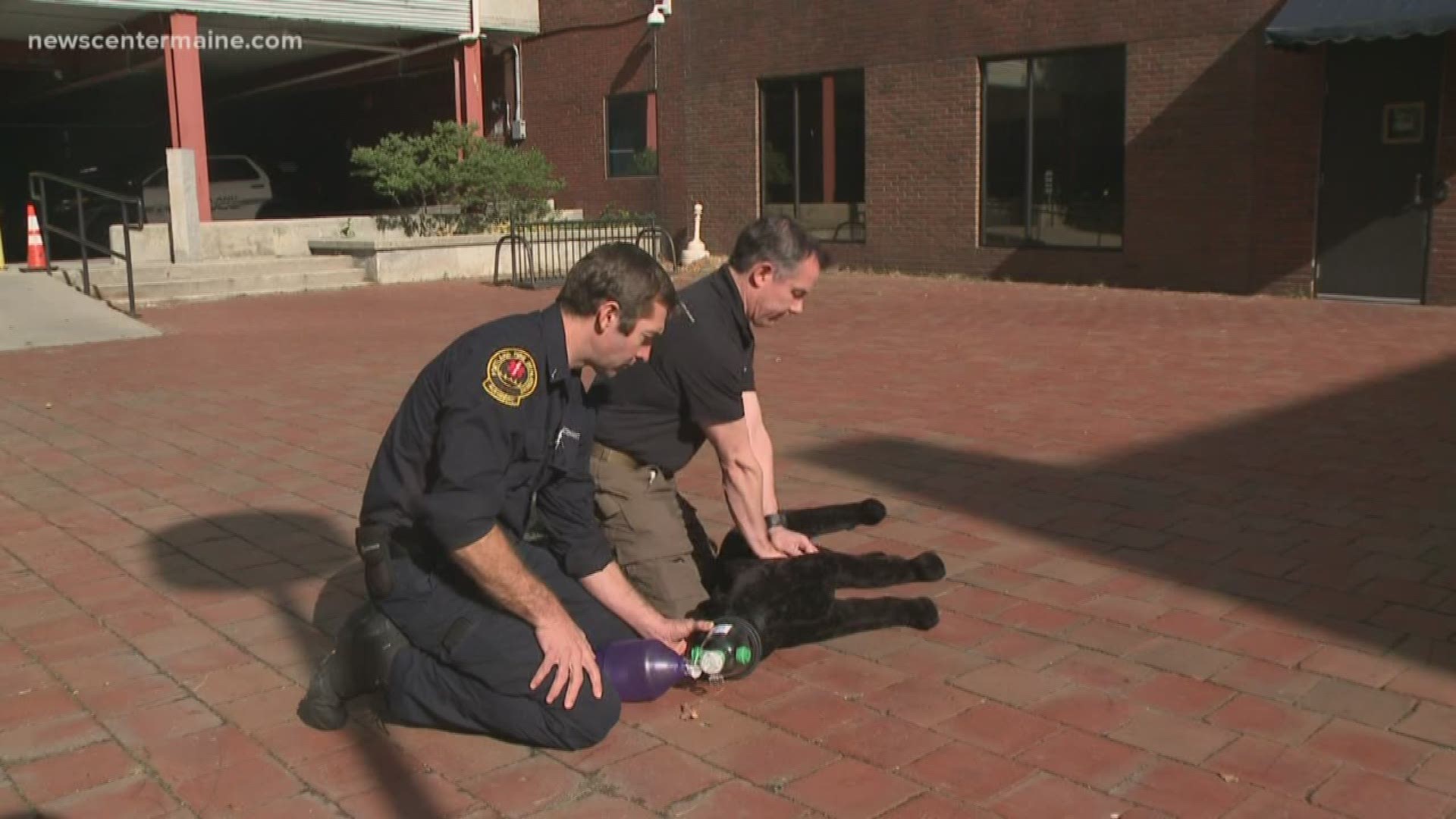 PORTLAND, Maine — Recent legislation has changed the way first responders are able to minister to an injured police  K-9. And for those K-9 handlers, it makes all the difference in the world.

Barni is part of the Portland Police Department’s K-9 Unit, paired with Officer Michelle Cole, a 21-year veteran of the force. She’s had a canine partner for 18 of those years; Barni is almost four years old, and her fourth dog. They’ve been a team for about a year and a half.

He is trained to sniff for explosives so they search public places, or get called in if there is a bomb threat. Today, he’s inspecting the cargo at the Casco Bay Ferry Terminal. As part of his training, Officer Cole’s hidden a training aid for him to find. And when he finds it, he alerts her, and is rewarded.

It is teamwork that requires intensive training – searching for drugs, tracking suspects or missing persons. Their training – together -  is a huge investment of money and time. "Several hundreds of hours if not thousands of hours that go in to training initially before certification," says Officer Cole.

1 / 10
NCM
First responders, medics, and K9 handlers receive life-saving training to treat police K9s who might be injured in the line of duty.

These animals are valuable assets to any police department they serve, often leading the charge at any crime scene. Their work leaves them vulnerable to serious injury while on the job. Up until recently, if a police K-9 was injured in the field, all an officer could do was put the dog in the car, and drive it to the nearest vet. In remote settings, that might have meant hours in transit. Officer Cole was part of a team that worked to pass legislation allowing first responders to be trained to triage and treat police K-9s in the field.

And at the Portland Police Department – handlers, medics, and first responders from all over New England have gathered for one simple goal -- to provide valuable skills and training so that medics can save the dogs life in the event that it has a life threatening injury.

"These dogs have a tremendous amount invested in them. Not only monetarily, training, and they’re also – they’re a member of someone’s family too – even though their working dogs. So – I think it’s pretty powerful...," says Bobby Silcott. Silcott’s an Animal Control Officer, and the founder of the Pet Oxygen Mask project. As a former firefighter, he’s seen too many police K-9s injured in the line of work. He’s donated the oxygen masks for the workshop – part of the tools these first responders are training with to transfer the skills they know for humans – on to dogs. "If they can start administering that help immediately, it’s gonna increase the chances that that dog  is gonna survive."

Dr. Kate Domenica, Emergency Veterinarian, Maine Veterinary Medical Center, is one of the teachers of today's workshop. "A lot of the same drugs that we use on dogs, the same methodologies... are very much the same in human medicine so we’re just taking that knowledge and applying it to the dog. We can’t always be 24-7 available to these dogs – just based on their proximity to an animal hospital. So it’s very important that they learn these first aid measures in order to stabilize the dog and get them to a clinic as soon as possible.'

Windham Police Department Officer Steven Stubbs and his K9 Kora are part of today’s workshop. She is a tracking dog, often the first one to encounter the perpetrator. They have worked together for two years. "We spend more time with them then we do with our own families. This is probably the most important, or one of the most important trainings we do – because her safety -and I’ll tell you this goes for any dog handler – their safety’s number one to us. Because they’re protecting us every day. We don’t’ even know how often they’re protecting us because usually just by showing up and having the dog bark in the cruiser? It’s gonna de-escalate the situation which keeps us safer."

For Officer Cole, seeing these skills being taught to other first responders – means dogs like Barni might get life-saving care in the field. "Barni’s by far the best dog I’ve ever had, I’ve had four. For me it would mean the world. I have a better connection with him. It’s just intense. Professionally, it would give him a fighting chance at returning to duty. So instead of,  again, being out of service, being done, being deceased, we’d have that opportunity to try. We’re together 24/7.  I would be crushed if something happened to him."

The goal of these workshops is simply to get the information and training out to as many first responders as possible. If you would like to learn more about these training sessions, you can email OPK9ME@portlandmaine.gov.

The Maine POM Project, along with the Portland Police Department, will be hosting a Pet First Aid and CPR class on April 26, 2020 at the Cummings Center at 134 Congress Street in Portland. The class will cover general first aid, CPR, choking, bleeding, fractures and more. Proceeds will benefit the Maine POM Project.  For more information, or to register, email OPK9ME@portlandmaine.gov.