"This is baseball" - the joy of Biddeford Little League's Challenger Division

Coach Diane Frechette says of her players, "They all rock it." 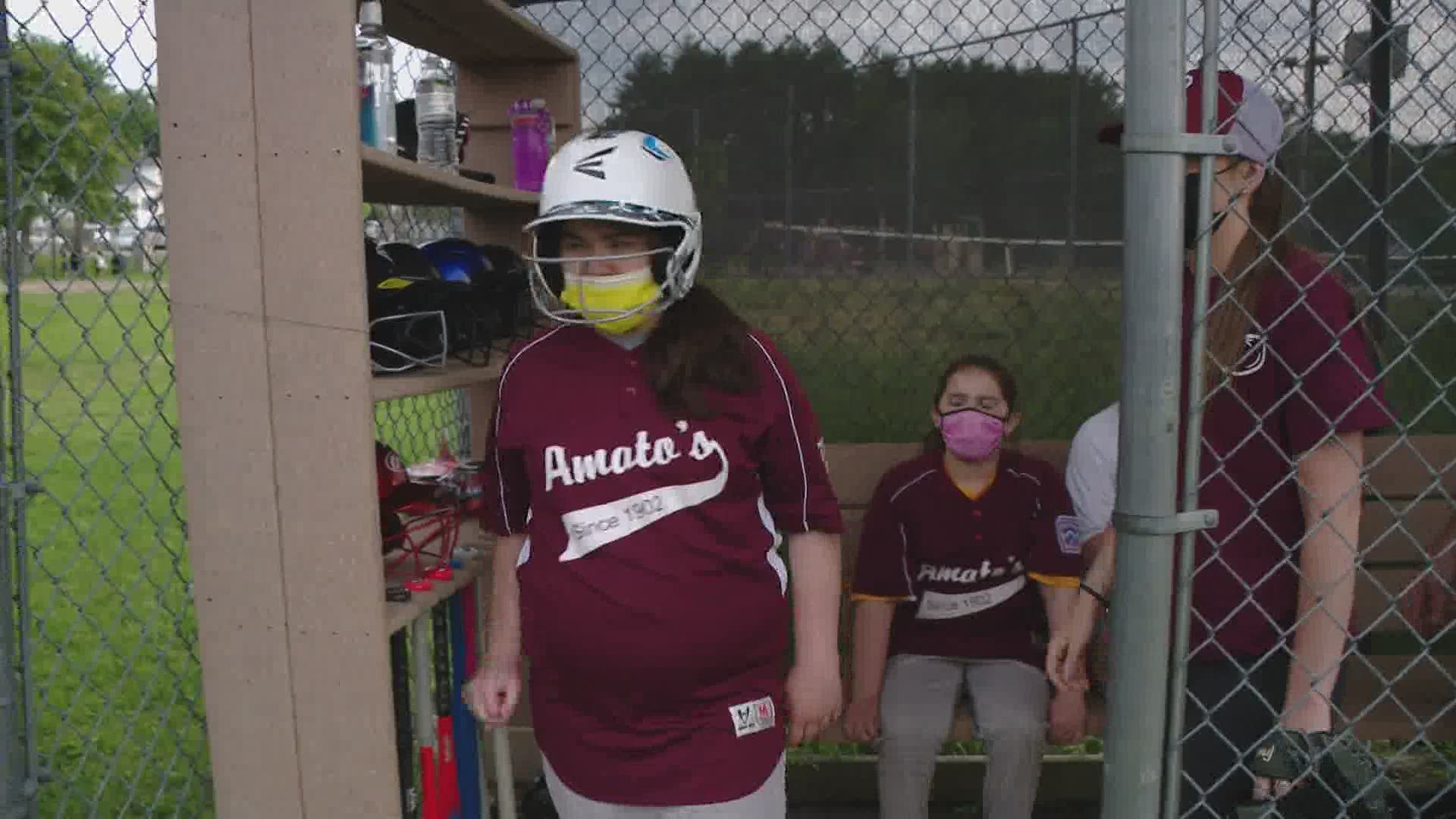 BIDDEFORD, Maine — The little league season might be winding down, but the enthusiasm of the Biddeford Little League Challenger Division, and its director, Coach Diane Frechette, is at an all-time high. They called off their season last year because of the pandemic. So this year? They were more than ready to step up to the plate and play ball.

For ten seasons, The Little League Challenger Division has welcomed athletes ages 4 to 18 who have any type of disability. "It’s great just to spend time outside, everybody’s having fun. It’s a way for people like me to be able to enjoy sports without all of the unnecessary pressure," says player Hunter VanBrocklin.

Here’s how the game is played: Batters get pitches until they hit the ball, then they run to first base.

Coach Diane Frechette guides the team through their warmup. "They work hard. They work hard and hitting the bat to the ball is a very difficult task and when you have all of these other things going on – it’s even harder. They all rock it. They connect, and they run, whether it's in the wheelchair and we’re running with them."

The ball gets thrown to each fielder and ends up back at first base. With each new batter, the players each advance a base.

"Their favorite is whoever the last batter is, it’s a RUN … it’s a ‘homerun’ and they hit it and everybody runs home. And there’s a celebration for every run because they get a score and that is just so powerful to them. This is baseball. And we play … baseball. They have their uniforms, they are players, I treat them like players," she says with pride.

Coach Diane first came to the league as a parent – with her son Hunter, who’s been playing on this team for ten years. Hunter has had his biggest supporter -- his mom -- right by his side as coach.

Diane didn’t stay in the bleachers long – quickly moving to coach, and then director of the league. "Parents with children of special needs…aren’t often able to step back and watch their child. We’re often hands on – and that was me."

When she is not running the bases, Diane is a nurse. "I teach CPR, BLS, First Aid. I have 34 years of nursing experience. There’s not anything that scares me or anything I can’t handle." Knowing that means a lot to the parents of the players. She wants them to have that time to sit back and see the pride their child takes in playing ball. "I want them to sit on the sidelines and be able to observe their child be an athlete, a player of baseball. I’ll take care of the stuff on the field. They deserve to watch their child."

Michelle Nielson is one of those parents who has seen her son grow over the years he’s been on the team. "It’s just been amazing to see him progress – when he first started, he didn’t really, he wasn’t into it? Kind of had some meltdowns, he didn’t want anyone to clap for him. So I almost like had to put up a sign saying ‘no clapping!” because he would get upset with that noise. He has just progressed so much over the years. Just so proud. So proud of his accomplishments, he’s come so far," she says.

It is a team effort that makes this league a hit with so many families from Biddeford and beyond – volunteers serve as mentors, coaches, pitchers, and catchers.

"I do this solely just to have fun. I have so much fun coming out here, I look forward to it, if I have something that I have to go to I really miss being here, and there’s no other reason but just to have fun with these kids." Mackenzie Day’s a sophomore at Biddeford High and can’t imagine being anywhere else on a Wednesday evening. She adds, "Typically I’ll like go out in the field and help the kids, make sure they stay on track because some of them have a hard time focusing, but I’m just like there to help them and be their friend and make sure that they’re playing baseball."

There are only a few ground rules that keep these kids batting a thousand. "There’s kind words only, we cheer for each other, you listen to your coach, and respect personal space. And they’re held accountable to that and they… they stand up to that level," says Coach.

"They think it’s silly when Coach jumps up and down, but it’s from the heart because I could not be more proud of these kids – and they’re my kids."

Every so often, we meet someone who seems perfectly suited for the work they are doing. And it’s safe to say – Coach Diane falls into that category. Biddeford Little League’s Challenger Division wrapped up its season this past weekend with the final game on Saturday.