A new team offers new opportunities for these brothers

A new team, offering those with intellectual and developmental disabilities an opportunity to play, just might have something to teach all of us. 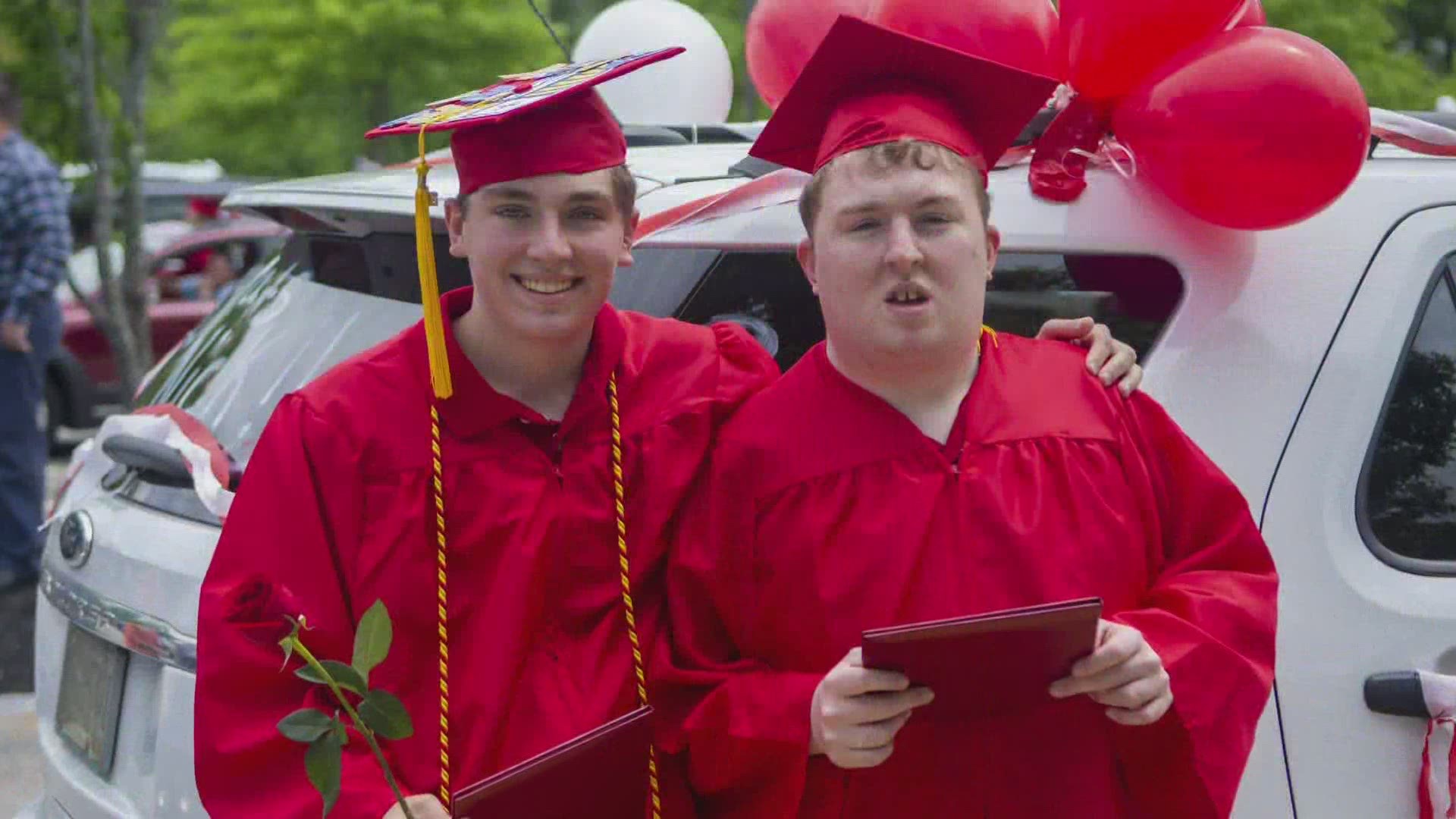 SOUTH PORTLAND, Maine — Update:  Nick & Andrew Varipatis capped off their senior season on Sunday with their graduation.  Both brothers accepted their diplomas in front of family & friends.

Athletics have always been a big part of life in the Varipatis family.

Ted, when he is not in the stands cheering, is often in the booth announcing South Portland football, baseball and field hockey games. Beth rarely misses one of her son’s games. Andrew has played high school golf and baseball, and Nick has been his brother’s biggest cheerleader. "Thankfully, Nick loves sports. He loves watching Andrew play. He comes to all the games, he keeps track of the score," say Ted Varipatis.

But as a family, they never imagined that the day would come -  the day they’d get the chance to cheer on both sons – on the same team. It is the home opener for South Portland's Unified Basketball team. Unified Sports teams up students with intellectual and developmental disabilities alongside students who serve as partners and mentors. They train and compete together, represent their school and play a full season. This is the real deal – fans, cheerleaders, warm-up music and an announcer.

Nick has autism, and this team is something the Varipatis family had waited and hoped for.

During warmups, Andrew Varipatis reflects on his high school athletic career. "My brother, he comes to all my games, supports me, claps on so it’s awesome to return the favor. It’s never something that I thought I’d imagine I’d be able to do. I’ll never forget the first time he got his name called, he announced himself and ran out, probably the happiest moment I’ve seen of his life."

Todd Livingston, the South Portland Athletic Director, sums it up this way. "I wanna cry because it’s just so much fun. For these kids to be out here in front of this many people – the cheerleaders are here – and our basketball teams were here – as you’ve seen, it’s amazing."

"For a lot of these kids its really difficult to make friends, and communicate with other kids. And sports is a way to do that," adds Ted. What gets teased out in this league is kindness – compassion – even patience. Often rebounds are quietly handed back to the shooter – to try, and try again. Head Coach Adam Perron sees qualities in this team that seem to appear on their own. "So how about this? Us as coaches never mentioned anything about that. They just do it on their own. So again, you laugh, you cry, you watch this stuff and...it’s the best part of your day. You know, it really is. At the end of the day, it’s the leadership of the kids on the court, and the kids just having a good time."

In this game, it is brother’s love that quietly and ever-so-gently guides this athlete up and down the court. Nick Varipatis has one of his biggest fans right by his side.  More than anything, they are a team.

"Now we’re cheering on Nick on the basketball court. Which by the way he’s very comfortable on. He knows what he’s doing, he’s seen it for all those years and now he has the ability to go out there and play and be part of the fabric of South Portland High School – be a player – be a student athlete – along with his brother – how great is that, right?" adds Coach Perron.

The game ends with a thrilling, overtime finish – and it’s clear Nick’s ready to get out there and do it again.

For Ted, it is such an emotional moment.  "I’m so proud of them watching them wear the South Portland uniform where I went to high school. It’s perfect really. It’s really special. Knowing that Andrew’s gonna be able to watch after Nicky and be there for him you know after we’re gone. It’s a big deal."

The Varipatis family is a big part of the Newscenter Family – Beth works in the master control room. Ted worked here for many  years in our newsroom. So we’ve watched this family – and the boys - grow up.

RELATED: 40 years of Parkinson's can wear a man down; not Brian Hall

Unified Sports are a partnership between the Maine Principals Association and Special Olympics Maine. If you'd like to learn more, click here.