Students in the Young Writers and Leaders program are visited by a world-famous author who shares his challenges with writing - as well life lessons. 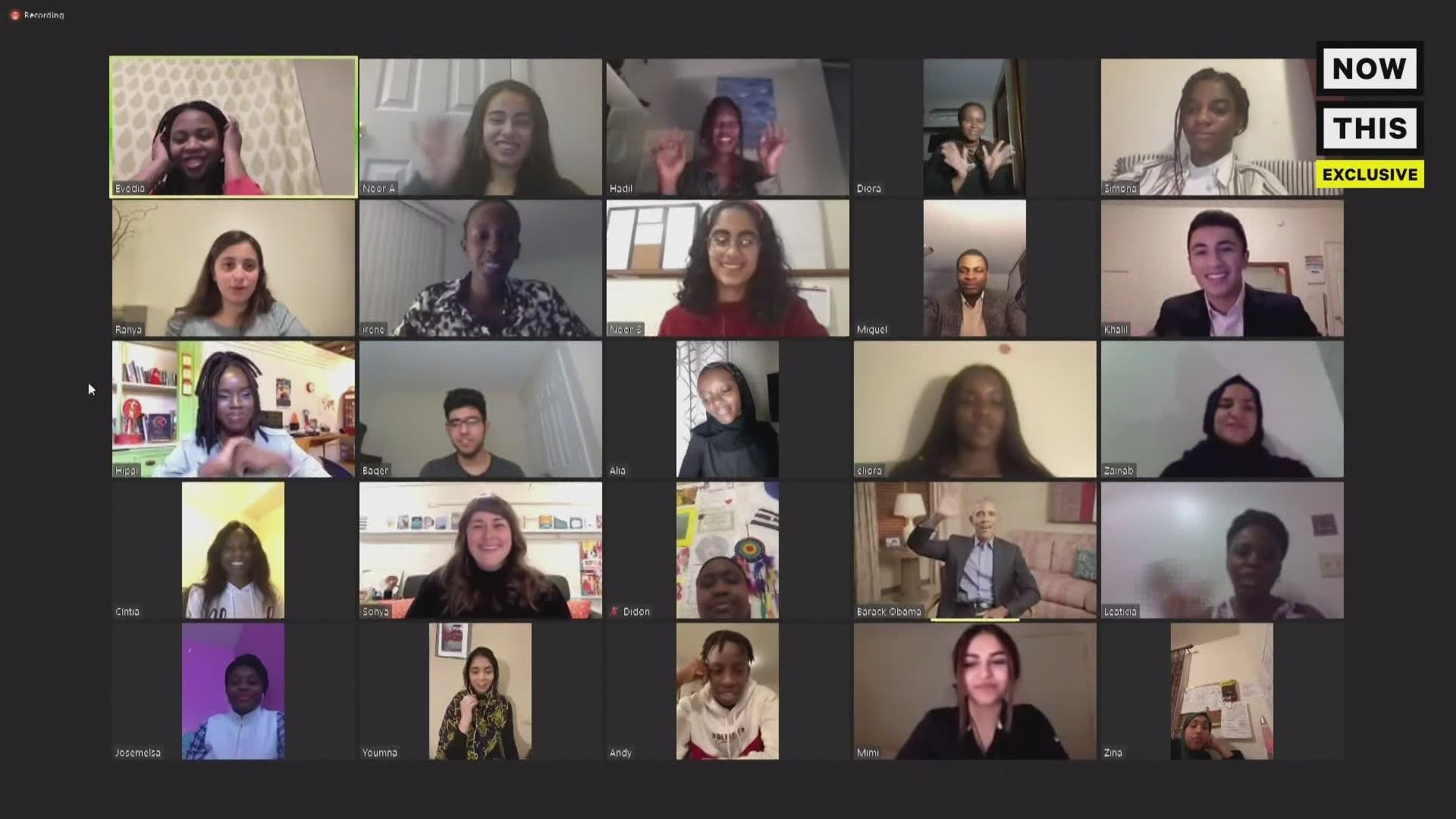 PORTLAND, Maine — Just over five years ago, the Obama White House honored the "Young Writers and Leaders" program at Portland’s The Telling Room with a National Arts and Humanities Youth Program Award, the highest recognition for an afterschool arts program in the country.

Young Writers and Leaders (YWL) is one of the programs at The Telling Room that works to empower students to use their voices through writing to tell their stories and impact change in the world. Those lessons came to life recently when an unlikely guest paid that program a visit.

"They didn’t tell us anything, they just told us to show up," student Noor Sager said. Noor is a sophomore at Gorham High School and is one of 27 students in the Telling Room's Young Writers and Leaders program. Along with the other members of the group, she got called to a Saturday morning Zoom meeting.

"We didn’t know what was going on," Noor said. "We’d gotten a book from Obama like a week prior, they sent it out, but we didn’t know anything else. So we were on the Zoom, and Sonya started reading this letter from Obama."

Sonya Tomlinson is the co-teacher of this program.

“I hope you all received the copies of my memoir 'A Promised Land' that I sent you last month," she read to the assembled students on the Zoom call. "And that you can spare some time from your busy lives as students to join me for a Zoom call on Tuesday so we can talk together about our lives as writers and leaders. Best wishes, Barack Obama.”

And just like that -- an invitation to Zoom with the former president.

"It was a mixture of feelings between excitement and nervousness and happiness!" Youmna Mohamed, a senior at Portland High School, said.

"Obama came to them with his memoir fresh off the presses as a writer, as an author, but there is no denying – I think the oldest student in the program is 19 so for them - many of them – have seen him as the President for the majority of their life. And the first person of color as the leader of the free world. For that? There’s no denying the impact of that for them," Tomlinson said.

The Young Writers and Leaders program is offered exclusively to multi-cultural, multi-lingual students with international backgrounds.

Khalil Kilani, a senior at Waynflete, started off the call:

And with that, for an hour, the former president fielded questions from these students. Here is an excerpt from the call, courtesy Now This:

"Hello Mr. President, my name is Alia, I’m from Rwanda, and my first language is Kinyarwanda…as an upcoming writer, I’ve struggled with seeing beauty in my own writing. I’ve always told myself there was something wrong, even though other people may like it. Have you always liked everything you write?" Alia Usanase, a junior at Deering High School asked.

"No!" Obama replied, laughing. "Some of the time I write, MOST of the time I write I say – this is stupid! Or… this makes no sense, or… this doesn’t sound right. And I get frustrated. And, I’ve crumpled up paper and I throw it in the garbage. Then I start over."

RELATED: 'Anything is possible and he made that very clear': Maine students left inspired following virtual discussion with Obama

Another student asked, "I’m wondering in what ways can someone like me impact change?" The former President replied, "The most important answer is I think you don’t do it alone. He later added, "Learning to understand that having all these different strands of humanity to draw on is a strength. It’s also what’s gonna make you even better writers."

"My name is Ranya Adnan, I was born in Amman, Jordan, but I’m Kurdish from Kurdistan. I personally think that patience is a big part of growing up. My question for you, Sir is, what do you think of the word patience? And how does having it, or not having it, impact being a President?"

"That’s an interesting question," Obama said. "I think patience, like a lot of virtues, is really valuable, but is a double edged sword. I think the dangerous thing about patience is if it turns into complacency or cynicism. If you become so patient that you’re willing to tolerate bad situations."

The Telling Room posted this video about the visit:

The former president concluded by saying, "The final thing that I want to say to you is….and I want to say this to all of you…. I hope you learn from this program – don’t be afraid to reach out to people who are doing what you hope to be doing and ask them to teach you. Or to learn from them. No matter what somebody’s accomplished – the greatest novelist, the greatest surgeon, the greatest political activist – they didn’t start that way. You finding people who can help you on your own journey I think will be important."

The students reflected on the impact this call had on them.

"Each and everything he talked about was sort of a lesson in our everyday life. It was encouragement. So, the whole thing of talking to him is really something special in my life. And I’ll hold on to that," Alia said.

Noor Abduljaleel, a senior at Westbrook High School puts it this way:

"So what I got out of the conversation is it gave me a feeling of hope that maybe I could be in his position someday and the fact that as long as I keep working hard because he didn’t’ start great with his life he was just like us. Then he worked hard and he got where he got. It gave me hope that I can do that one day."

Celine Kuhn, the Executive Director of The Telling Room, said, "We asked them to say one word about what it meant to them and they said ‘dazzling’, ‘ineffable’, ‘surreal’, ‘miraculous’, you know, one of the best things that’s ever happened in their lives and I can say the exact same thing for me."

"He showed them that anything’s possible," Kuhn said. "The impossible can become possible when you can write and tell your story and be an agent of change. It was amazing!"

The Telling Room is putting out an anthology in June – a compilation of their stories – and they plan to send one to Obama. If you would like to hear more of the students and their conversation with Obama, click here.  To learn more about President Obama's visit to The Telling room, click here. For more information about The Telling Room's Young Writers and Leaders program, click here.

RELATED: How does a Maine novelist capture the lives of teenage boys?