It's the end of an era for The Freeport Flag Ladies

FREEPORT, Maine — Freeport is a town known for many things – outlet shopping, summer traffic, and tourists just to name a few. But Freeport is also home to some rather unlikely celebrities – three women who wear their love of country on their sleeves – and shirts, and sneakers.  They have spent the last 18 years honoring country, raising flags, and lifting spirits – having no idea that this 'work' would shape the rest of their lives.

For Elaine Greene, Joann Miller, and Carmen Foote – this early morning walk up School Street has become something of a quiet pilgrimage.

Every Tuesday morning at 8:00 sharp, they assume their post – at the corner of Main and School. "When we were attacked [on] 9-11, and I saw that second plane hit, I knew we were in a bad situation and we didn’t know how bad it could get from that point. It just kinda brought me to my knees and with the deepest prayer I think I’ve ever said, I said “God, show me something I can do for my country," says Green. 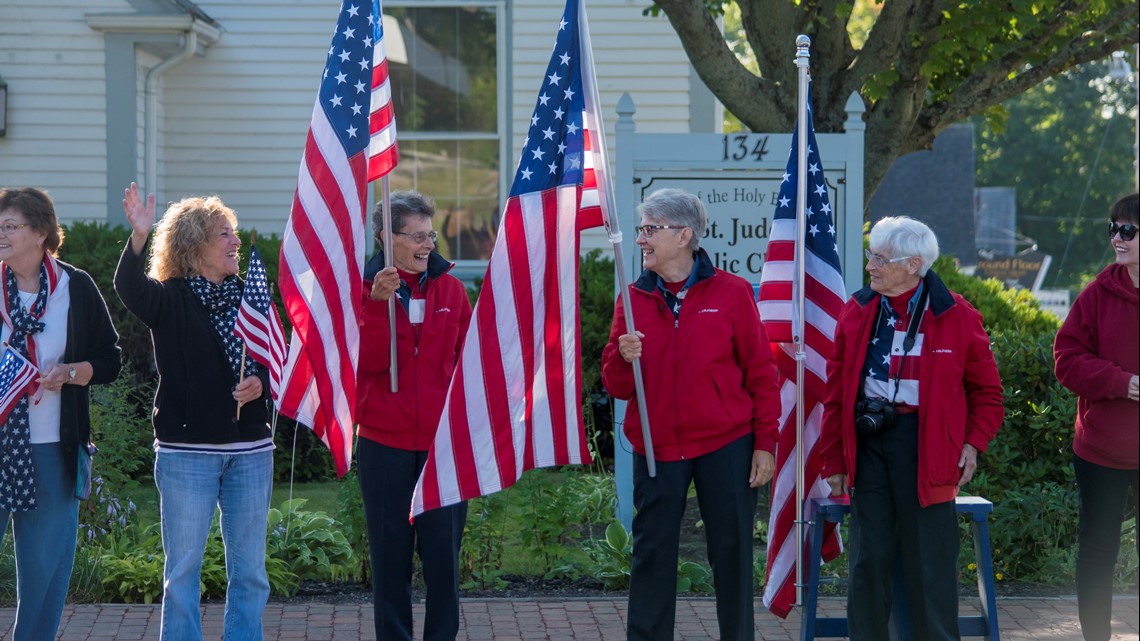 While the country grappled with searing images of destruction and loss, days later President Bush asked people to step outside their homes one night and light candles. "It was a dead-end street at that time, so we decided to come up here (to the corner of Main and School) with our candles. And, people ... joined us, and I looked at the two of them and I said, 'My prayer has been answered. I know what I can do to help my country.' And I asked them to join me for a year." The year was 2001. And these three tenacious ladies have been at it ever since.

That first year, they stood on the corner every Tuesday, the 11th of every month, and every holiday. When the United States went in to the Iraq war, the three were there every single day until the war was declared over. They simply stood on the corner, raising their flags, and waving to everyone passing by. Their mission is to stand in honor of all our military in harm’s way.

RELATED: Who knew crossing the street could be so much fun!

Their flag waving has taken them in many directions. They work with countless Veterans groups, greet troops at the airport, and speak in classrooms to schoolchildren.

"Probably the most meaningful 18 years of my life. It takes you out of yourself and your self-interest and it puts you in a world where you know what’s really important. It gets you to do something for somebody else," says Green.

Each morning that they are on the corner, passersby join in – some old friends, some complete strangers, each telling them about the impact they’ve had.

"They will remember we were here. And they’ll figure out for themselves what the reason might have been. We’ve had parents say 'You give us something to talk to our children about that is patriotic and not political.' There’s so many stories. So everything we do shows the respect for our country."

Elaine Greene smiles as she waves to passersby
NCM

The Flag Ladies have decided to end their visits to the corner of Main and School. But the dedication to country, and devotion to our military and veterans will not stop.

Green sums it up this way: "Our work won’t end until we take our last breath."

The Flag Ladies will have their final morning on the corner on Wednesday September 11th. It is slated to be a huge celebration. They will be on the corner of Main and School from the usual 8:00 am until 10 – and then at 10:15 move to Memorial Park on Bow Street. For more information on the Flag Ladies you can visit https://www.freeportflagladies.com/.