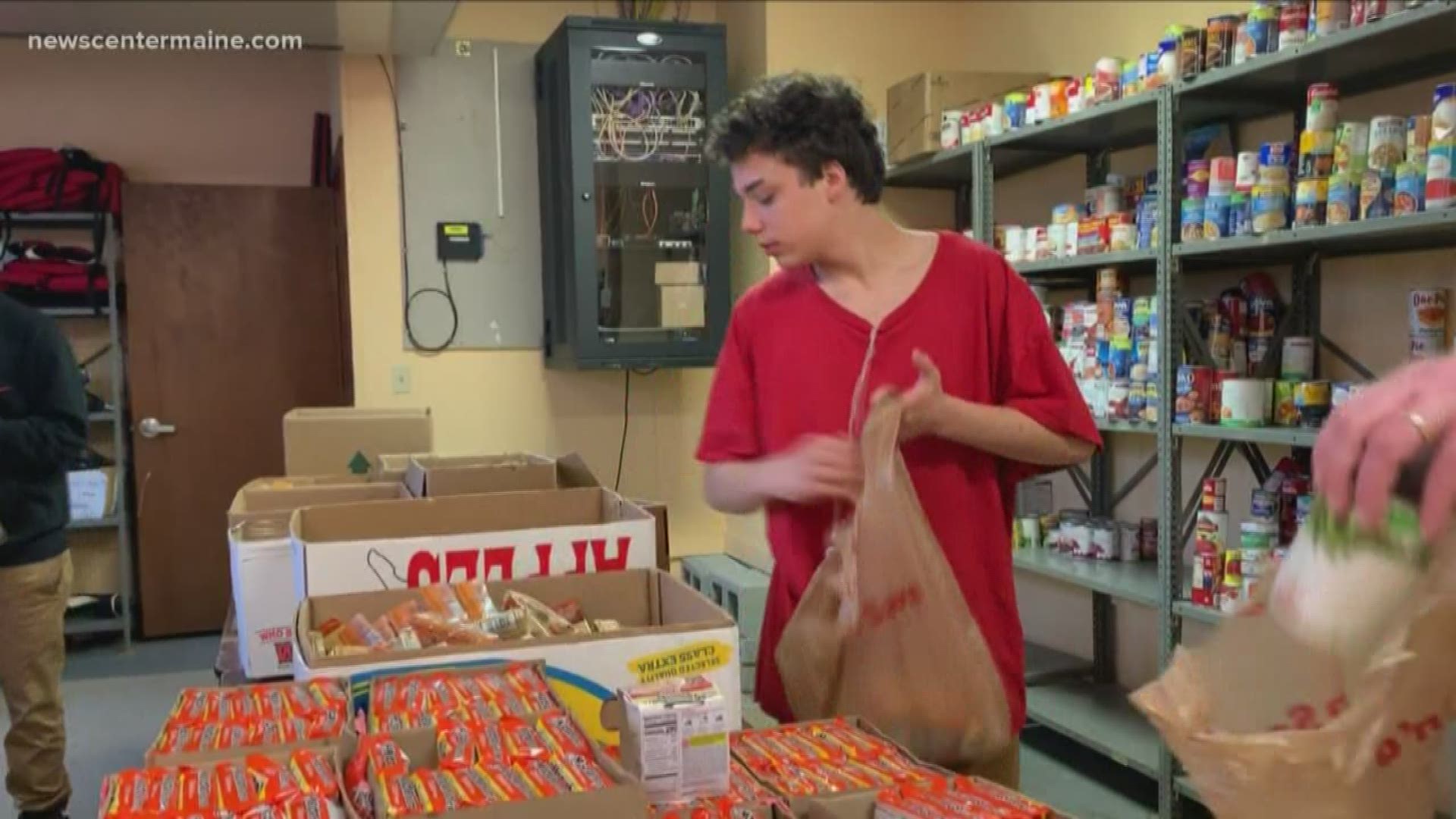 NORTH BERWICK, Maine — With little chatter and no teachers around, half a dozen drowsy students grab plastic grocery bags and assemble a line along a table laid out with boxes of food. Hands are plunged into each box as granola bars, cans of green beans, boxes of mac and cheese and peanut butter are dropped into a bag, filling it within minutes. Its Thursday morning at Mary Hurd Academy in North Berwick and for most of the students, it's just another day.

Shelves neatly lined with canned and boxed goods decorate the former classroom in the basement of Mary Hurd Academy in North Berwick. On Thursdays, the students know they will fill more than 120 bags for students in their school district who do not have enough to eat.

"Its really just to get them through the weekend," one student explains.

Mary Hurd Academy is an alternative school with 37 students, most of them male who "need a different setting than a traditional school," co-principal Andrew Elwell says. Elwell explains that means hands-on learning, quicker transitions, and getting students out of the classroom and outside.

"Service-learning is what we really focus on," Elwell says.

In less than an hour, more than 130 bags are filled, double-knotted, counted and loaded into a van. The students will drop them off at schools around MSAD 60. But this isn't the only thing they do for the program...it is really just the last.

Every week students work four days to make sure that kids facing food insecurity in their community will have enough to eat on the weekend and over holiday vacations. On Monday the students take inventory of what they have, they figure out what they need and go shopping at a local store on Mondays and Tuesdays. On Wednesdays, they pick up food from drop-off locations at schools in the district and at a few community sites and on Thursday they bag it up and get it to the schools where the orders are coming from.

"Not only can they do it really without staff support, other than driving the vans, they also teach one another," Elwell explains.

Senior Artie Lane browses the shelves looking for something to add to the few bags left to fill after the rice crispy treats have run out.

"You want everybody to get the same thing. I don’t want them to be feeling like you’re not getting enough," Lane says. He's been helping out with the program for four years now and has a unique point of view.

"I used to be in the same exact situation as them where I needed this program. Without it I probably would’ve gone nights hungry, honestly," Lane explains with complete candor. His situation has come full circle.

"Now I get to pay it back and it makes me feel happy and an honor of helping the community." An honor in helping and service that Lane says he will continue after he graduates and joins the Army. After that, he thinks he may come back to North Berwick to possibly become a teacher at Mary Hurd Academy.

Credit: NCM
Students at the alternative school Mary Hurd Academy shop, take inventory, package and deliver all the food for students in need in MSAD 60.

"I love this school...Just the staff themselves. They actually care and help us. They always want us to be pushed to our best. They always want us to strive to our best and push our limits." Lane admits he would not be graduating without Mary Hurd Academy and specifically his principal Andrew Elwell. "He honestly changed my life. If it wasn't for him I honestly wouldn't even be in the good of a line that I am toward life."

The students buy food that is easy to prepare and non-perishable.

"We try to keep it a little healthy but we’re running on a little bit of a budget," explains 16-year-old Cody Wilson. The program started six years ago with a donation from the local Lion's Club of $250. Last year students spent $20,000 on food.  A lot of that money comes from school staff who have donations deducted from their paychecks to help the kids they teach.

But at Mary Hurd Academy it isn't just food. Cody Wilson gives me a tour of a very neat and clean free thrift store. "Shirts right here, we got pants, we’ve got a ton of boots," Wilson says while pointing items out.

Students launder and sort the clothes that is then free to members of the public. Lost and found items that are never picked up land in the store and donated items.

"I think it’s really cool that this is run by students and it’s not adults because it really gives us the opportunity to appreciate and really help us help the community like most kids don’t get this opportunity," Wilson says.

"We have fun while doing it too so it doesn’t feel like work feels like something fun to do a hang out with your friends when you do it," says Cory Truman.

Proving service-learning isn't all work. Even though the students at Mary Hurd will never know the kids they are helping they feel the importance of the work they are doing.

"It’s really cool to have this opportunity and help out the community and people around," says Truman. "It feels nice." And hopefully, that is a feeling that will stick with these young teens.

Credit: NCM
Students at the alternative school Mary Hurd Academy shop, take inventory, package and deliver all the food for students in need in MSAD 60.

To learn more about MSAD 60's food insecurity program and Mary Hurd's free thrift store, where you can donate or how you can shop, email co-principal Andrew Elwell at andrew.elwell@msad60.org.

RELAED: One of Maine's oldest diners where locals say 'if you can't handle it, don't come in'

RELATED: Only in Maine can you buy cheesecake on the honor system out of a garage, 24/7