Nikki and Taylor Strout use what fishermen discard in their durable line of bags. 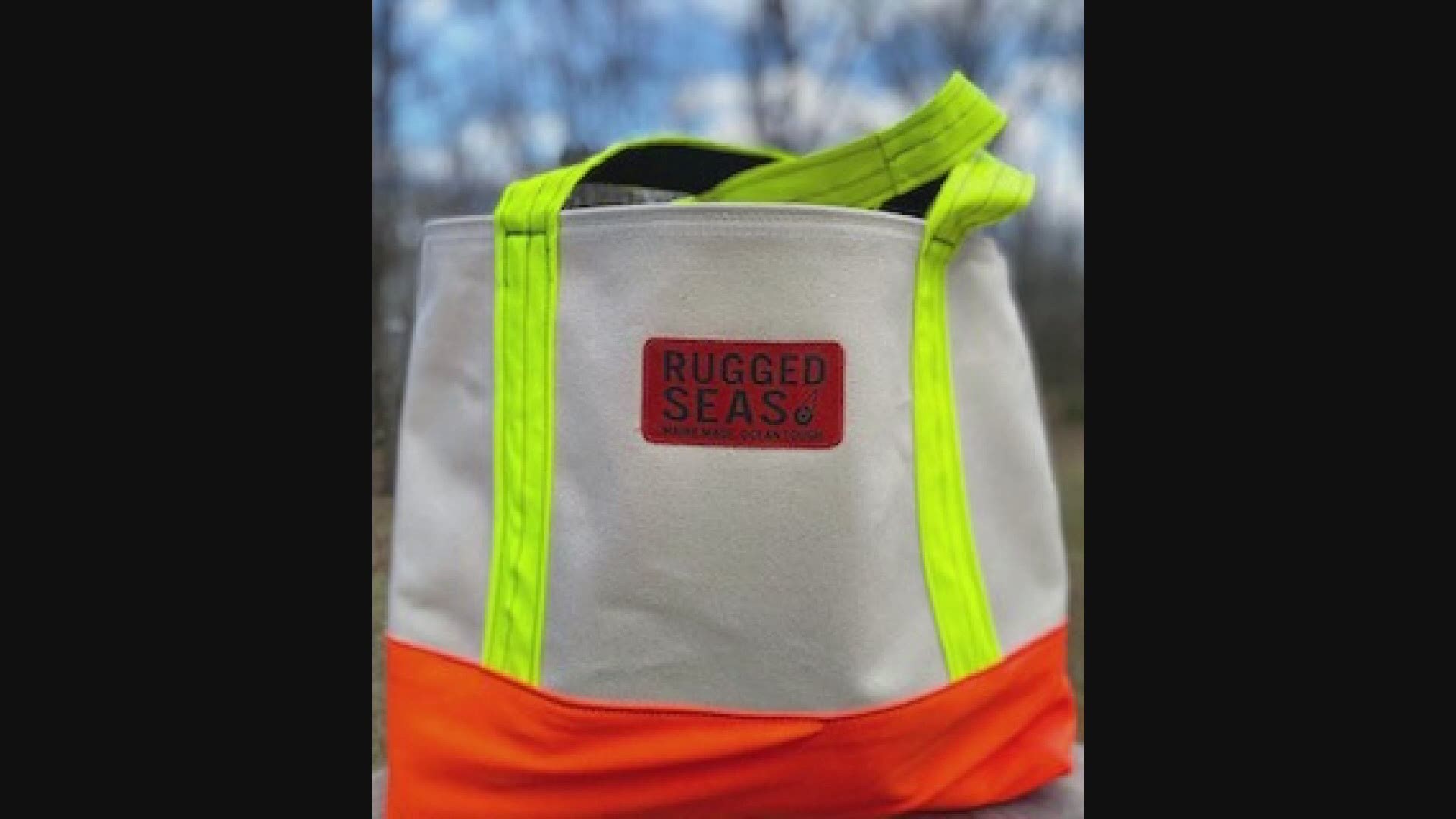 CAPE ELIZABETH, Maine — Talk to Taylor Strout about the Maine fishing industry, and you get a passionate answer. "It’s made me the man I am today. And it’s given me everything that I have around me. It continues to help support my family which I love dearly. My extended family too. And also all the fishing families. Our communities up and down the coast, they build so much character for so many people … it’s the livelihood of the iconic state of Maine."

Safe to say fishing is in his blood.

"I don’t think Taylor will ever stop fishing – he really enjoys what he does. And he’s proud of it.  His grandmother used to take his dad out and row him out when he was little. And hand haul traps out in the bay. He fished with his Dad," says Taylor's wife, Nikki.

Fishing might have been his first love, but in high school someone else caught his eye.

"I always had a crush on her," says Taylor. High school friends, now married and the parents of three little boys, they are both devoted to giving back to their beloved fishing community. Taylor had already built a small business designing hoodies to highlight Maine fisheries. But they wanted to do more.

"You’re also selling a product in this time. So that’s really hard to do. And the idea behind selling the product was we wanted to create a product that not only the fishermen could stand behind and buy – but also the people that would come to Maine because of the heritage in the fishing industry," says Taylor. "All these people travel from all around the world just to see our communities and everyone wants to take a piece of that home with them, right?"

Fishing bibs – those iconic, enormous overalls that every fisherman wears. "One thing we noticed about them at the beginning was – these fishermen never sit down. So the back of all of their pants are pristine. They’re great material. And even the fronts. They show the character and tell the story that we’re trying to tell."

Using old bibs, and remnants from the company that makes new bibs, they’ve created a line of bags, backpacks, and clutches – with the tag line “Maine Made, Ocean Tough”. The bibs are collected, cleaned at Pratt Abbott, and stitched  at Rogue Wear in Lewiston. Their company, Rugged Seas, donates a portion of every sale to the Maine Lobstermen’s Association and The Maine Coast Fishermen’s Association.

Nikki recently showcased some of the products at the Fisherman’s Forum and the word began to get out. "I had people leaving and going to their houses and picking up old bibs and bringing me trash bags full of stinky bibs and dropping them off and it was so exciting and so awesome!"

It was that energy that gave them the nudge to launch this business at the outset of the pandemic. "It wasn’t a time to back burner this idea, it was 'well, we need to raise a lot of money, we need to try to do as much as we can' ...The lifestyle’s just so different. We need to make sure that they feel like this is sort of an accurate representation of this lifestyle. That was the biggest goal. Our bags try and do the same thing. The wear and tear that’s on those bags, that’s kind of the wear and tear that happens on the industry and you just wanna show that image to everybody and tell that story."

Nikki and Taylor somehow manage fishing, and three little boys, and running a small business. Recently they learned that two of their little guys have a genetic disorder which will eventually diminish their eyesight. It makes each moment – rugged seas and all - – all the more important. "It’s something that we want to carry on and teach our boys. So many people come from all over to see this beautiful state and what we’ve have here. It’s really precious and it’s something totally worth fighting for. And standing up for and making sure that it stays the way that it is and the way that we all remember it."

Because the bibs have a real variety of wear, essentially no two products look the same.  And Taylor and Nikki envision Rugged Seas being able to spread up and down the coast as they collect bibs from different fishing communities, and ear mark the proceeds to those local fishing organizations.  If you‘d like to learn more about the line of Rugged Seas products, click here. To learn more about the Maine Lobstermen's Association, click here, or the Maine Coast Fishermen's Association, click here.

RELATED: Getting to know Maine's biologists and researchers through a podcast