Ring, lost and found on a Maine beach, returns to its rightful owner after 49 years

Elmer Fox, 93, found a ring with his metal detector on Popham Beach in 1980. He held onto it for 39 years until a friend helped him track down its rightful owner. 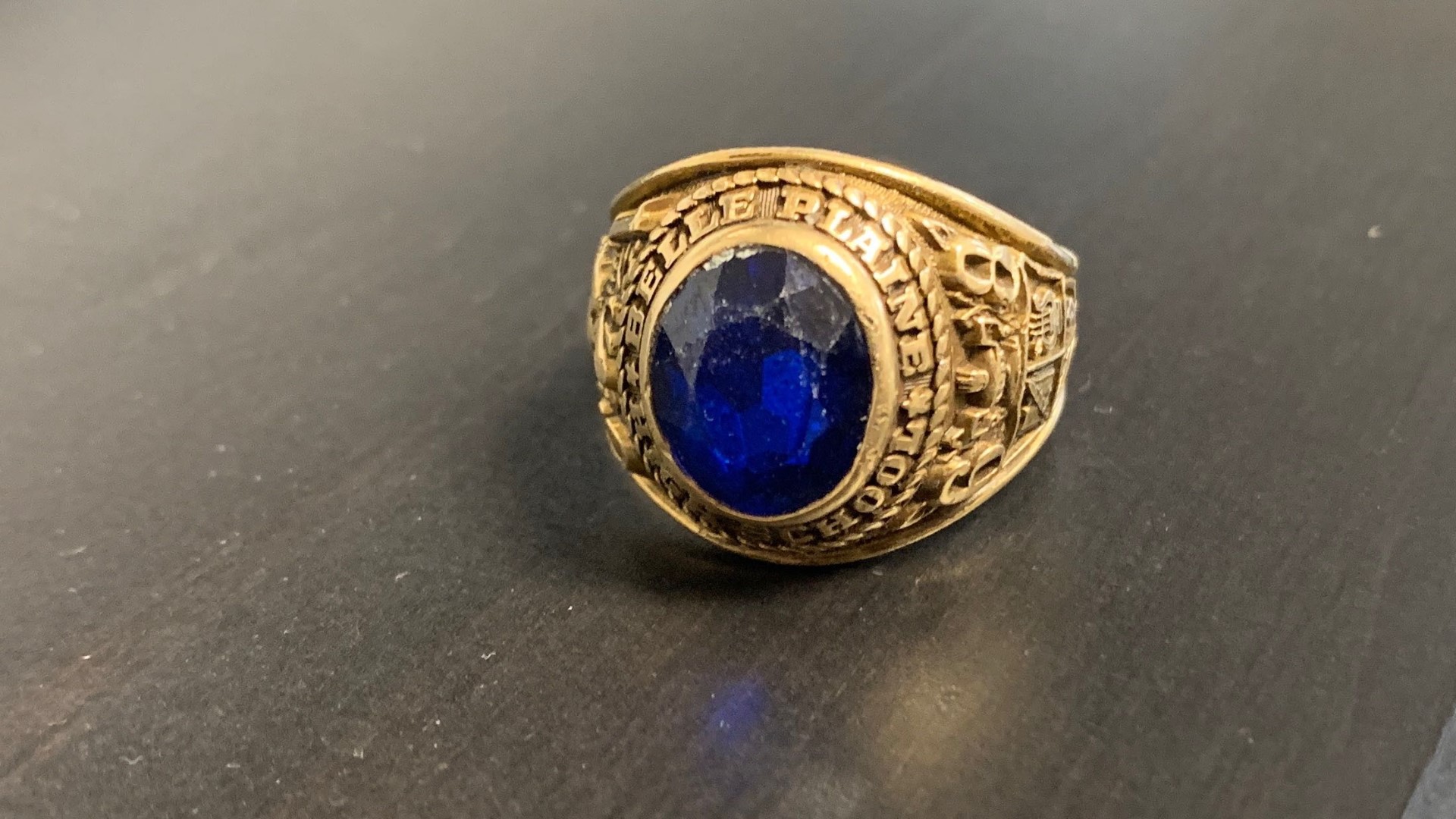 The World War II veteran recently moved from his Bath home, where he had lived for 40 years, into an assisted living facility. During the move, he made a new friend, John Mullaney, who started helping Elmer sort and organize his extensive collections of stamps, pins and antiques. But what started as a simple gesture has blossomed into a friendship.

Elmer's hearing is less than perfect and he gets around with the aid of a walker, but his recollection is sharp. "Our family was a bunch of pack rats," Elmer admits. He says, growing up in the Depression, his family saved everything they could find. Elmer's new cottage apartment at the Plant Memorial Home is a testament to his family culture even thought it holds just a fraction of his years of saving.

Elmer shuffles into his office and pulls out rusty license plates from 1914 and 1917, delicate toys that belonged to his aunt and uncle from the late 1800s, and presidential pins.

Elmer and his "hunting" buddy went from Old Orchard to Pemaquid Beach and every playground in between, swinging metal detectors in search of treasure.

"I always like to hear that beep, whether it’s a penny or a bottle cap or anything. I always dug everything."

But there were some valuable coins in the mix including Elmer's rarest metal detector find - an 1819 penny. Over the years he found thousands of coins and sold them for a small profit. But it was the hunt Elmer really enjoyed.

"I hunted for about 25 years until my arms got so bad I couldn’t swing [the metal detector] any longer."

But one find never sat right with him. He dug up the ring while metal detecting on Popham Beach in 1980. After years of being tucked away, it resurfaced during his move. He showed it to John Mullaney and said, "This ring has always bothered me because I’ve always wanted to find its rightful owner."

Credit: NCM
This High School ring was lost on Popham Beach in the summer of 1970, was found in ten years later using a metal detector and was returned to its owner 49 years after it went missing.

Like a good friend, John - now turned detective - was on the case of the lost and found ring. The clues were in plain sight. The name of the high school, Belle Plaine, and the year, 1968, were clearly visible. And three faint initials, R.L.P., engraved on the inside of the ring, would make the detective work much easier.

"I said, 'Well Elmer, I think we might be able to help you out with that.'" John offered his help and went home and started searching. Turns out there are several Belle Plaine High Schools in several different states. But after a couple of emails and a few phone calls, John had a name. Richard Petersen went to Belle Plaine High School in Iowa and still lives in Belle Plaine.

On one afternoon in November, Elmer and John sat down to FaceTime with Rich and talk with the man for the first time.

"Good morning, Elmer and John," said Rich by way of introduction. "When I got that call the other day, I just can’t hardly believe it."

In 1970, Rich was stationed at the Naval Air Station in Brunswick. He had only been in Maine for about a month when he and some buddies drove to the coast for his first view of the Maine shoreline. He remembers when the ring slipped off his finger and into the Atlantic Ocean with perfect clarity.

Credit: Rich Petersen
Rich Petersen (far left) from Iowa had only been at the Brunswick Naval Station for a month when he lost his High School ring on Popham Beach.

"I didn’t realize how cold the water in Maine is. It must’ve shrunk up my finger because the ring slipped off rather easily," Rich recollects with laughter. "I thought, well, that’s the last time I’m gonna see that."

Elmer can't remember where on Popham Beach he found the ring 39 years ago and pressed Rich, who lost it ten years prior, to remember.

"Oh, it’s been 49 years ago ... But I think I was on the south end of that beach if I remember correctly," Rich says.

Elmer shows Rich the ring that had been buried in the sand for ten years and then buried in Elmer's collection for decades more. Elmer, John and Rich share a laugh and admire the good condition of the ring.

Rich recently shared with a friend who was wearing a high school ring how he lost his in the cold Maine ocean. And the ring has special sentimental value because he started dating his now-wife of 49 years when he bought the ring, and she wore it as they went steady.

"I sure do appreciate it, Elmer," Rich said through the iPad. "It just amazes me that there are people like you that would make the effort to find the owner of a ring like this."

"I'm glad you're gonna get your ring back," Elmer replied. "Don't come back and lose it again there because I won't be able to find it again," Elmer chuckles.

They exchanged goodbyes, and shortly after, John penned a quick note to Rich for Elmer to sign. John then went off to the post office to drop the ring in the mail to their new Iowa friend.

"Elmer's just a delightful man…He’s got a great heart," John says as he turns to his friend. "I must say that, Elmer, you’re one of the most generous people I’ve ever come to know."

Elmer chuckled his generous laugh and, pointing to John, said, "If it hadn’t been for him, that [ring] still would’ve been in a jar and gotten thrown out when I kicked the bucket."

The two men shared another hearty laugh, something they have gotten very good at doing these days.

Credit: NCM
Elmer Fox sits alongside his friend John Mullaney who helped him find the owner of the High School ring.