Violinist Anna Pearlman plays to a four-legged audience -- and she wouldn't have it any other way. 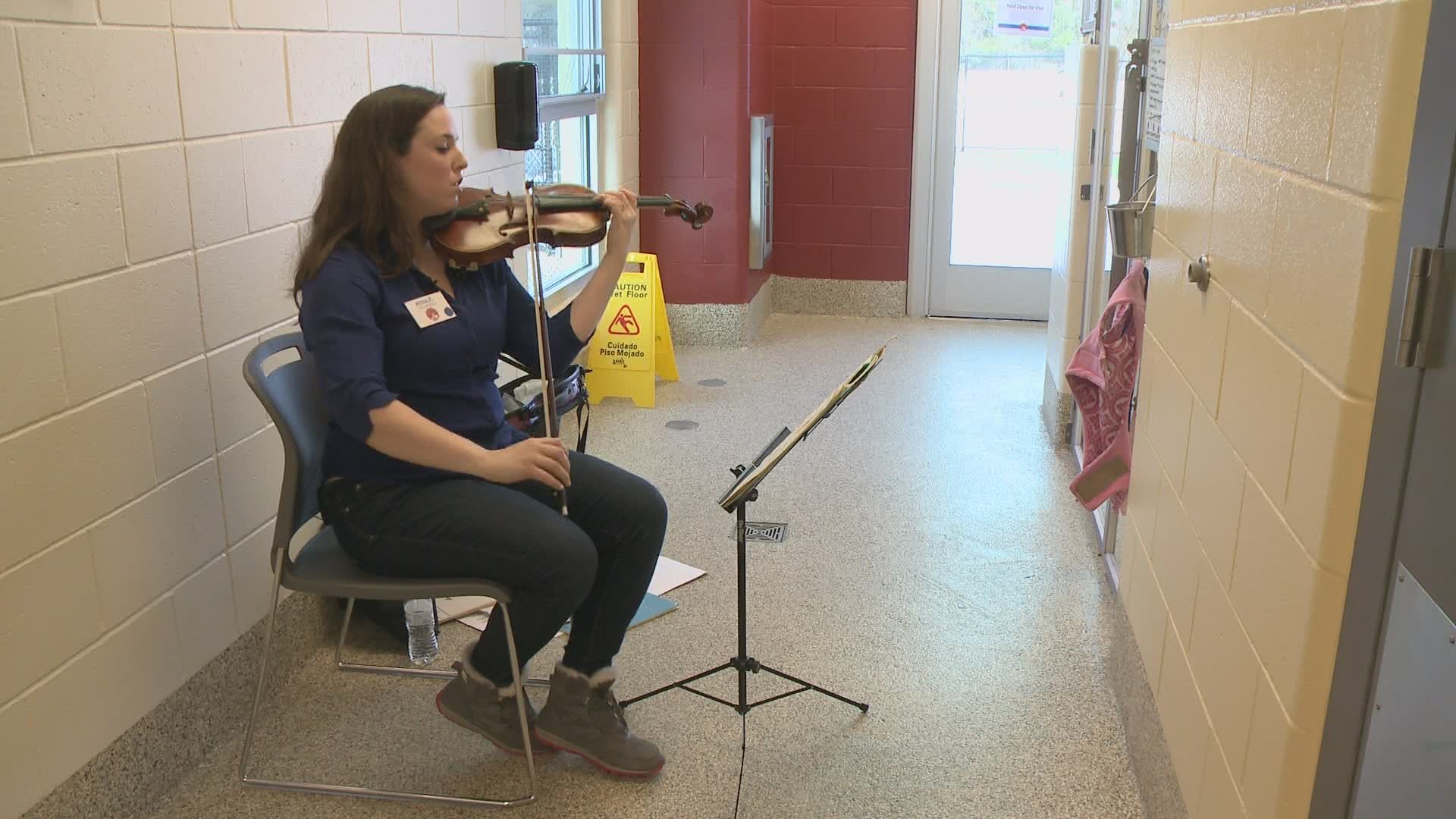 WESTBROOK, Maine — The  Animal Refuge League of Greater Portland has just begun to allow some volunteers and a few visitors back in to their building - and they've continued (through the pandemic) the work of finding forever homes for the animals in their care.

Volunteer Anna Pearlman had an idea she wanted to try – and she had no way of knowing if her music, and her violin might make an impact in the most unlikely of places. No sooner had she put bow to string when she had her answer, and she is now back to her weekly routine of playing a quiet concert for a canine audience.

"It’s a constant parade of people through there. The reaction of the dogs are ‘Hi! Nice to meet you! Let me out! I wanna say hi!” so it’s not a lot of down time for them when we’re open to the public," say Jeana Roth, the ARLGP's Director of Community Engagement.

The dogs are hopeful that maybe that smiling face passing by their enclosure just might translate to a forever home.  "As much as we want to be a home like environment this is not home. A shelter environment is naturally more stressful for an animal. It’s not a living room with a couch and a person to snuggle. We love each of them like they are our own, but this is not a substitute for a home."

Life in the shelter is anything but peaceful. But on Wednesdays, things around the shelter have taken on an entirely different tone.

Anna Pearlman knows the impact music can have on people, which is in part what inspired her to reach out to the Animal Refuge League to see if they’d let her perform for some of their four-legged residents. "I really just wanted to try it one time just as a trial – because what if they started freaking out!" she says.  And with that, she showed up with her instrument in hand.

"There’s four different corridors in there – so I first started and I would move around a little just to see  - mostly so that all the dogs could see what that noise was."

At first - It was hardly music to the pups’ ears. But that did not deter Anna. "I didn’t know what to expect. But I do know animals respond really well to music."

"This gives them a little bit of peace and quiet on a day when we’re not open to the public, so it’s not a constant stream of visitors. It’s a moment of pure quiet in there for them, which just helps to enable them to shut their minds off and just sleep and rest," says Jeana.

Credit: NCM
Music sets the dogs at ease while they wait for their forever homes.

For those two hours  - as the notes from a quiet concerto drift through the space, you can see – one by one – the dogs pausing, letting go, simply giving in to the music and the peace.  As the shelter violinist, Anna plays for a new audience each week  – most dogs are not here too long before they find their forever home. But Amber, well – Amber’s a different story.

"Everywhere I moved, she was the only one left barking. Finally, I just set up right in front of her. And played. And she barked and barked. Probably ten minutes in, the barks got fewer and farther between, she eventually actually just curled up and went to sleep."

Jeana say, "I think for long term dogs like Amber who she sits in front of and really connects with -  it’s hugely impactful for a dog like that. Amber’s been with us several months looking for a home.  Dogs learn to predict things, Amber recognizes Anna at this point – so when Anna comes in and sits down, Amber’s no longer stressed or reactive to the stranger, she recognizes Anna and she enjoys what Anna is providing to her."

"It inspires me to play with more emotion and more heart. Because I know that it just directly effects them. You can’t always tell what people are thinking, but the dogs are …it’s pretty obvious when they finally lay down in their beds and curl up and go to sleep." And for Anna Pearlman, who routinely plays with the Portsmouth Symphony and the Southern Maine Symphony – there is no other concert hall that she’d rather perform in.

"This is the best audience though…this is better than any…it’s the best."

Anna is the concert master of the Southern Maine Symphony, and also performs with the Portsmouth Symphony. For more information, click here. To learn more about the work of the Animal Refuge League of Greater Portland in Westbrook, click here.