Neighbors in Maine community get closer during pandemic

The neighbors that live at Munjoy Heights Condos in Portland are spending more time together now than they did even before the coronavirus as they practice Qigong. 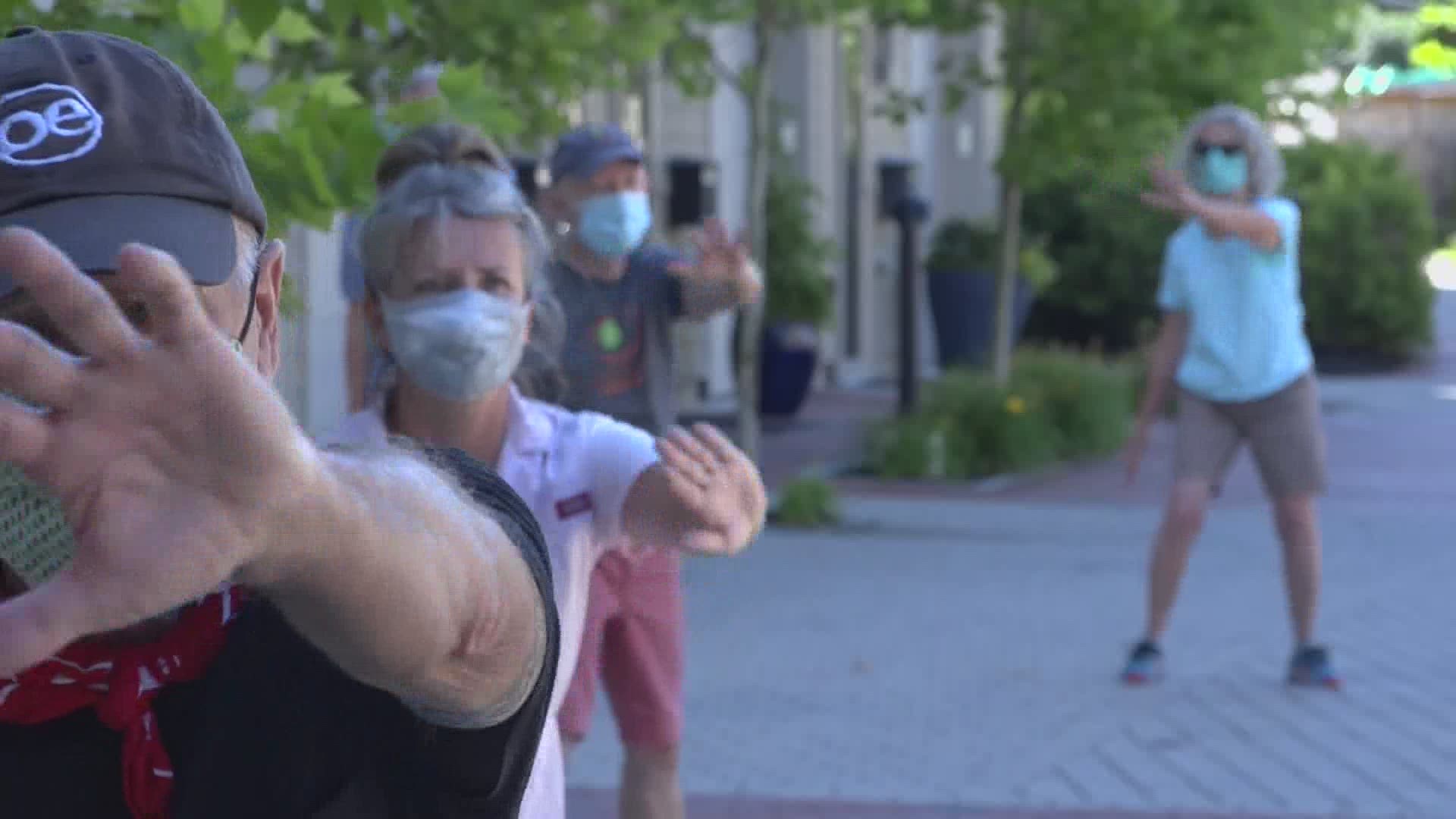 PORTLAND, Maine — *Correction: Woonerf is a Dutch term. Not a Scandanavian one.

Neighbors at Munjoy Heights Condos in Portland are seeing more of each other than they ever have before. Every morning, armed with their facemasks and standing at least six feet apart, they gather just outside their front doors to practice Qigong.

At one end of Sheridan Street, which looks and feels more like a patio than a roadway, Richard Marino instructs his friends - as he has been doing for the last four months - in the art of Qigong.

"Its a combination of a range of motion movement, meditation, and rhythmic smooth breathing. " Marino says Qigong is similar to Tai Chi only 'less formal.' Marino has been practicing for almost a decade and when a neighbor suggested he share with the group as a safe pandemic activity he obliged.

By late July, when I visit, the early sun casts a steep shadow on the street, dividing the residents in light and shade. After practicing every day for 30 minutes this small band of around a dozen folks have the routine down, they know what they are doing and Marino barely needs to utter a word of instruction other than an occasional, "reverse."

Its a quiet time.

Some of the neighbors explain it as 'refective', 'meditative' but it also a chance for the people who live here to see one another, catch up, and check-in with one another.

"We are so fortunate that we chose to live in this community," says Linda Englert who moved into one of the condominiums with her husband Michael a year ago. "It has turned out to be the most supportive, friendly, energetic group, and in a kind of strange way this COVID-19 is giving us the opportunity to get to know our neighbors a lot better."

Englert echoes the sentiments of other neighbors who enjoy having a routine thing to do every morning in this strange everything-is-canceled world of the pandemic. She says Qigong is also helping with her balance. Sandy Marsters says it has brought back his range in motion in his neck.

But it's not just what the neighbors are doing but where that is so unusual. Their street, lined with pavers, friendly flowers, and thoughtful shrubs, looks more like a private patio area than a road But this multipurpose street that serves as a driveway and a common causeway connecting to Portland Trails and the community garden, is a place anyone is welcome to walk. Its called a woonerf, a Dutch term that describes a living street, common in parts of Europe that includes shared space with low-speed limits.

In a world where 'Keep Out' and 'Private' signs are prevalent, these neighbors are welcoming everyone to their woonerf.

"Neighborliness is a wonderful thing. You can be private in your unit as long as you want but if you're missing too long people are going to check on you," says Sandy Marsters who's grandkids come to ride their bikes on the woonerf.

"Everybody brings something to offer to a community even people who don't necessarily participate a lot. They still have something to offer. Community is a great thing," says Marino. Like his neighbors, he prefers to live in a place where the emphasis is on the whole, where people look in on one another, lend a can of paint, retrieve packages from doorways, and water plants.

"I like a neighborhood where I can relate to people and see people. If I didn't like that I would live out in the woods somewhere. I enjoy people," says Marino.

The design helps shape the welcoming attitude. As they practice their qigong, runners pass, children with their mother water plants and two men on a hike pass from the Jack Path of the Portland Trail.

"A lot of people just come through and kind of just really enjoy it," explains resident Kevin Schochat.

While some people are concerned about where their property line starts and stops, these Mainers believe having something special is worth sharing.