They turn research into advocacy. "We can make a difference." 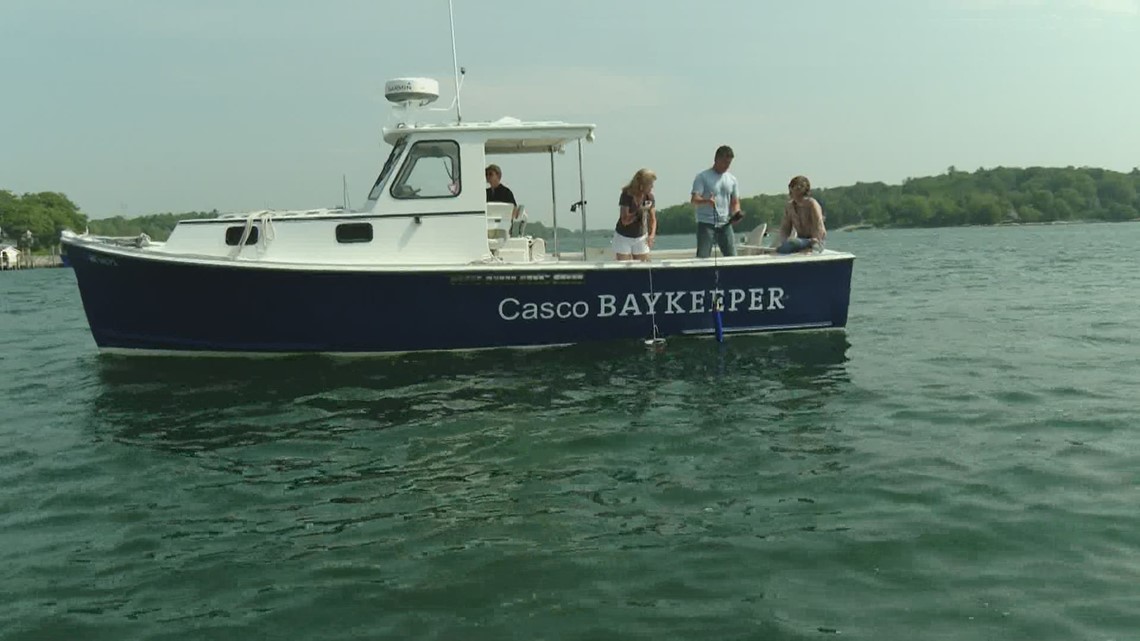 PORTLAND, Maine — Should the health of our oceans be a concern to us? If our oceans become warmer or more acidic, will that impact Mainers? The folks at Friends of Casco Bay answer both of those questions with a resounding "yes."

207 joined two staff members of Friends of Casco Bay aboard the group's boat, The Baykeeper, to see firsthand how they monitor the health of the bay. Our coastal waters, in one way or another, impact every Mainer, whether through the food we eat, our livelihoods, or our recreation. There are measurable changes happening in our ocean. What will that mean for our state?

We started our morning with yet another question: Where exactly does Casco Bay begin and end?

"Generally I like to say that Casco Bay runs from Cape to Cape. Cape Elizabeth to the southwest, kind of diagonally up to Cape Small in Phippsburg in the northeast.  So that means Brunswick, West Bath, Phippsburg, Harpswell, that’s all still Casco Bay. It is ….very large," staff scientist Mike Doan said.

For a body of water like Casco Bay, small changes can have big impacts. Analyzing those changes is Doan's work.

"We’ve been monitoring water quality for three decades now and we have seen some improvement in some areas but we’re also seeing warmer temperatures, we’ve seen more acidic water in Casco Bay," Doan said. "As climate change becomes more and more of an issue here we’re shifting our concern more in that direction."

Baykeeper Ivy Frignoca describes herself as the “Lorax” of Casco Bay, referring to the Dr. Seuss book about the environment and the character that "speaks for the trees."

"In essence being a waterkeeper or a baykeeper is being the voice of the bay. I speak for the bay," she said.

Frignoca gives voice to the sense of urgency she feels.

"Casco Bay is changing really quickly now. And it’s changing in ways we didn’t even know we needed to look at 30 years ago in response to the effects of climate change," she explained. "That includes changes in weather patterns and all that are influencing what’s delivered to the bay and the conditions of the bay. And so, we’re studying a piece of the puzzle."

To capture their piece of the puzzle, Friends of Casco Bay uses three monitoring stations at different parts of the bay to collect hourly, round-the-clock measurements. The stations are modified lobster traps built specifically for this purpose, this one near Cousin’s Island.

Doan discusses some of the markers he tracks to assess the health of Casco Bay.

"Nitrogen is, in simple terms, plant food. So the more nitrogen you have, the more plant matter you’re going to have. The more biology, the more growth. And we absolutely want some growth. We are a very productive bay, we want to keep it productive. It’s just that there are problems with too much nitrogen. And too much growth, too much algal growth," Doan said.

The acidity of the bay is something else they monitor closely.

"Shellfish have a harder time forming shell, that shell material just doesn’t want to stay together when the acidity is too high," he said. "It impacts the thickness of the shellfish."

The health of Casco Bay is the sum of its many moving parts, fluid and intertwined, each different marker impacting every other marker. Any one factor, though, can have its own impact. For instance, why does it matter if the water is warming? Doan put it this way: "Everything that lives in here has a specific temperature range that they like to live in. As that range shifts warmer critters are gonna move north perhaps to follow to get to the colder water or we’re gonna see species from the south moving up."

The Friends of Casco Bay has six years of data from this station, information that is helping them to identify trends. Turning research in to advocacy is at the heart of what Frignoca does.

"I feel so passionately about this, I mean Casco Bay is really at a tipping point," she said. "And we must act swiftly to keep us from going over that precipice and really seeing the bay being harmed by the impacts of climate change and the other pressures from all the built environment on the bay…so what I love about our work and what we do, obviously we need to think like the old adage says ‘think globally and act locally’ and because it’s a bay – it’s a big bay – but it’s a bay...we can make a difference. And I feel like that’s the role of our organization. Each one of us contributes to making a difference and improving and protecting the health of the bay. That’s it in a nutshell. I know that at the end of my life’s work, my goal is to leave the bay better than when I became the baykeeper."

The hope of Friends of Casco Bay is to go beyond raising awareness, by changing laws to protect coastal waters. The organization has numerous opportunities to volunteer, including serving as a water reporter. Click here if you would like to learn more about Friends of Casco Bay.