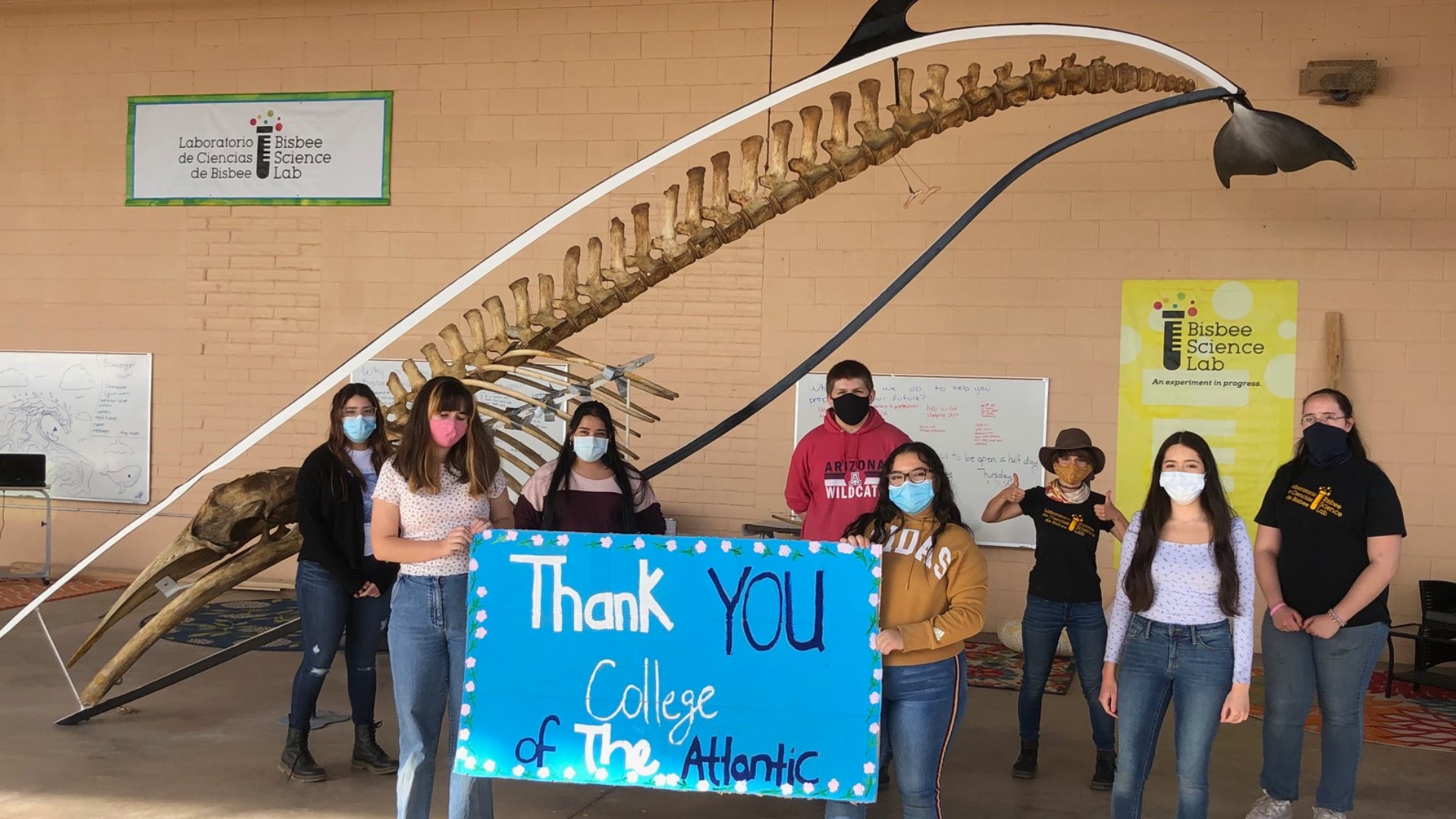 BAR HARBOR, Maine — What weighs 400 pounds, is longer than a pickup truck, used to live in the Atlantic ocean but now is surrounded by a sea of sand in the Arizona desert?

It's a Minke whale skeleton delivered nearly 3,000 miles from the College of the Atlantic in Bar Harbor, Maine to the Bisbee Science Lab in Arizona all thanks to  Captain Toby Stephenson.

"When a kid walks into a museum and they look up and they see a big skeleton ... its a garden for their imagination to grow and really flourish. Big skeletons grow big ideas and big imaginations," says Stephenson who has been teaching at the College of the Atlantic for a decade and captains the schools' research vessel.

Credit: contributed
Captain Toby Stephenson of the College of the Atlantic delivered a 400-pound minke whale skeleton to the Bisbee Science Lab in Arizona in November 2020.

Stephenson has a friend and former colleague at the Science Lab in Arizona which is a free facility that serves middle school and high school students. Together they hatched the idea to bring a marine mammal to the dessert. It was fate because this particular skeleton had been looking for a home. She had been housed at the now-defunct Bar Harbor Whale Museum after washing ashore in Harpswell in the 80s.

The idea was simple: inspire students in a land-locked state to think about marine life. How to get a massive, 22-foot long skeleton thousands of miles during a pandemic, was a little more complicated.

Stephenson, with the help of his 13-year-old daughter, rented a UHaul and with lots of help loaded the skeleton and drove it across the country. What's the hardest part of moving something of this size and sensitivity, I ask Stephenson. "Loading and unloading," he chuckles without hesitation.

Credit: contributed
Minke whales are members of the baleen whale family and are the smallest of the rorquals.

When the Stephenson's arrived with their fish out of water in Arizona, staff from the Science Lab and students helped clean, repair, and install the skeleton. It was also a time for Stephenson to teach them about whale anatomy.

"Whale skeletons are great seeds for wanting to learn and understand what is so wonderful about our world," says Stephenson. He hopes students far from the ocean, will begin to think about the sea and the impact they have on it.

Credit: contributed
Students at the Bisbee Science Lab in Arizona who helped install a minke whale skeleton given as a gift from the College of the Atlantic.