When Joe Gray and Aiden Marks of Cape Elizabeth launched a message in a bottle they never thought it would be found twice and returned to sea within a few weeks. 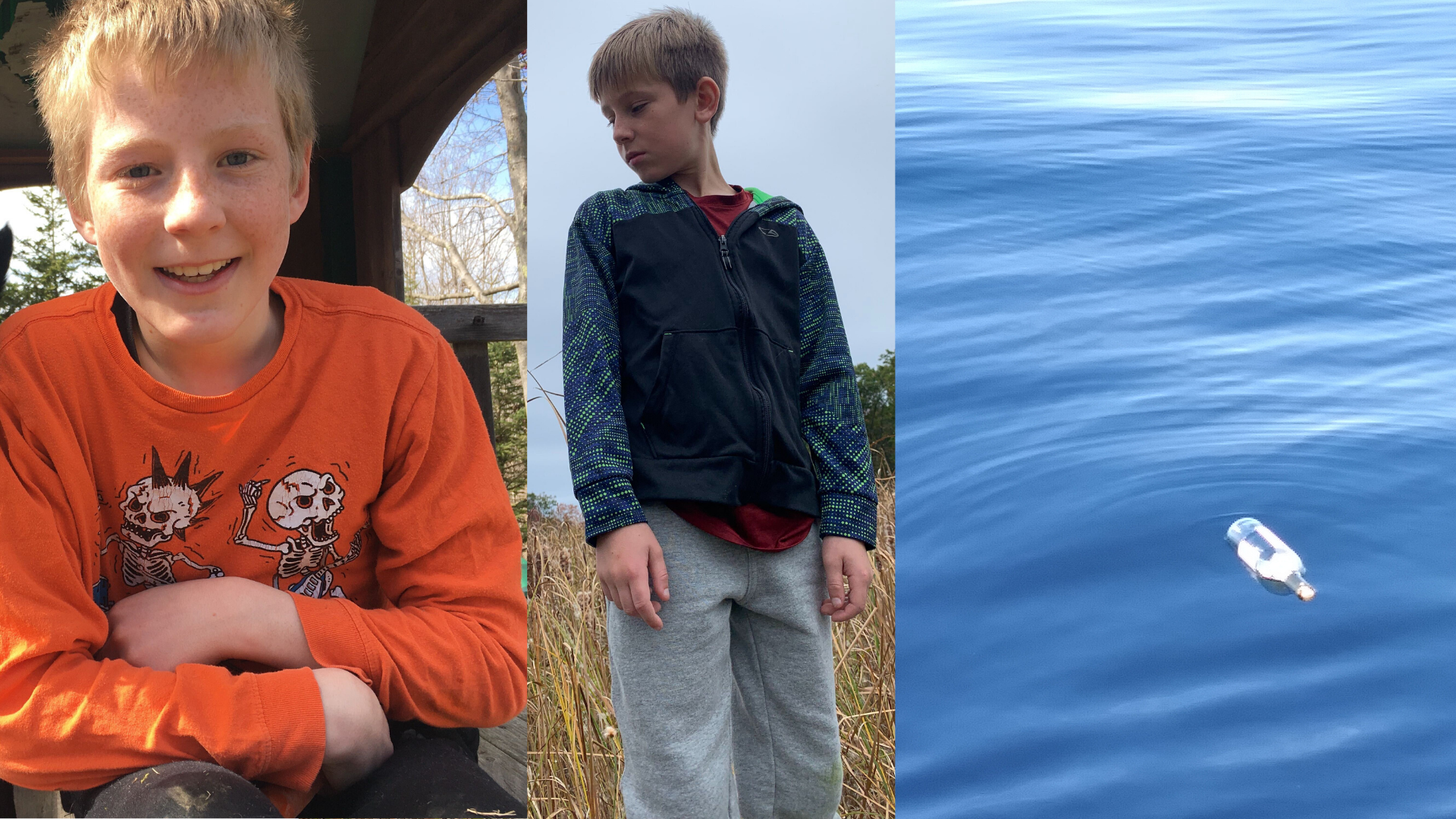 At a time in life when so many people are feeling disconnected from others,
something that could not be more simple is bringing strangers together.

"Our paths wouldn’t have crossed in a million years," says Jeanne Blake of Gloucester, Massachusetts. Jeanne was out on her daily walk on a beach on March 17 when she spotted what would turn out to be a treasure, a bottle rolling in the surf.

She took it home and tried to pry a note that she could see two people had written on but she couldn't without tearing the note. Jeanne broke the bottle and found a note from Joe Gray, 10, and Aiden Marks, 11, of Cape Elizabeth more than 100 miles away.

The bottle had been found by a family in Biddeford. They had signed the note and returned it to the sea as Joe Gray had instructed in his well-written note.

"It was Joe's idea," Aiden Marks explains. The boys have been friends since kindergarten.

"I just wanted to do it because it was a nice day. Aiden was coming to my house anyway," Joe Gray explains of the day in late February when the boys made a raft and attached a Jarritos soda bottle with their note from Broadcove Beach just up the road from Joe and Aiden's homes.

"I wasn't really expecting it to go anywhere," Joe explains. This is not Joe's first time launching a message in a bottle. He can't remember how many he's sent into the Atlantic ocean but he thinks its around a dozen. In 2018, one that he and another friend launched was found north of Bar Harbor.

Credit: contributed
In 2018, Joe Gray and his friend Duke, sent a message in a bottle that was found north of Bar Harbor. Joe has sent out more than ten messages in bottles.

"I was really surprised because I didn't think it'd be able to go that far I thought it’d just crash on the rocks," Joe explains.

Adian was equally surprised that not one but two people found their message."I was like how many bottles are in the ocean?  Like you can find one! I wasn't expecting it to be found that quick," says Aiden.

Jennifer Gray says her youngest son Joe is a very creative child who enjoys being outside playing with neighborhood kids. Joe is a boy scout, makes soaps with his mother as a hobby and even knits.

"They're always adventurous, always. They’re thoughtful and nice boys too," Michelle Oliver says of her son Aiden and Joe. Both mothers say the boys have been excited not only to hear from the people who have found their bottle but from attention from newspapers and our 207 show.

"Our boys were just playing. They were just doing what they always do. For this to come of it It's been really cool for both of them during this really weird time when both of them are just kind of stuck with not much to do," says Michelle Oliver.

"We're all a little cooped up and it's nice to feel like we have no boundaries no borders," says Jennifer Gray.

Jeanne Blake says she was thrilled and felt an immediate sense of connection with the boys, but admits it was probably heightened because of the coronavirus pandemic

"I feel like the bottle kind of found me," says Jeanne Blake. Jeanne was determined to honor Joe and Aiden's wish to get the bottle out to sea. But after two failed attempts she turned to a local fisherman who she had met in January.

Credit: Jeanne Blake
Jeanne Blake tried to return Cape Elizabeth boys the message in the bottle back to sea.

"When I first got asked to bring the bottle out I thought it was just like an errand," explains fisherman and owner of a yarn store.

The more Robert thought and learned about the boys in Cape Elizabeth, the more he was impressed with them. He says the boy's message showed faith that something beautiful can come from something mundane.

Credit: contributed
Gloucester fisherman Robert Porter brought Joe and Aiden's message in a new bottle out to sea, 13 miles off the coast.

"When you think about how big the ocean is and how small that bottle is and the concept of that message and then to have it be found and spread again and found again and now spread again, it’s just it signifies hope," says Robert.

Robert took the bottle out to sea aboard the Bantry Bay and sent the Maine message on its way 13 miles off the Gloucester coast. He says when he went to launch the bottle the sea was teeming with marine life and whale breached. It seemed like another sign of hope in a time when so many are struggling.

Credit: contributed
Fisherman Robert Porter took the message in a bottle out to sea to launch it 13 miles off the Gloucester coast.

"Now it's out in the middle of the ocean somewhere for all I know it could be in Antarctica," says Aiden.

But Joe hopes his message is heading to east. "The fishermen said that the currents would either take it back to Massachusetts or somewhere in Europe."

Joe's mother is convinced that he will continue sending messages via water transport to unsuspected strangers.

"It kind of keeps my mind off of things about what's happening in the world right now," explains Joe. Joe has video chatted with both Jeanne and Robert the fisherman, as he refers to him. They have even exchanged gifts.

Jeanne says she and Robert have become friends through the message in the bottle launch and she plans to stay in touch with Joe and Aiden as well.

What started as a simple adventure for two kids in Maine has brought the world a little closer together and the story is hopefully not over yet.

"We're all so beautifully connected and we can't wait to find out who will be next," says Jeanne.

Jeanne Blake wrote a blog about her experience. Enjoy it here.