With 11 world records and four Guinness Book records under her belt, Pat Gallant-Charette has no intention of slowing down. 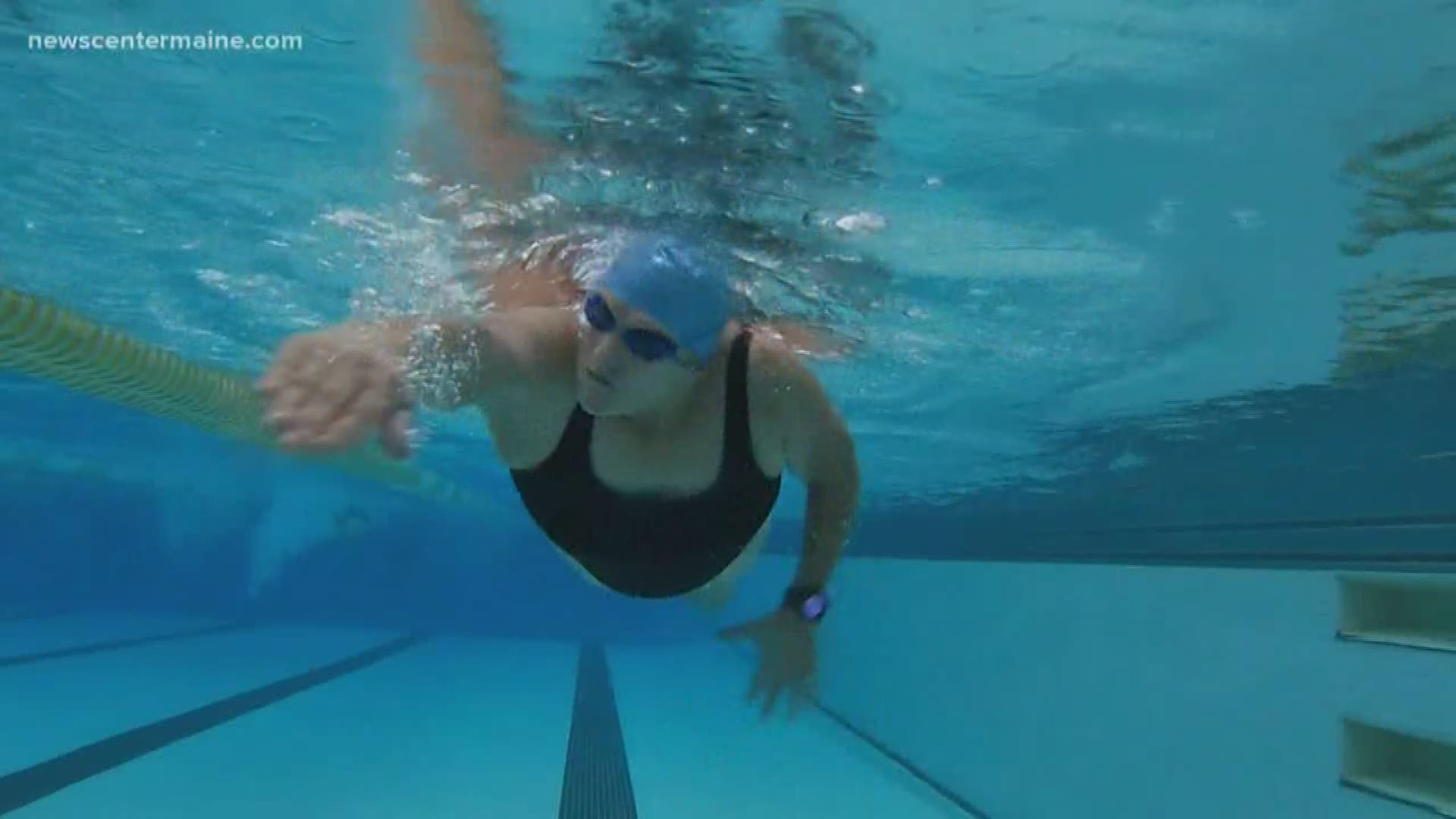 FREEPORT, Maine — Not only is age not slowing down marathon swimmer Pat Gallant-Charette, it seems to be doing the opposite.

"I am training, losing weight and I am getting faster," the almost 69-year-old said when she sat down for an interview at the Freeport YMCA where she swims five to six days a week for at least an hour.

In the past, Pat was never too worried about speed. But after returning home from her second attempt to swim the 16-mile wide Cooks Straight in New Zealand in February 2019, things changed. Conditions were great to start the swim which serves as her final leg of the Oceans Seven challenge.

With three miles to go to the finish, Pat could see the island she needed to reach when currents and winds picked up pushing her backward and making it impossible to swim.

"If I would’ve been a faster swimmer I would have made it to the finish line."

After 26 miles and more than 12 hours of swimming, it was over. She returned home to Maine with new determination to get faster and to lose weight because she says it was slowing her down. And it's working. She's been changing what she eats and how she works out, and her times are improving.

There is a four-year-long waiting list to swim Cooks Straight, but Pat told organizers she would be on a plane if anyone cancels. While she waits she trains and is in the preparation stage of planning other swims including one in Peru.

"I’m hoping, when I return to New Zealand, it will be successful, but if not, such is life. You just keep on going onto the next swim," she says with a grin.

Pat got her start marathon swimming with a Peaks to Portland swim when she was 48. Her late brother Robbie died suddenly when he was 34 years old. He had been a swimmer and had even won the Peaks to Portland swim in the 80s. Her son Tom, who was just 16, had the idea to swim in honor of his uncle first. He told his mother, and Pat responded by saying, "I wish I could do that."

His response stunned her. "You can if you try, Ma."

Pat was determined. The busy, full-time nurse and mother started training at the YMCA.  She was so nervous after many years of not swimming that she recalls asking the lifeguard to keep an eye on her while she was in the pool. A year later she qualified to swim the 2.4 miles from Peaks Island to Portland's East End Beach. On the morning of the swim, Pat says she was filled with self-doubt. She lined up with other swimmers.

"I remember looking at all these young slender athletes and I remember thinking, 'What the heck did you get yourself into?'" Pat swore that she would never swim again after she finished the race. But then she says something special happened. She was near Fort Gorges, the gulls were singing, lobster boats were busy in the bay and she felt at peace.

"I thought this is really nice. I think I’m gonna do this again."

The soon to be 68-year-old has been swimming strong ever since, setting 11 world records and four Guinness records as she realized she had the endurance to go the distance. In 2017 at 66, Pat became the oldest woman to swim the English Channel.

Her marathon swims have taken her all over the world and put her in some radical conditions. She suffered the effects of hypothermia when she swam in Lake Ontario in 2017. The same year, while swimming the Molokai Channel, a fish, most likely a dolphin, bumped into her leg while she was swimming in the middle of the night. "That was a little hair-raising."

Pat has swum more than 24 hours and sometimes even gets sick during swims, vomiting while she goes. But perhaps the most impressive thing she has overcome while marathon swimming is that she is afraid to go into deep water.

When Pat was 13, she and two of her brothers went clam digging off of Pine Point. Before the kids left the house, Pat recalls her mom saying, "Be careful of the incoming tide."

But the three kids lost track of time and were soon surrounded by water. They had to swim to shore. Pat says that was no big deal, since they were all strong swimmers. But while they were swimming her brother screamed, "Shark!"

"I knew by the tone of his voice that he was not kidding."

Out of the corner of her eye, she saw something go under the water. In her mind, she thought it was the shark that her brother had screamed about. She panicked and thought she was going to drown when all of a sudden, about 10 feet in front of her, a seal popped its head out of the water.

It's been almost six decades but Pat only swims in waist-deep water unless it is the day of a marathon swim. When she trains she stays close to shore and swims parallel to the beach.

"I cannot go farther because I get this incredible anxiety, so the only time I swim in deep water is the day of the event."

So how can she swim sometimes more than 24 hours in deep water for her marathon swims? She says it's simple.

"I put everything on the back burner ... I go into the zone."

And even after all she's accomplished, Pat says she still has self-doubt and anxiety when she attempts a big swim.

"I’ll be standing there and say, 'Pat, that’s 32 miles ahead of you,' and then I just calm myself down and say, 'Yes, but you’ve trained. You can do it. Now get your butt out there and do it.'"

Pat says she has no intention of retiring.

"I’m just gonna push this, and I’m enjoying it."

RELATED: UNE professor working to restore the American chestnut tree one seed at a time

RELATED: Ring, lost and found on a Maine beach, returns to its rightful owner after 49 years