"You're taking everything up to a bigger scale": Life for a Mainer fishing in the Bering Sea

Taylor Strout spends months aboard the FV Northern Defender, allowing him months at home with his family.

UNALASKA, Alaska — The fishing industry is woven into the fabric of our  state. Safe to say that work is rugged, unpredictable, and looks different during different seasons. And most fishermen wouldn’t have it any other way.

Taylor Strout is the son of a fisherman; fishing simply runs in his blood. The job he has takes him  -- what feels like  -- a million miles away.  He is on a boat that fishes out of Dutch Harbor, Alaska  – about halfway out on the chain of Aleutian Islands. I asked him if he'd ever calculated the actual distance from Portland to Dutch Harbor. "I have not, I just know that it’s like four airports away. It takes a good 24 hours to get out here."

Taylor is a mate aboard the Fishing Vessel Northern Defender which, when we talked, was tied up at the dock in Dutch Harbor. The Aleutian Islands split the Pacific Ocean and the Bering Sea, and they fish the Bering Sea. As the crow flies, he is more than 4000 miles away from home.

"It’s kind of a different level of fishing out here. And it was something that I’ve always wanted to do and try back when I first got into it. I had the opportunity to do it, and to try it, and I didn’t just try it, I ended up kind of falling in love with it. And continue to do it since. I love the rotation of it. You know, you go to work, you work hard, you put it in there, and then when it’s time to go home and focus on your family you get to come home and just be Dad and take care of the family that way too."

There are two seasons to this fishing rotation – generally mid January through April, and then June through October. For those months, six men crew and pilot this boat;  a 150-foot long vessel. Living quarters, a galley and enough equipment and power to fish and haul 800,000 pounds of fish back to the processing plant. "You’re basically towing a football field behind you. You’re taking everything up to a bigger scale when you’re on some of these boats. Bigger weather, there’s bigger seas, sometimes we fish in 15 foot waves to 25 foot waves."

Covid has complicated life in Dutch Harbor. Three of the five fish processing plants had outbreaks and shut down. If the fish cannot be processed, the Northern Defender cannot fish -  and the crew quarantines. They are impatient to get back to sea and do the job they came here to do.

"There’s quite a bit of risk. You know, when you’re playing around in seas like this, and you’re pulling 200 ton bags on board, you’re putting a lot of pressure and tension on the equipment – at that point you’re really relying on the upkeep of the equipment and your crew. We are up here for half a year and we do become a family."

The weather at the dock does compares to winter in Maine – out at sea? Not so much. "The hardest part is it’s been getting really cold. And it hasn’t been like that in year’s past. So the freezing spray starts to build up on ice, that’s some stability issues, and it’s just really dangerous on deck, you’re covering everything in ice, and trying to haul 200 tons with your equipment and it just becomes that much more difficult. Especially when the winds howling like that and you’re getting the ice buildup usually there’s some pretty good seas that are going along with that as well.

It is that risk that Taylor’s wife, Nikki, has had to face head on. "I never let myself worry before until this last year."

In the last year, a boat went down in Dutch Harbor, and recently, the Emmy Rose carrying four Maine fishermen sank off the coast of Massachusetts.

"I have had far more anxiety this time than I have ever had with him being out there and I know the men on his crew and I think they are incredibly talented and safe and hardworking fishermen but from what we’ve seen in the last year or so, there are things that are just out of your control," says Nikki. Nikki and Taylor have three little boys, so when Taylor is gone, Nikki  has her hands full.

"He is definitely not the kind of person who can sit in an office. He loves his job, and so when you find something that you love, and he’s so proud of it, I could never ask him to not do it. It’s tough, and the time away is really tough, but he’s really happy doing what he’s doing, and I’m proud of him too. Being a fisherman is not an easy job."

Two of their little boys have a genetic condition that is diminishing their eyesight. She talks openly about the support that surrounds her; her family, Taylor’s family, the extended fishing family. "There’s no way we could live this way without all these people helping us. No way."

I asked Taylor why he chooses this work.  "I ask myself that every time I fly out here. It’s something – not at this level – but it’s something that I grew up doing. It’s something that my father taught me, I grew up with my cousin doing it, and it’s part of our community in Maine, right? It’s something that’s just inside me. And it’s where I’m the most comfortable too." This work is financially rewarding, and Taylor does his best to be in close communication with his family, often face-timing with his sons at bedtime. "With all the risk and danger and being away from the family it is, it’s worth it. And it enables me to kind of live a different lifestyle."

This time of year they are fishing for pollack and cod, and their haul is processed for products that go all over the world. Women do this type of work as well – at one point there was a boat up there with an all-female crew. There are other Mainers who fish in Alaska but most of the fishermen come from the North Pacific.

Together, Taylor and Nikki has also launched Rugged Seas, profiled previously on 207 in this video. 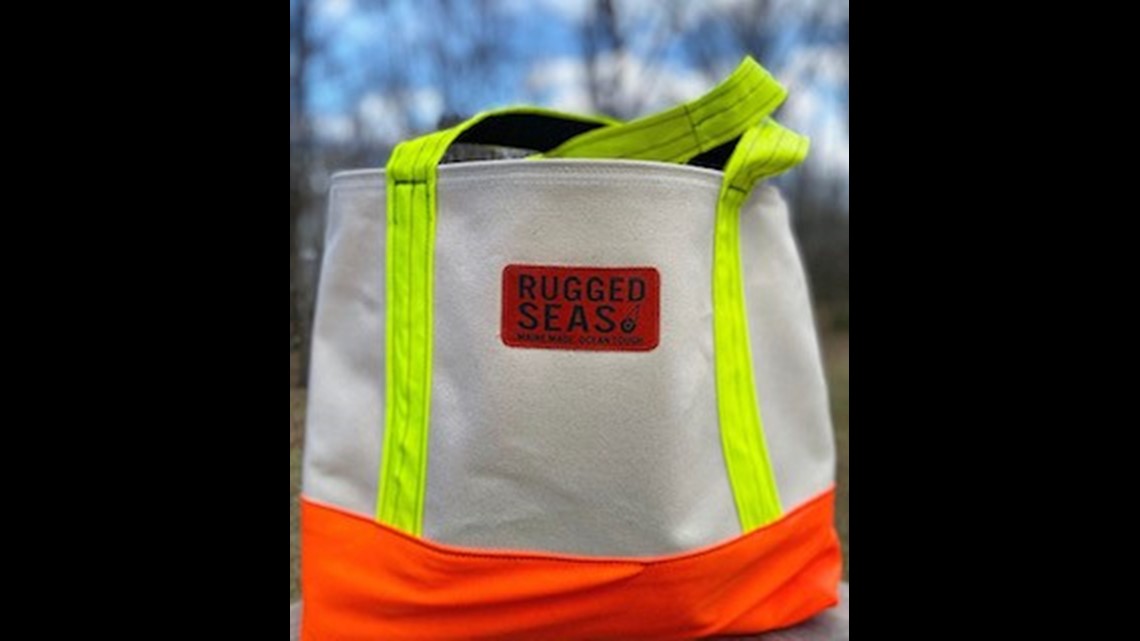 Rugged Seas honors an industry with products that speak to the fishing lifestyle
Nikki and Taylor Strout use what fishermen discard in their durable line of bags. CAPE ELIZABETH, Maine - Talk to Taylor Strout about the Maine fishing industry, and you get a passionate answer. "It's made me the man I am today. And it's given me everything that I have around me.