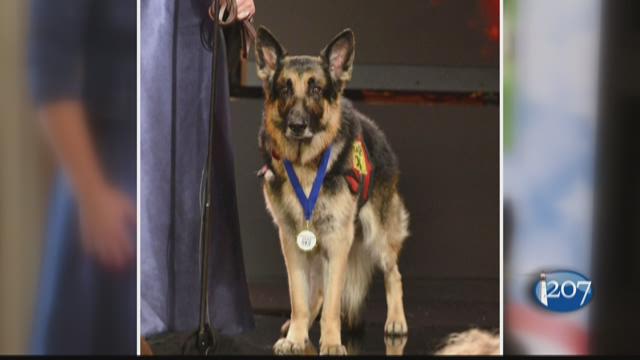 BRUNSWICK, Maine (NEWS CENTER) -- Thirty five volunteers and eighteen canines make up the team of Maine Search and Rescue Dogs (MESARD) that all comply with the rules of the Maine Association for Search and Rescue (MASAR) standards. One of those dogs has given both groups a reason to be proud of their work.

Elizabeth Fossett spends around 30 hours a month training her German Shepard, Kobuk, on search and rescue. The pair have been volunteering with MESARD since 2012 and in 2014 he was the dog that located 77-year-old Ruth Brennan. Brennan, who had diabetes and dementia, was missing for three days until Kobuk's nose tracked 2/10 of a mile to find her.

"Kobuk came up over the hill and gave me his trained bark alert that he had found her and located her," said Fossett. "It was a thrill and it changed her life."

For their hard work, Kobuk received an award from the American Humane Association in September. Fossett and her 7-year-old dog flew to Los Angeles to receive the Search and Rescue Hero Dog award.

"Pinch me because how did we go from running around the woods of Maine to walking around the red carpet of Hollywood," asked Fossett with a smile.

MESARD is made up of all volunteers and relies entirely on donations. Click here to make a contribution.