Chris Barr relearned how to talk, walk, run, and bike after a traumatic brain injury sustained while mountain biking in Boise, Idaho. He may never know what happened 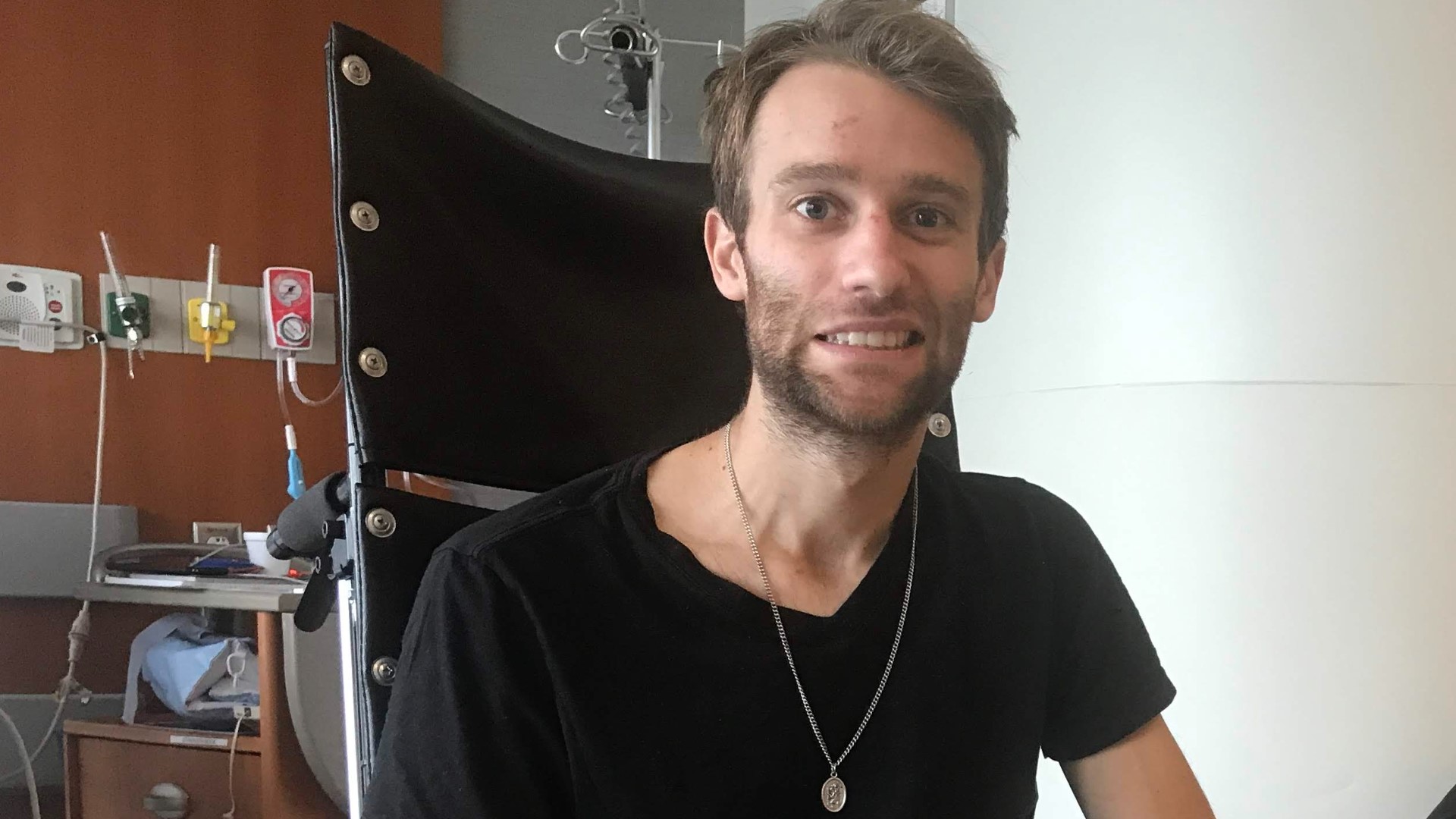 PORTLAND, Maine — Sometimes life takes us down paths we never anticipated traveling on—ones we never wanted to go down in the first place. That’s true for a 29-year-old Chris Barr of Portland whose life changed in an instant on September 27 in 2019.

A work conference at the engineering firm where Chris had worked for less than a year sent him to Boise, Idaho. Another new employee came along and together the men decided to extend their stay and explore some of the world-class mountain bike trails of Boise.

Chris had nothing to worry about. He was an experienced athlete, who raced for the University of New Hampshire during his college days but had continued to stay in tip-top shape. He road every night and competed almost every weekend. Riding bikes was a fabric of his life and although he preferred to road cycle, he was just as comfortable on mountain terrain and fatter tires.

The two coworkers, who didn't know each other particularly well, grabbed a bite to eat and picked up their rental bikes to hit the trail.

That is the last memory Chris Barr has of the day that changed his life.

Two and half weeks later he woke up from a coma. At his side at St. Alphonsus Regional Medical Center in Boise, Idaho, was his wife Alex Morrow, his mother and father, and his brother.

"I didn't know where I was. I didn't know dates or times. It's so foggy," Chris explained as he searched shady memories.

The waking up didn't come all at once but slowly. At first, his eyes were open but it didn't seem as though Chris was there. He couldn't speak, the trauma to the left side of his brain left the right side of his body paralyzed.

Chris was suffering from diffuse axonal injury, a form of traumatic brain injury that happens when the brain rapidly shifts inside the skull and the long connecting fibers in the brain called axons are torn. According to Chris' doctors, only 10 percent of people with this brain injury regain conscientiousness.

After nearly a month in Boise, Chris was transferred to Spaulding Rehabilitation Hospital in Boston where he really started to learn that it doesn't really matter the road life leads us down, it's how we navigate our way that makes the difference.

He started working with physical, occupational, and speech therapists to regain his strength, hopefully walk again, and turn his whispers into a full voice. After almost a month at Spaulding, Chris's hard work was paying off—he was walking, even running, and his voice was stronger as words came more clearly to him. He was ready to return home.

Months after his accident, Chris invited over the coworker that he was mountain biking with to fill in the holes in his memory. His coworker said Chris was on the trail just ahead of him. The two had just descended the steepest part of the trail, his coworker rounded a corner and there was Chris, lying face down on the earth unconscious, his face covered in blood. It looked like he had gone over his handlebars and his bike was off to the side, his helmet severely damaged on the left side.

The coworker got out his phone to dial 911 but no reception so he dug into Chris's pocket, found his phone, and used it to call for help. It took rescue crews on ATVs an hour to reach the bikers. They carried Chris to a waiting helicopter.

Seven months after his accident, Chris got back on a bike, something doctors had said he would never do again. He rides a little slower these days but that isn't necessarily a bad thing according to his wife Alex. She can now keep up with him and they enjoy riding together every week like they once did when they were dating eleven years ago. Chris's voice has changed, words are still sometimes jumbled and he fights to find the right ones but he is doing well.

"Chris is still himself if not on steroids," Alex explained. "Lucky for me and everyone who loves Chris, Chris is Chris but even more so Chris. I always tell everyone that Chris is the most kind and caring and loving person I know and then he just is a genuine soul that loves and cares about people." Alex said that hasn't changed but only been magnified.

For Chris and Alex, this experience has shown them so much; a caring community of family and friends, it's exposed the hard things others have been through but rarely share, and for Chris, it has helped him find himself.

Feeling so indebted to the healthcare professionals that helped him recover, Chris is taking a sharp career path. He's enrolled at the University of New England and hopes to become a nurse.

"Your life may be different but ... something that I've come to terms with was this is the new me."

More now of our story about Chris Barr from Maine who suffered a traumatic brain injury while on a work trip in Idaho.

JUST WAS EVERY BRAIN INJURY IS DIFFERENT SO TOO IS THE RECOVERY.

CHRIS BARR WAS DETERMINED TO REGAIN HIS PHYSICAL AND MENTAL STRENGTH.

ALEX he couldn't quite speak his physical therapist would give him exercises and I remember his mom and I would come to the hospital to see him in the morning and he would like whisper: I've been up since 3 a.m. in the morning practicing my PT exercises and he doesn't even fully remember this 15 45

HE WORKED HARD AND AFTER A MONTH AT SPAULDING REHABILITATION IN BOSTON, CHRIS CAME HOME.

ALEX 1550 that’s just who Chris is. Chris's has always been really committed and extraordinary really driven and when something is hard he just sees it as an opportunity to work harder and that's something that I admire and I'm grateful for 1605

ALEX 621 Glimmers of Hope come in small moments And despair comes in waves 6:25

ITS BEEN A LONG ROAD BUT CHRIS IS NAVIGATING IT WELL.

ALEX 1158  I remember someone had said when Chris was in the ICU he might wake up and he might be completely different person and that happens all the time with brain injury 12010 and I was Furious because I was like you don't know my Chris don't tell me he's going to be different don't t ell me that this person who's kind of loving and patient is going to be all of these things 12:23

SEVEN MONTHS AFTER HIS ACCIDENT CHRIS GOT BACK IN THE SADDLE.

HE RIDES A LITTLE SLOWER BUT THAT ISN'T NECESSARILY A BAD THING, ACCORDING TO HIS WIFE.

THERE HAVE BEEN OTHER MAJOR MILESTONES.

IN 2020 CHRIS ALSO RAN HIS FIRST HALF MARATHON

EVEN MORE IMPORTANTLY THAN GAINING HIS PHYSICAL STRENGTH, ALEX SAYS CHRIS DIDN’T LOSE WHO HE WAS AT HIS CORE.

ALEX Chris is still himself if not on steroids

ALEX 1120 lucky for me and everyone who loves Chris, Chris is Chris but like even more so Chris. I always tell everyone that Chris is the most kind and caring and loving person I know and then he just is a genuine soul that loves and cares about people and does not wish ill will on anyone 11:45 he just deeply is a kind person1158

THE LASTING CHANGES OF HIS TRAUMATIC BRAIN INJURY ARE ONES THE COUPLE IS TRYING TO WELCOME.

ALEX 12:30 in the beautiful way he cries a bit more which I really like he's just a little more emotional 12:39

CHRIS 1225 speech it's been a long long journey

HIS RECOVERY HAS BEEN LONG AND THERE HAVE BEEN PLENTY OF BUMPS ALONG THEY WAY.

BUT CHRIS SAYS HIS INJURY HAS HELPED HIM FIND HIMSELF. - NEED STRONGER LINE

CHRIS SAYS BY LOSING EVERYTHING HE HAS FOUND HIMSELF.

THAT IS WHY CHRIS HAS MADE A CAREER SHIFT AND IS WORKING TO BECOME A NURSE HIMSELF. SOMETHING ALEX IS EXCITED ABOUT TOO.