Maine couple lives off the land, teaches others through their primitive-skills school

Colby Smith and Hannah Rhea eat roadkill, bathe outdoors year-round and make their own clothes. Their school is 'Way of the Earth' in Blue Hill. 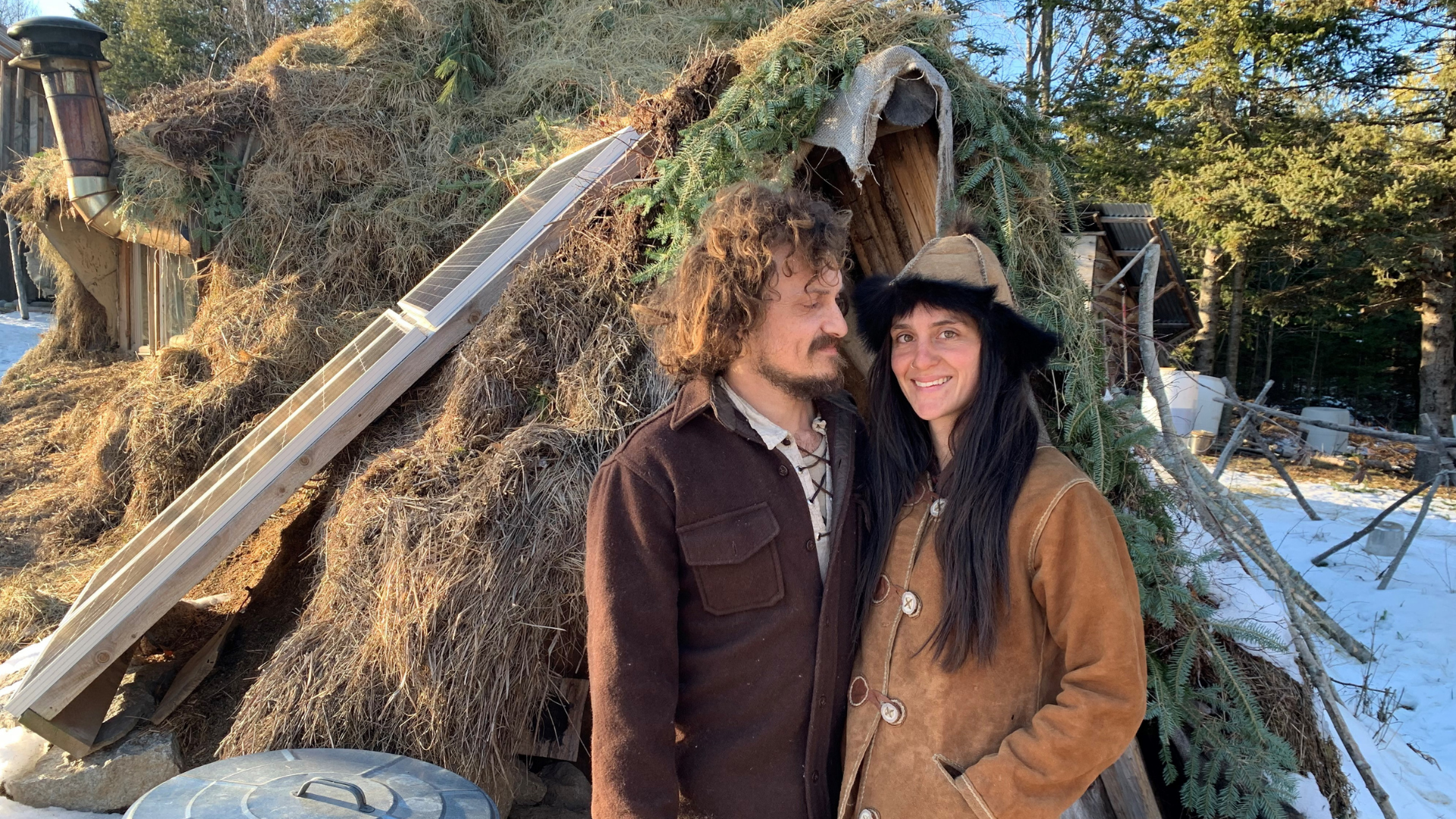 BLUE HILL, Maine — Colby Smith and Hannah Rhea are living life on their own terms. For the last three years, the Maine couple has been living on their 50-acre spread in Blue Hill, less than a mile from the ocean where they fish for mackerel, collect seaweed and harvest salt.

They forage wild rice, make flour from acorns, tea from pine needles, and salvage roadkill for supper. They bathe outdoors all-year-round, haul their own water, and heat their earth lodge dwelling with a homemade rocket stove, which they've engineered to keep them toasty warm all while using very little wood.

Their property is scattered with goats, chickens, ducks, and the eleven angora rabbits that Hannah shears and uses the fibers to make clothing.

"Angora fur is six times warmer than sheep's wool," she explains as she shows me the "bunny condo" where the rabbits reside in winter, all while she strokes a caramel-colored one burrowed in her arms.

"We like to live outside," Colby says as we chat behind the outdoor kitchen, made of cob walls and a partially finished hide roof that shelters another rocket stove used for cooking. Hannah uncovers a wooden box where salted mackerel, pork fat, and moose and bear roadkill will be for several months before it is leached, cooked, and eventually devoured.

"Salted meat is so good. After six months it changes in texture and flavor and when you cook it falls apart like pulled pork," Hannah explains. The meat, like most things on their land, takes an investment of time and forethought but the couple doesn't mind. Their work is never down because their projects are vital to their survival and the continued success of their school.

"The primitive term can mean first skill, prime skills. It's kind of the most simple skills that you need... But also primitive skills can be super complex," the couple explains.

Colby's interest in primitive or earth skills began when he was 13 and went on an Outward Bound program in Maine. "It was fun," Colby remembers but even as a young teen he wondered how he could survive in nature without his heavy pack filled with gear. He thought, " I know there is food out here but I am not seeing anything." He began a life-long hunt for answers.

As a 16-year-old, Hannah's deeper connection with nature grew as she watched the weeds sprouting in her garden.

"I got super interested in what they were and I went to the library and got a book on the weeds of the Northeast. I was just so surprised that all these plants were edible and medicinal and useful in some way," Hannah remembers.

She soon forgot about the thyme and lavender she had planted and became fascinated by the power of things most people pluck out of their gardens. Weeds are still put to good use by Hannah and Colby. They grow them, bring in weed seed from other farmers, and say they are a staple of their diet.

Hannah and Colby met at Unity College and worked at other primitive skills schools before creating their own called 'Way of the Earth.' They teach students how to make clothing from animal hide, tools from bones, friction fires, and efficient shelters with no equipment.

Their own home, an earth lodge with one large window constructed of more than 400 hand-cut and peeled spruce polls with four-foot thick walls made of organic material, took them a year to build. From the outside, it doesn't look like much -- a clunky hobbit home with tufts of mounded grass and hay. But inside it's a beautiful, organized, well-engineered dwelling with stone floors, a bed made of cattail mat and sheepskin, comfortable benches, and bookshelves.

“We acknowledge that we are white privileged kids who were able to buy land and move here and not have to work for a few years while we got set up," says Hannah. "We do really focus on letting people come here who maybe can't afford the programs. We really want to be available to anyone who wants to learn so we're willing to work with people.”

This year, the couple is offering a five-month immersion program where people will come live on their land, starting out in tents and eventually learning how to build a shelter to move into as they rely more on the land.

"These skills are free, they're our birthright, and the more we can share them with people the more self-reliant they can become on their own," says Hannah.

"In today's world, we've kind of displaced community with technology," says Colby, who is not against technology but explains it comes at a price --  it isn't free.

The couple owns several cars, a tractor, and a cell phone. They have an Instagram account and enjoy watching videos on YouTube about things they're interested in. A solar panel that Colby installed supplies power to charge their tools, their phone, and give them light.

"The question I ask myself is, 'is this helping me further our connection to nature and how can we use it and what else is it sacrificing?'” explains Hannah.

"The main reason we live like this because I find it more fun than living in a big house ... and the simplicity adds to the ease of living," says Colby. The couple tries to live without debt and says everything they have built cost about the price of a used car.

The thing most might be surprised about their lifestyle, Hannah says, is how comfortable they are.

"I think people associate living more of an earth-based life as ... they're sacrificing their comfort and modern conveniences but I think as you push yourself to live more earth connected your idea of what comfort is really shifts and changes."

A lifestyle that looks foreign to most of us, Colby Smith and Hannah Rhea are living with ease. And the couple is teaching others, if they are willing, to do the same.