Their health reflects on the health of the environment. 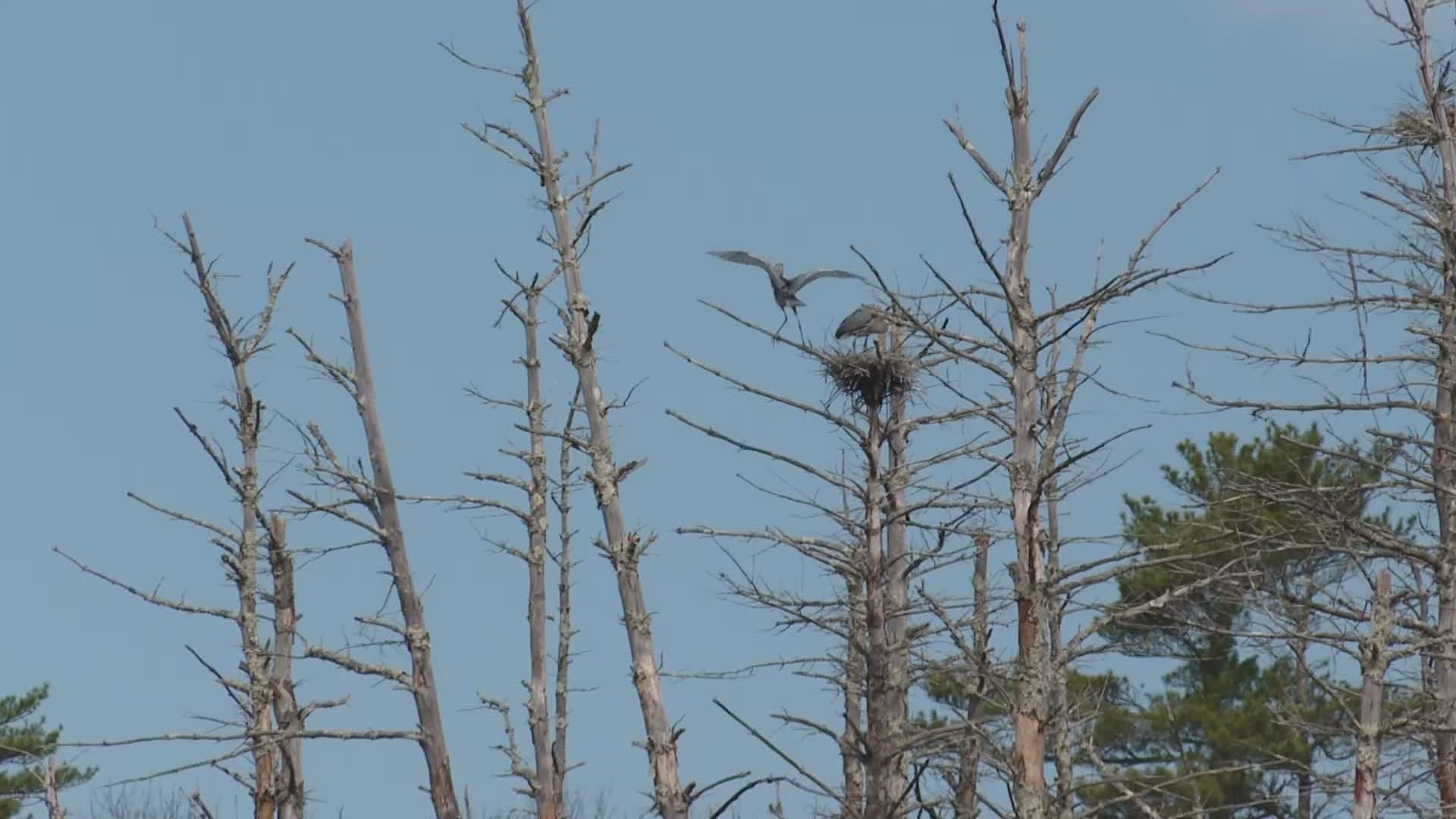 KENNEBUNK, Maine — They are equal parts majestic, graceful -- and prehistoric. With a wing span of nearly five or six feet, Great Blue Herons are some of the biggest birds that take to the wing in the Maine skies.

It takes a small army of volunteers each year to keep an eye on this particular bird population – and with good reason. Tracking how the Great Blue Heron population is doing in our state—and where they are nesting—tells us a lot about their environment and ours. Over the last few decades, the colonies of Great Blue Herons nesting along Maine’s coastline has declined. What is impacting these birds, and are they simply moving elsewhere in the state? It is the work of the Heron Observation Network to try to answer some of those questions.

The sweeping view from above reveals a stand of trees, tucked amidst the gentle curl of a stream – and at first glance, not much else. That is, until you begin to look a bit more closely. Built meticulously and deliberately into these tall pines are the nests of Great Blue Herons, high above the landscape. For decades, it was believed that these immense birds nested mostly offshore, on Maine’s coastal islands.

"But that’s kind of retreated a bit over the last 30 years," says Wildlife Biologist Danielle D'Auria. "We’ve actually seen quite a decline in the coastal nesting pairs out there, but they are throughout the state. There’s more concentrated in central Maine, this part, southern Maine, not so much Downeast, and not so much in northern Maine."

A big part of D’Auria’s work with Maine’s Department of Inland Fisheries and Wildlife is to keep tabs on these birds. She studies wetland birds, like these Herons, as well as Loons, Terns, and what she calls "secretive marsh birds."

She oversees the Heron Observation Network of Maine. 50 to 75 volunteers across the state monitor about 100 colonies. This is volunteer Brian McBride’s third year. He is an employee with the KKW Water District in Kennebunk and this colony is on Water District land, so he gets to check on it nearly every day.

"For us it was counting the nests, then monitoring them to see how active they are, whether each nest has birds in it, whether it's pairs, if they seem to be sitting on nests on eggs. And then watching later as they develop. You know, fledglings appear, and then the nests vacate.  And our nests vacate almost entirely by August," says McBride. He can use a spotting scope from the Water District's building to monitor this colony frequently.

"Right now, probably our largest colony is somewhere around 80 pairs. But, historically, we’ve had sites off the coast that have hosted 250 to 300 pairs. And in other places, within their range, they do nest in bigger colonies. I’m not sure why ours are so much smaller here? Our average is maybe 8 to 12 nests," says D'Auria.

The site we visited is one of the first active colonies each season; the herons begin showing up here in early March.

"Throughout Maine, our colonies, the birds starts nesting at kind of different time depending on where you are in the state," says D'Auria. "And even certain colonies seem to be prime sites, so the birds get there first and try to get the prime real estate. And then some other colonies start later on in the season."

It takes a few weeks to rebuild their nests. They lay anywhere from two to sevem eggs, and the birds then hunker down in the nest during this incubation time. Observers might begin to see nestlings peer over the edge of the nest some time in mid-May. Volunteers who watch this process record whether or not a colony is active, the number of nests that are there and, if they can, determine how many nestlings actually progress to "fledglings" and leave the nest.

"Once they hatch, they’re actually in their nests for anywhere between 50 and 80 days," D'Auria says of the timeline for the nestlings. "Depending on the birds, and how abundant food is, and how quickly they’re growing. Because they have to get to the size of an adult, pretty much, before they fledge. Before they can fly. They spend a lot of time in that nest!"

She believes engaging the public to help monitor these birds allows us to appreciate and understand how the population of Great Blue Herons fits in to the landscape of Maine.

"Understanding how their population is doing and if it’s not doing well – if it really is declining statewide are there certain measures we should be taking to help conserve them a little better."

Part of D'Auria’s work also involves tracking the migration of Maine’s Great Blue Herons. Currently two birds have transmitters, and some traveled as far as Cuba and Haiti for their winter. She hopes this year to get a transmitter on an island nesting Heron to see how its track compares to the inland birds.

Heron Observation Network page on the Citizen Science Portal – includes a map of all known colonies in the state and their activity, and a link to inquire or sign up to adopt a colony.

D'Auria says she is taking more volunteers, but it depends on where you are located and if there is an available colony nearby. If you are interested in learning more, the best way to connect with her is to inquire through the Citizen Science Portal and she can let you know if there is anything available in your area.