This neighborly cormorant takes to the bow of one woman's kayak 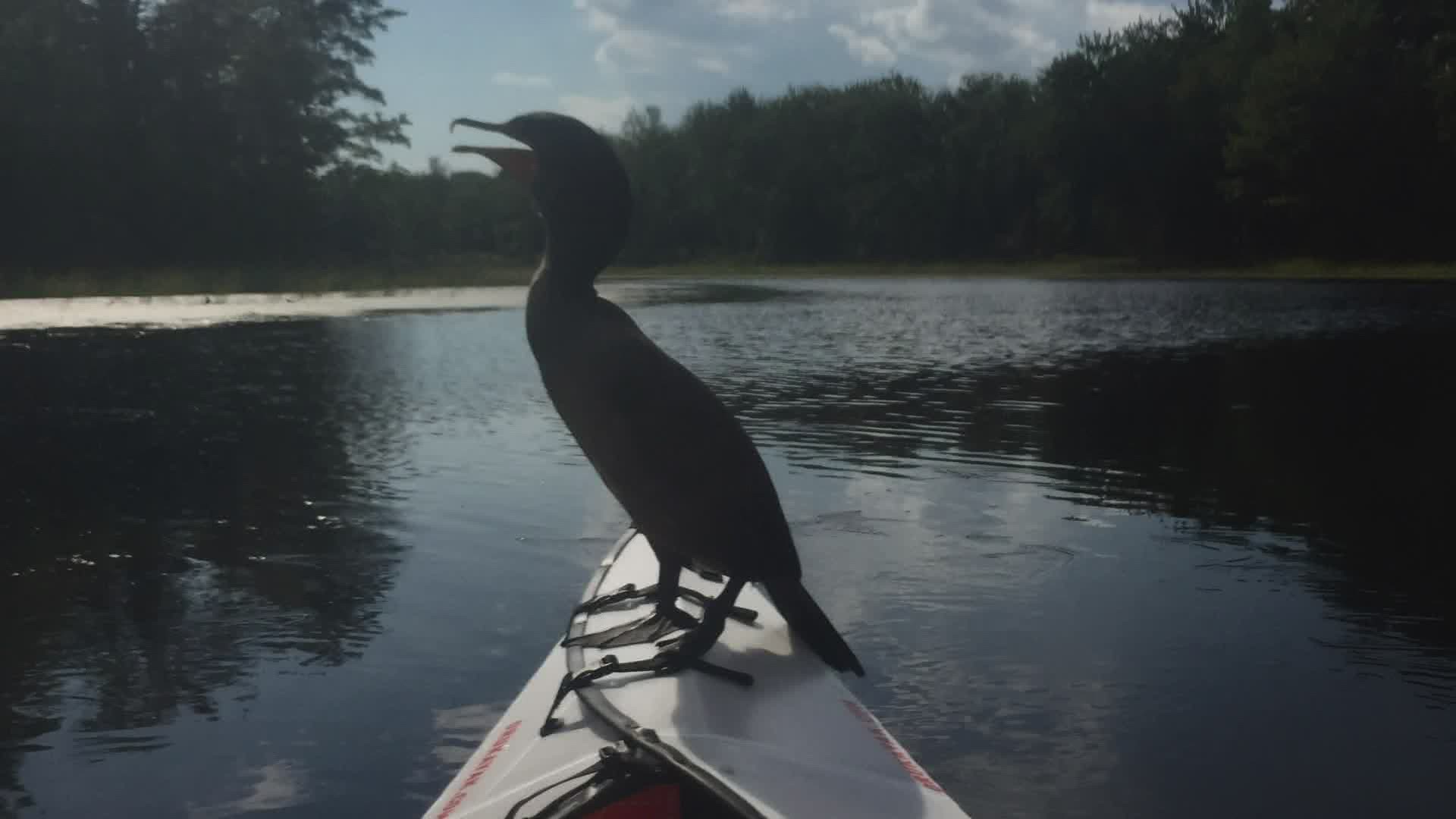 DURHAM, Maine — Nature provides us with much that is predictable – sun rises, seasons changing, the beautiful ‘V’ formations of geese flying south. Nature can also be unpredictable, as we learn from this story of the neighborly cormorant.

Sallie Hunter bought herself a pretty cool kayak this year – it was her way of coping with Covid – and on many summer evenings, you’d  find her putting her kayak together and sliding it in to the quiet of a small pond in Durham.

In the stillness, you can hear the birds, the frogs, the rhythm of her paddle. A few weeks ago, that stillness was broken in the most unexpected of ways.

"I was paddling and this cormorant came up to the boat, you know, I thought I was gonna hit him because he was right by the bow and I thought he’ll move, he’ll fly away and instead he swam right along the boat, hopped in, and hopped on the bow," recalls Sallie.  "And you know, as if to say, 'Hey, hows it going?' He just sort of fell in and then scrambled up on to the bow of the boat and started drying himself. And I was stunned. So surprised. He was so beautiful, you know?"

After taking the experience in for a few moments, Sallie noticed that this beautiful bird had a fish hook in his foot. A pretty BIG fishhook. And it was clearly infected. "So then I was thinking, how do I help this bird?"

Clouds were gathering, there was a thunderstorm coming, and Sallie started to paddle back to shore. When she got back to shore, there was only one car in the parking lot. "I yelled up and this woman said, do you need help? And I said, I kinda do."

Enter Amanda Whispell, who grew just down the road, was home visiting and happened to be in the parking lot. "I’m actually an entomologist, so I study insects for a living...My best friend actually studies cormorants."

What are the chances of that?

"I kind of had the head sort of gently here so that it couldn’t move around too much, but I wasn’t putting any pressure, and held the body against myself and we looked and it was going right through its leg," explained Amanda. "Not through webbing, not even through part of a toe – right through the leg."

It was a big hook  – they cut the barb, and removed it from the cormorants leg, and in the pouring rain, returned him to the pond.  "It was really lucky, he was really lucky."

Sallie recalls, "I hope, in a perfect world, you’ll be sending me back a text that says ‘Hey we were able to catch him and take the hook out' – and that’s exactly what happened. And I’m thinking okay that’s the end of the story and what a great story."

But it wasn’t the end of the story, not even close.

"A couple of days later I came back to kayak again – and he was sitting on that rock and I sorta went up to the rock, and he hopped on .. he’s like ‘okay, you know, let’s go.’ And, he was on the boat for about two hours. He just sat there and preened," says Sallie.  "I’ve seen him now four times he’s gotten on the boat."

And - on the day we came to meet this neighborly cormorant, he didn’t show up.

"They do migrate. It could be… that he’s gone. Maybe it was his farewell tour. We got to see it. We’ll all have tee shirts made." Sallie – the consummate teacher – is thinking of ways to make her experience a teachable moment. "There’s a story here. Right now there’s a setting and a character I don’t know how much plot but  … the plot’s developing. The plot’s developing."

We learned a lot about cormorants on this shoot.  Apparently we cannot discern the gender (but cormorants can) so we don’t know if he’s a he – or a she. We do know he is a juvenile, and that they do show up in freshwater (I always associated them with salt water).  Sallie has promised to let us know if he shows up again, or perhaps – if that magic moment doesn’t happen until next Spring - we’ll let you know that as well.