A group of women on MDI have been swimming weekly since Nov. 2020. During the month of March, the women are swimming every day for mental health awareness. 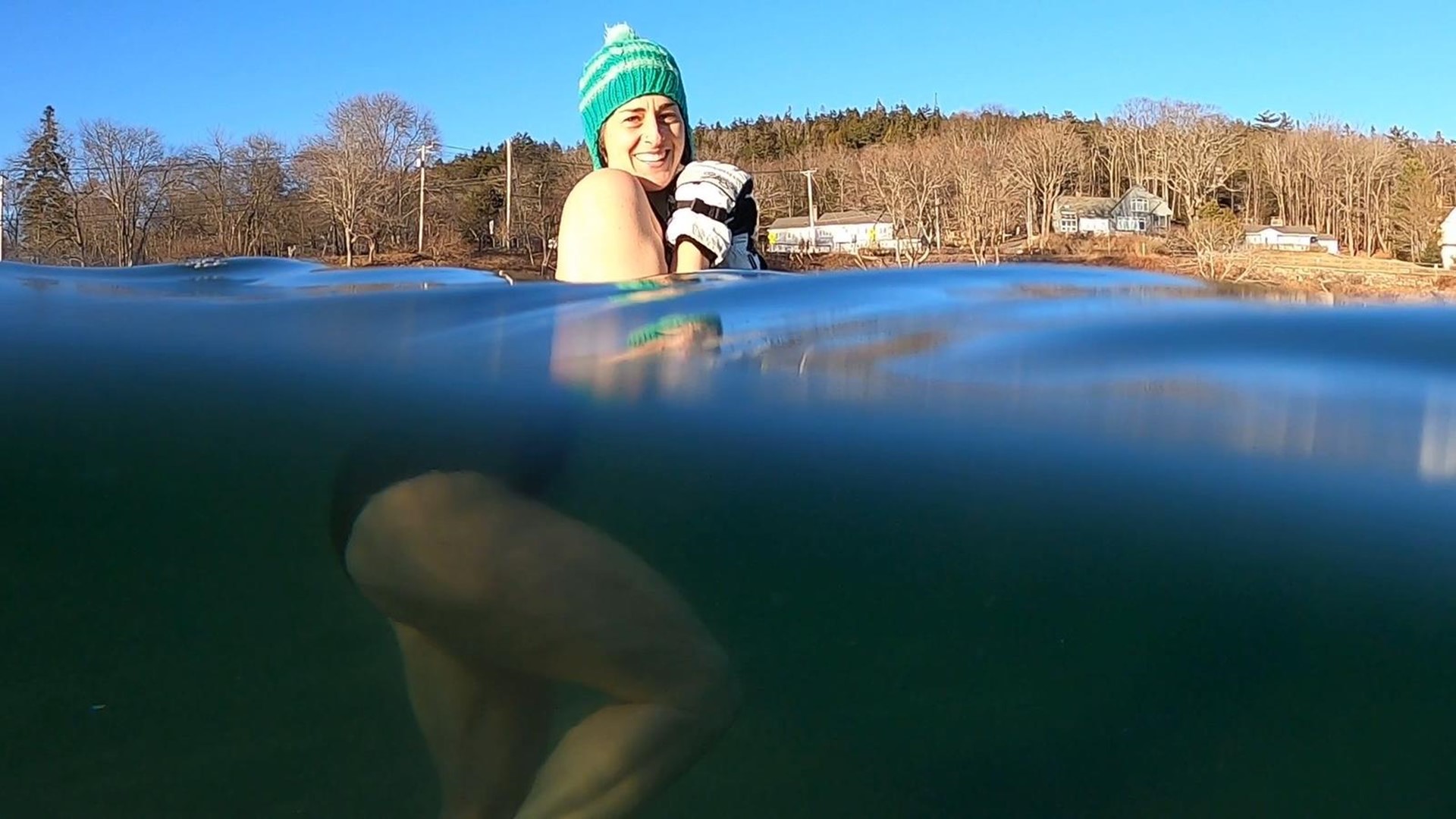 MOUNT DESERT, Maine — There are plenty of people who won’t even dip their toes in the ocean during the summer months, let alone take a swim in winter.

But a group of mostly women from Mount Desert Island has been taking polar plunges, actually, they're not quick dips but slow immersion swims, every week since November of 2020 as a way to acclimatize to the cold ocean water and be outside and together during the pandemic.

Gail Gladstone, 51, of Somerville, and Allison Richardson, 38, of Lamoine have been swimming in the ocean together since last spring.

"I love to swim in the ocean," Gladstone explained. "The ocean is the mother. It's the source. You got to get back to it."

Gladstone and Richardson decided the water was too cold to swim alone, having each other to rally one another was helpful so they thought even more women would make the cold practice more doable.

"We could get ourselves in with each other but it's something about a mass of people moving you into this ocean this cold ocean that helped a lot," Gladstone said.

They started by inviting just a few friends like Mariah Reading and Puranjot Kaur, they invited their friends and the group has grown from four to now 30. Every week since November 2020, the women meet at the ocean or nearby lake and take a dip.

"You can really acclimatize to cold water swimming by swimming down the season," Kaur, who shares the group's longest swim of 15 minutes with Reading, said. Fifteen minutes doesn't sound like a long time but when the water is 33 degrees, it is a biting experience that leaves hands, fingers, and toes completely numb. On average, the women stay in the water for around 10 minutes.

And they come prepared in warm clothes with towels and tea ready for when they stumble out of the cold sea. But what could motivate women to do put their bodies through a seemingly uncomfortable experience? It's the mental, and physical benefits along with the energy they say they derive from the swims.

"The pandemic has been such an isolating experience for so many of us," says Reading who says she was struggling with depression and PTSD when she first started swimming with the women. "To get to come out in the open air into the ocean and kind of share really personal stories with people, this is the human interaction that we were craving, has been really rewarding."

Like many women in the group, Reading said her mental health has improved since taking the weekly dips.

1 / 10
CTWH
Cold Water Swimmers: A group of mostly women from Mount Desert Island has been dunking in the ocean or lakes every week since November of 2020. They say they're seeing physical and mental benefits to communal cold water swims.

"No matter what I show up with at the edge of the water at any given day  - I could be in a terrible mood from work or life or whatever ... you get in the water you have no choice but to be in the present moment," Kaur said.

The cold water is so intense, several of the women explain that it "forces" them to be present, something that after a long, unpredictable year of a global pandemic, being present has been a hard thing for many of us to practice.

As they swam week after week, month after month, they noticed that the frigid water became a safe space and often their conversations turned to their mental health and how they were all experiencing and working through the issues of life.

"There's the stigma of talking about mental illness. It's a secret. You can’t talk about it," Gladstone said.

"A lot of people were kind of sharing their stories while we were in the ocean about processing our own mental health and having the ocean be a part of that," Reading said.

That's why the group decided to for the month of March, at least one member would swim in the ocean every day as a way to raise awareness about mental health. They started a GoFundMe and decided to raise money as well which will all benefit the Acadia Family Center.

They even aptly named themselves "Cold Tits, Warm Hearts." They say anyone is invited to join. The group has no plans to slow down. They plan to continue their weekly swims after March until summer and then return again in the fall.