Danish artist Thomas Dambo created 5 troll sculptures made of recycled materials, each takes 500 hours to build. Dambo has 80 trash trolls all over the world. 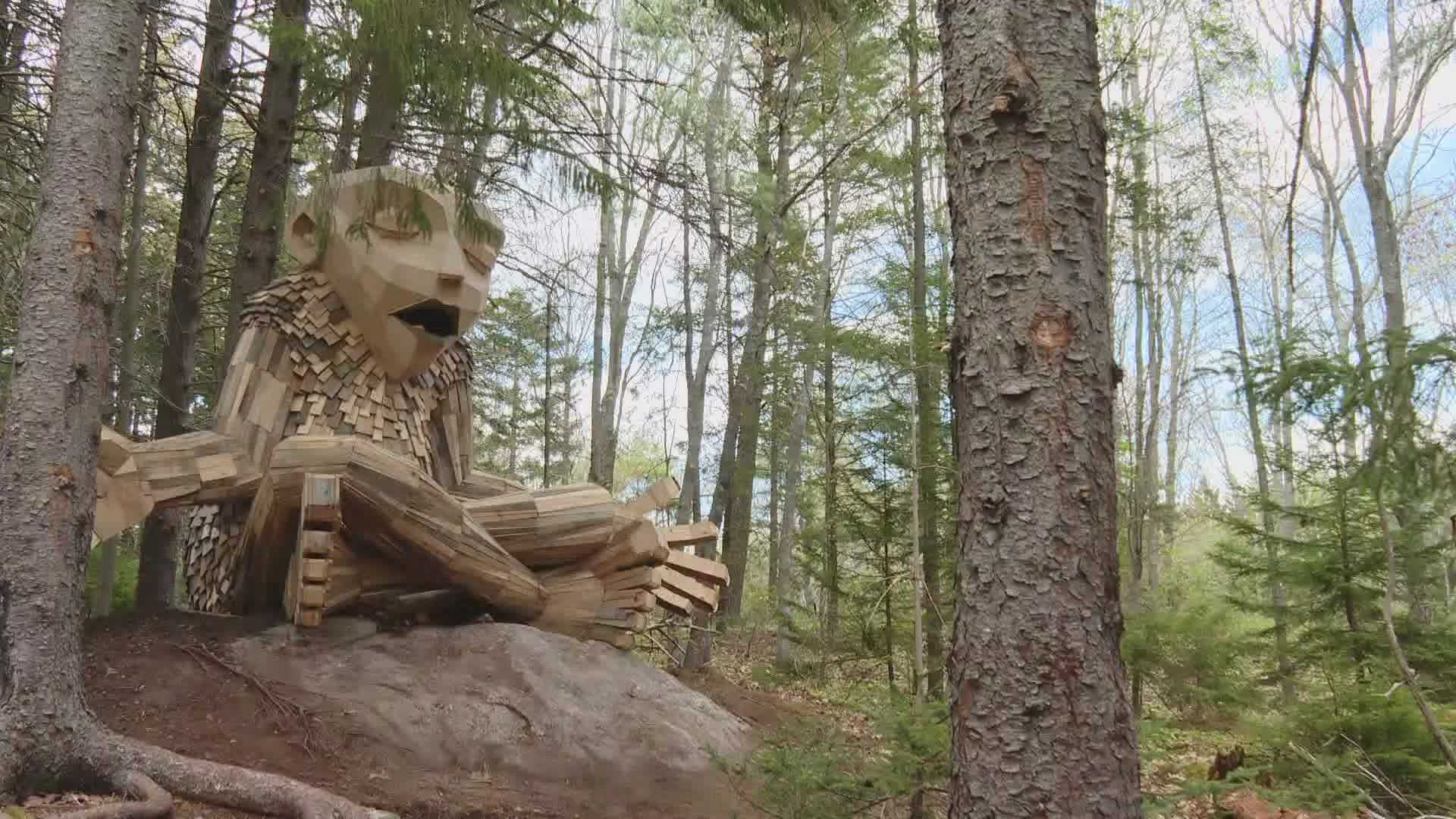 Five mythical trolls have taken up residence in the forest at the Botanical Gardens—tucked in the woods and hidden on paths that force visitors to go hunting for the friendly giants just to catch a glimpse of them all.

The father of the trolls is a Danish artist, Thomas Dambo, who considers himself a recycled art activist. Dambo spent the last several weeks creating five, 20-foot-tall sculptures made completely from recycled materials, most of which were found nearby Boothbay.

"I like to think that I write modern folklore stories about the current issues of the world," explained Dambo, who is trying to share a message of conservation.

For him, they represent the yin and yang of nature.

"If you don't treat nature nice, then nature will stand up and roar and blow your house over. But if you're treating nature really, really good, it will provide everything you need," Dambo said.

He has made a career creating trolls made of trash all around the world.

The whimsical trolls, which take 500-plus hours to build, are inspired by Dambo's Scandinavian heritage and serve as an example of the beauty that can come from recycled items.

The trolls are made of recycled timber like old pallets and fallen branches, 95 percent of which comes from nearby, the other 5 percent, like the eyes, Dambo creates at his home studio in Copenhagen and brought to Maine.

Trash now becoming a Maine treasure for as long as the trolls live, which is usually five to 10 years.

This spring, there are more than just flowers at the Coastal Maine Botanical Gardens

The sculptures are part of a two-year, $500,000 collaboration with Dambo and the Gardens. On this project, Dambo enlisted the help of 150 volunteers to erect the mischievous creatures that all have a Danish name of significance to the surrounding forest. These five new trolls are now added to Dambo's family of 80 other trolls located around the world from Korea to Puerto Rico.

The five trolls are writing a modern-day fairytale—they're protecting seeds that have been hidden deep in the woods and if visitors find all five they will solve the riddle as to where the seeds are.

"There's a message that all of us do our part to conserve the environment and protect the resources we have around us and be stewards of the forest," Daniel Ungier, vice president of guest experience at Coastal Maine Botanical Gardens, said.

Gardens staff say during the pandemic, fewer out-of-state tourists visited the Gardens but more Mainers came to enjoy the 300 acres in Boothbay. The new exhibit, which doesn't officially open until Memorial Day weekend, is another way the staff is trying to attract a new crowd to not only the Gardens, but to encourage people to get lost a little in the woods.

"We know that people who have meaningful experiences outdoor they're more likely to become stewards of the environment and we know that they're happier and healthier and they're more effective in their lives," CEO and President Gretchen Ostherr said.

The trolls are large than life but to children, they are "humungous," as one five-year-old said. Dambo said children are encouraged to play and interact with the beasts but not to climb.

Staff at the Botanical Gardens recommend visitors pre-register before visiting because of COVID-19 guidelines that are still in place. Dambo left Maine last week for Jackson Hole, Wyoming where he is building yet another troll, which will be his 81st.