Students in Maine can circumvent long wait-lists for commercial lobster licenses by getting started as young as 8 years old. 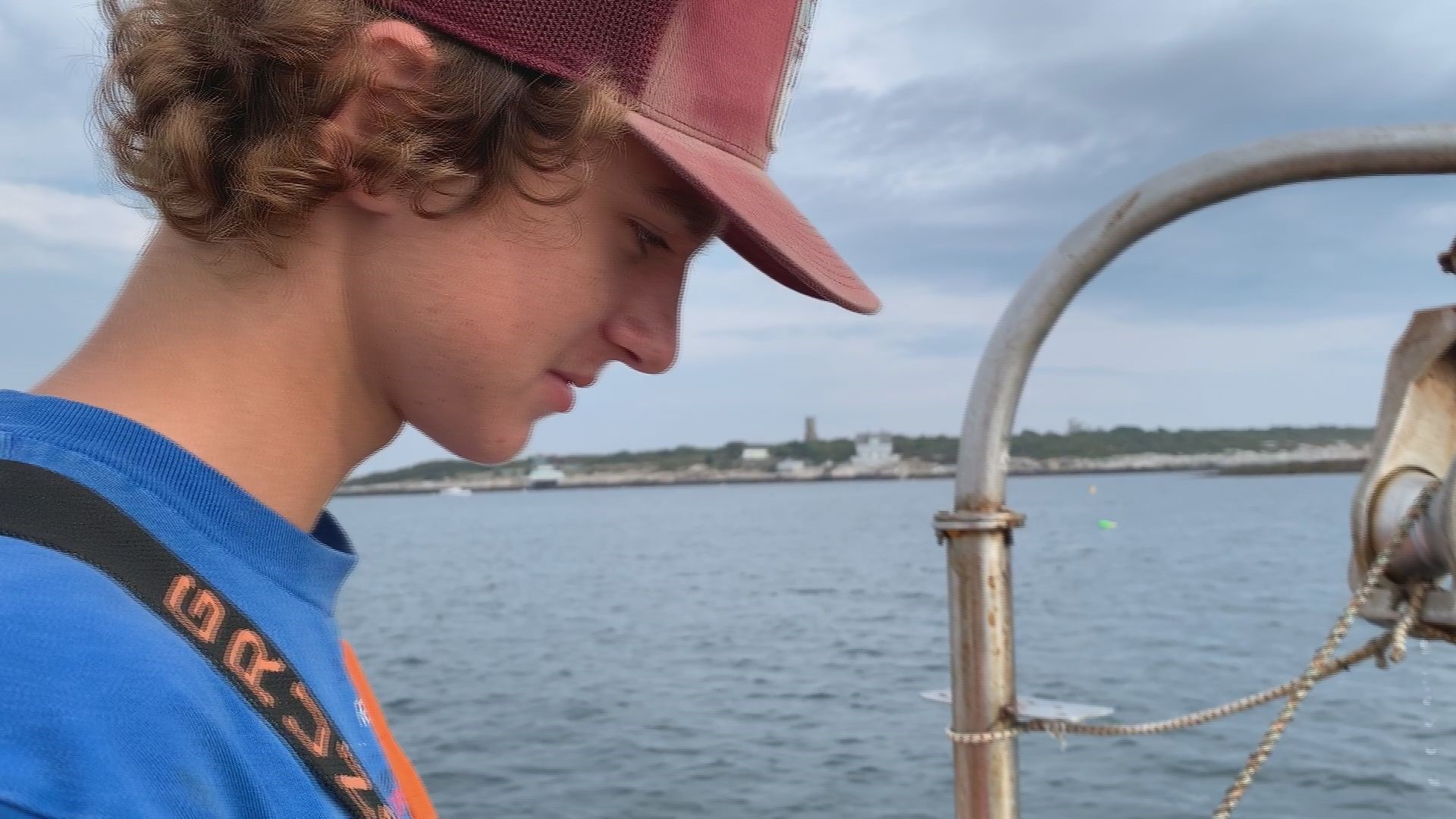 KITTERY, Maine — Zac Foye may only be 15 years old but at 6 foot 1 inch, his height and poise suggest a much older age. He is an incoming sophomore at Traipp Academy but he already knows what he wants to do with his life and has gotten a jump start on his future career.

Zac, who comes from a long line of lobstermen - both his father, grandfather and great-grandfather lobstered at one time, has himself been hauling pots on the Piscataquis River since he was just 8 years old with a state of Maine student lobster license.

Zac has always been attracted to the open water and salty air and last year he started apprenticing under commercial lobsterman Eddie Foye, who is a distant cousin Zac had never met. Eddie has been lobstering for three decades at the Isle of Shoals and has mentored his three children including his 17-year-old daughter Raegan Foye.

This past summer Zac completed the 1,000 hours of lobstering with a mentor, a requirement under the student apprenticeship program in the state of Maine that guarantees kids can get a commercial lobster license when they turn 18 if all the requirements are met.

To complete the program, students need to log at least 1000 fishing hours over a minimum of 200 fishing days over a two year time period, working with a sponsor who has a lobster license. They also have to submit documentation of completion of a United States Coast Guard approved Fishing Vessel Drill Conductor Course. If that is done, students can get a commercial lobster license circumventing wait-lists that in some places are ten years long. Students have until they turn 23 years-old to complete the requirements.

The number of traps that students can use increases with their age. At 8 years-old only 10 traps are permitted but from 14 to 22 eyars-old they can fish 155 pots. There are currently 976 student license holders in Maine.

Because school let out in March due to the coronavirus, Zac was able to spend more time on the water and complete his 1,000 hours much sooner than expected. He currently has 50 traps that he checks on twice a week.

Twice a week Eddie drops off Zac and his daughter Raegan to a 18-foot skiff that is docked a mooring at the Isle of Shoals. The two teens maneuver around the small chain of picturesque islands and howling seals to haul their traps. Together they sift through their lobsters checking for eggs and measuring to make sure they are just the right size. The crustaceans are banded, the traps are baited, and reset. The work is hard and the hours are early; the boat leaves the dock by 4:30 a.m. but the two teens say they love the work and they are making some serious money doing it.

When Zac isn't hauling his own pots, he helps his mentor at least one day a week. For both Zac and Raegan, the work isn't just enjoyable, but its a family tradition. Zac's great-grandfather, Myron Foye, started lobstering off the coast of Maine when he was 15-years-old, the same age as Zac, 100 years ago.

Credit: contributed
Zac Foye was only 8 years old when he started lobstering. That is the youngest age students in Maine can get a lobster license.

"They created a legacy for us to fulfill," says Raegan of her ancestors as she steers the skiff headed to her next trap. She is heading into her senior year at Marshwood High School and when she graduates she wants to get a degree in business to help out the family lobstering company.

"I just like it. Its fun" says the quiet teenager. Lobstering is in their blood and they intend to carry on the tradition of their fathers.