Friends Steve Ross and Dave Odgen love the ocean; it's been their playground for decades. It's also how they met each other so every morning they clean it. 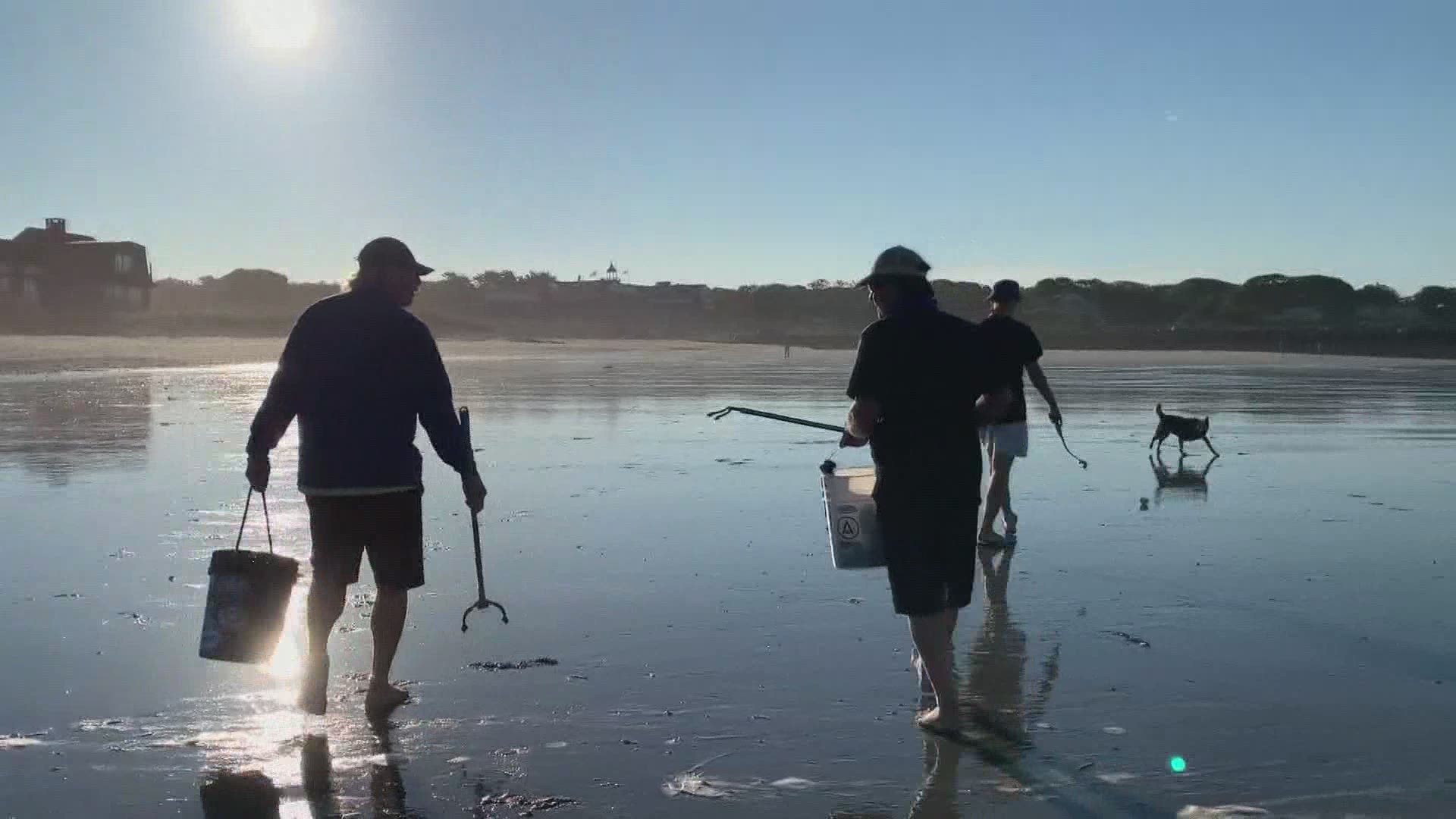 KENNEBUNK, Maine — The ocean has given a lot to Steve Ross and Dave Ogden of Kennebunkport. For these surfers, both in their sixties, the beach has been their playground for decades. It's also how they met each other about seven years ago. So without longterm intention, the pals started walking Gooches beach each morning at sunrise, combing the sand and seaweed for trash in an effort to keep the place they love clean. That was five years ago.

Nowadays just about everyone on the Kennebunk beach in the morning know these two as they saunter up the tide with buckets and tongs in hand searching for trash and inspect the surf out of the corner of their eyes.

"Its a hell of a way to start your day every day," Odgen smiles behind his glasses, as the glint of the early morning sun colors his face in a golden pink hue.

"God equals nature, nature equals god," explains Ross, who is originally from Montreal but the retired teacher has lived in Kennebunkport working as a carpenter and painter for several decades.

"We surf and everything and we love the ocean...This is just a way of giving back," says Ross who if he is speaking can't help but smile. Each morning Ross' herding dog Nellie leads the clean-up crew, demanding a ball to run after as Ross searches for trash.

"We get competitive cans are worth five points, flip flops are two points then we sell the flip flops or flip flop half price cause you only get one," Ross chuckles as he throws a tennis ball to occupy Nellie for a half a minute.

Their clean-up starts usually at 6 a.m., they don't take weekends off and they go all year long. Ogden winters in Florida but cleans up a beach there when he's not in Maine.

They tell me about all the treasures they've found over the last few years, a GoPro camera, a VHF radio, and even a SharkBanz, a strong magnet worn by surfers and swimmers to deter sharks.

But the treasures are few and far between. Mostly it is just a lot of trash pushed up against the cement seawall by the tide. The friends use tongs to scoop up small bits of plastic, bandaids, and ballons into their ten-gallon buckets.

"The small stuff that's the stuff that hurts the wildlife, the sealife the smaller stuff. They try to eat it so we try to get everything we can see," explains Ogden.

This year they have seen less refuse than in past summers because of course there are fewer people on the beach due to the coronavirus and travel restrictions. But at the end of May, Odgen found something they never thought they would find on the Kennebunk beach: a syringe.

"That was kind of disheartening," says Ross.

They find discarded boogie boards and beach toys, used only a couple of times, and then abandoned by tired tourists. Ogden fixes up the boogie boards and the men try to find homes for the boards, usually local kids.

Along their two-hour clean up route, Ross and Ogden quickly chat with friends, many of whom spare a moment or two the day I walk with the men, to give them a healthy ribbing.

"I point out the stuff they miss so they go and pick that up too," says one man. "They’re selling all this stuff," says another.

And they make new friends too, stopping to chat with some surfers camped out on the seawall waiting for the swell to rise or a passing "Good morning" to a walker or jogger on the nearby sidewalk.

Credit: NCM
Dave Ogden helps his buddy Steve Ross zip up his wetsuit before the surfers head for the waves.

When the work is done and if the waves are good, Ross and Ogden head for the water. The day I am out with them they decide to bodyboard, Ross on his homemade wooden board fashioned in the style of Japanese paipo board.

"It's amazing how much my life revolves around the ocean, saltwater in your veins," exclaims Ogden.

"I'm not much of a religious guy but we go to the church of the open sky and the wet water," smiles Ross.

And although the friends really are not looking for any recognition or praise, people have started to notice them after five years including former President George H. Bush who walks the beach often and his sister Dorothy Koch.

"It's impressive and inspiring that they do that and we all appreciate it and so it's wonderful," says Koch as she chats with Ross and Odgen. "They're just wonderful people. I've known them for years and they've been doing this every morning and what a service to the community."

Beach-goer Jeff McCulloh took a picture of Ross and Ogden and Nellie a couple of weeks back and posted it to Facebook.

"I think that's really part of what a community is, its connections between people. We help each other and these guys exemplify that. They’re awesome," says McCulloh.

But for Odgen and Ross, it is just a small, simple way of giving back to the ocean and beach community that has given them so much.

"I used to teach and one of the things I used to tell the kids is one knows the worker by the work," says Ross.