'Dangerous at times,' but a great opportunity to provide 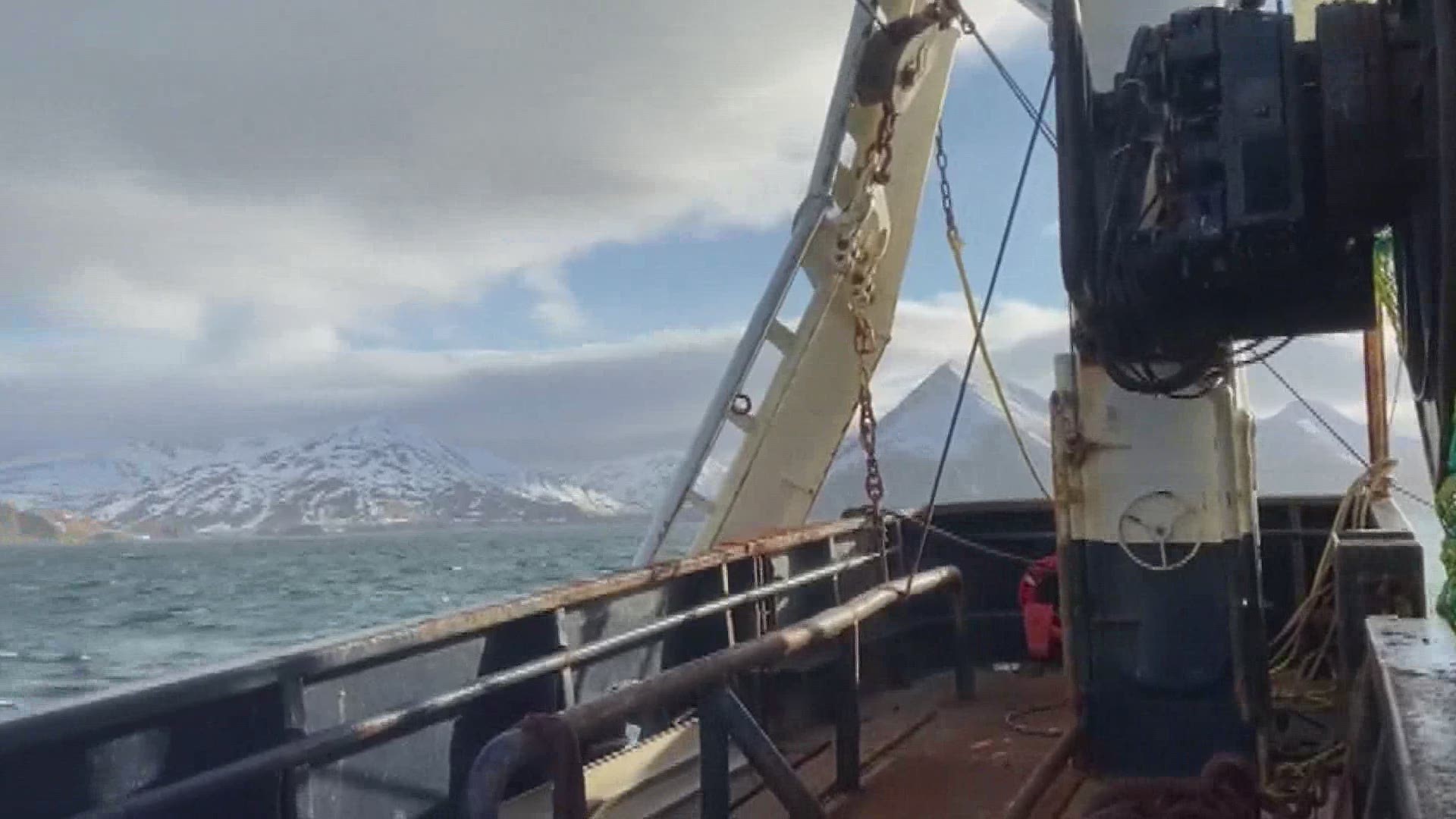 CAPE ELIZABETH, Maine — We first met Taylor Strout of Cape Elizabeth back in February when he was fishing aboard a boat out of Dutch Harbor, Alaska. His fishing season there is three or four months – then he returns to Maine for a few months at home. The work is rugged and at times extremely dangerous – and he is okay with that.

Fishing simply runs in his blood.  Like all industries, commercial fishing was impacted by the pandemic – and for a short time, at the start of the season – he did not know if the crew would be able to fish at all. Here’s a look back at his story, with an update – and spoiler alert—he is home, safe and sound.

From Maine, it takes him a good 24 hours -- and four airports -- to get where he is going. Taylor Strout is a mate aboard the Fishing Vessel Northern Defender which, when we talked, was tied up at the dock in Dutch Harbor. The Aleutian Islands split the Pacific Ocean and the Bering Sea, and they fish the Bering Sea. As the crow flies, he is more than 4000 miles away from home.

RELATED: "You're taking everything up to a bigger scale": Life for a Mainer fishing in the Bering Sea

What is the draw? "It’s kind of a different level of fishing out here. And it was something that I’ve always wanted to do and try back when I first got into it. I had the opportunity to do it, and to try it, and I didn’t just try it, I ended up kind of falling in love with it. And continue to do it since. I love the rotation of it. You know, you go to work, you work hard, you put it in there, and then when it’s time to go home and focus on your family you get to come home and just be Dad and take care of the family that way too," says Taylor.

There are two seasons to this fishing rotation – generally mid January through April, and then June through October. For those months, six men crew and pilot the 150-foot-long vessel. Living quarters, a galley, and enough equipment and power to catch and haul 800,000 pounds of fish back to the processing plant.

Taylor describes it like this: "You’re basically towing a football field behind you. You’re taking everything up to a bigger scale when you’re on some of these boats. Bigger weather, there’s bigger seas, sometimes we fish in 15 foot waves to 25 foot waves."

Early in his season, two of the fish processing plants in Dutch Harbor closed down. Taylor, now home, recalls the uncertainty. "At the beginning we were terrified. What was gonna happen… whether… A season OR B season…we didn’t know whether we were gonna have a summer – a summer season, everything was up in the air. And we’re so far away from everything out there – half way out in the Aleutian Chain. We were unsure of the resources that were gonna be provided for our fishing community. And, and at the end of it, we were very well taken care of – fishing is extremely important in Alaska as it is here in Maine."

They headed out on their first trip – and as soon as they got to the fishing grounds, they got a call to turn around and go back. They stayed at the dock for two weeks waiting for an update. Two weeks turned in to a month.

"Guys were thinking of going home. And then the panic sets – are we gonna get a paycheck this year? And so it was scary - for sure. And that was just the start."

Eventually they were able to fish – despite not reaching their full quotas. This particular trip presented some really challenging weather. When they were given a window to fish, they had to seize the opportunity.

"There’s 15, 20 foot waves that were coming over the rail and with JV Cod, that’s where we’re working – at the rail. To throw the hook, for trailer buoys, so we can transfer the bags."

Back in February, we also spoke with Taylor’s wife Nikki.

"I have had far more anxiety this time than I have ever had with him being out there and I know the men on his crew and I think they are incredibly talented and safe and hardworking fishermen but from what we’ve seen in the last year or so, there are things that are just out of your control," says Nikki.

Nikki and Taylor have three little boys, so when Taylor is gone, Nikki says she has her hands full.

"He is definitely not the kind of person who can sit in an office. He loves his job, and so when you find something that you love, and he’s so proud of it, I could never ask him to not do it. It’s tough, and the time away is really tough, but he’s really happy doing what he’s doing, and I’m proud of him too. Being a fisherman is not an easy job."

This season has concluded, and Taylor is now home until late July or early August. The rhythm of their lifestyle is something this family embraces.

"When I left, our whole plant and all the other plants were fully vaccinated, all the boats were fully vaccinated, the community first was vaccinated and then after that it was to the plants, the fishermen, all the boats," says Taylor. "So the community was in great shape. We know this is what I do, I love it, I know it’s dangerous at times, but it’s a great job, it’s a great opportunity to provide for my family, you know fishing’s in my blood and it really is worth it when I get to come home and see the boys and Nikki and know that I’m Dad now."

Taylor says the summer weather in Alaska is quite beautiful – and he anticipates the community will be fully back on their feet when he returns for his next trip.