Jonathan Perkins is the cofounder of SuperRare, a website that sells original works of digital art as NFTs. The market for NFTs is exploding but is it sustainable? 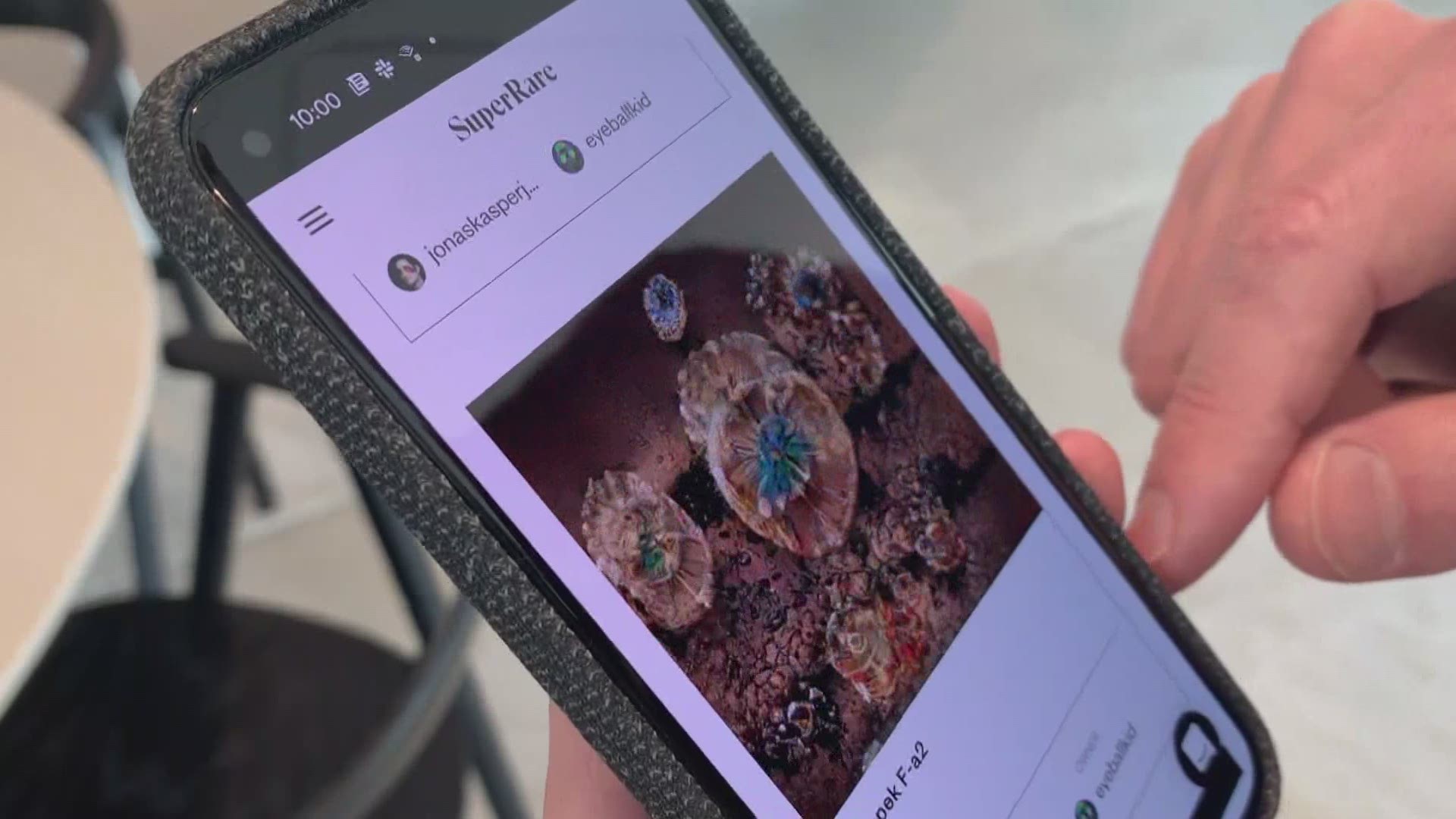 PORTLAND, Maine — Most of us don't spend a lot of time thinking about art or trying to understand it. But there is a new craze in the art world called NFTs - digital art you own but that lives online. NFTs have attracted some serious buzz lately, in large part because of the extreme prices people are paying for them.

In March, the artist known as Beeple sold a collection of digital artwork or NFTs at Christie's for a record-breaking 69.3 million dollars. Celebrities and athletes are also jumping on the bandwagon selling selfies and pictures for incredible prices.

If this has you scratching your head, you’re not alone.

NFT stand for non-fungible token. Non-fungible means not interchangeable, so the value is not a set price but varies depending on how much someone or the market deems it is worth. The token part represents how it is stored and sold through a blockchain which is like a digital ledger. The ledger records the history of everyone who has owned the NFT and makes it so it cannot be deleted or duplicated.

A photo, video, audio, and other types of digital files can all be NFTs.

Even though the blockchain attached to each NFT shows who owns it, people can still take a snapshot of and owning an NFT does not mean you own the copyright to it.

So why would you want to own something that other people can have as well?

I spoke to someone who has been dealing in NFT art since 2018. Jonathan Perkins is the cofounder of SuperRare.

"One of my friends in the early days said, 'whoa you're like a futuristic art dealer,'" explains Perkins.

SuperRare is a digital art collecting platform. Creators sell their digital art, some of which looks like pieces you might see in a museum, others are videos with music, on Perkins sight. When he launched his sight, they had a small handful of NFTs to date they have more than 11,000 and artists on SuperRare have made over $50 million.

"NFTs are essentially digital objects that one can collect trade or sell later just like you can a physical painting for sculpture," says Perkins.

But why buy a piece of art that lives online?

Perkins says you can buy a digital frame and display it in your home but he points out that viewing a collection online has merit for some.

"More and more of our social identity is going online. If you own an art collection online 6 billion people can view it. If you own artwork in your house maybe one or two dozen of your friends can view it," says Perkins.

Perkins says the NFTs which are purchased using digital currencies like bitcoin and ether have been a benefit for online creators and artists.

"Some of the best digital creators in the world really have to form their career around doing graphics for movies or advertisements...and now they can do fine art and sell it directly to collectors," explains Perkins.

The industry is not necessarily attracting art collectors. It is attracting investors and Venture Capitalists. SuperRare recently received $9 million from well-known investors like Mark Cuban and Ashton Kutcher. In part because of the amount of money that people are making off of selling or reselling NFTs right now.

207's Tech Guy Rich Brooks is not an expert on NFTs but is watching the phenomenon with great interest.

Whether it is a fad or the future is still unclear but as Perkins explains there were plenty of people that thought the internet was a passing fad. The blockchain space may not be able to hold the value on NFTs forever but it may be an early iteration of how we buy, sell and own things online in the future.