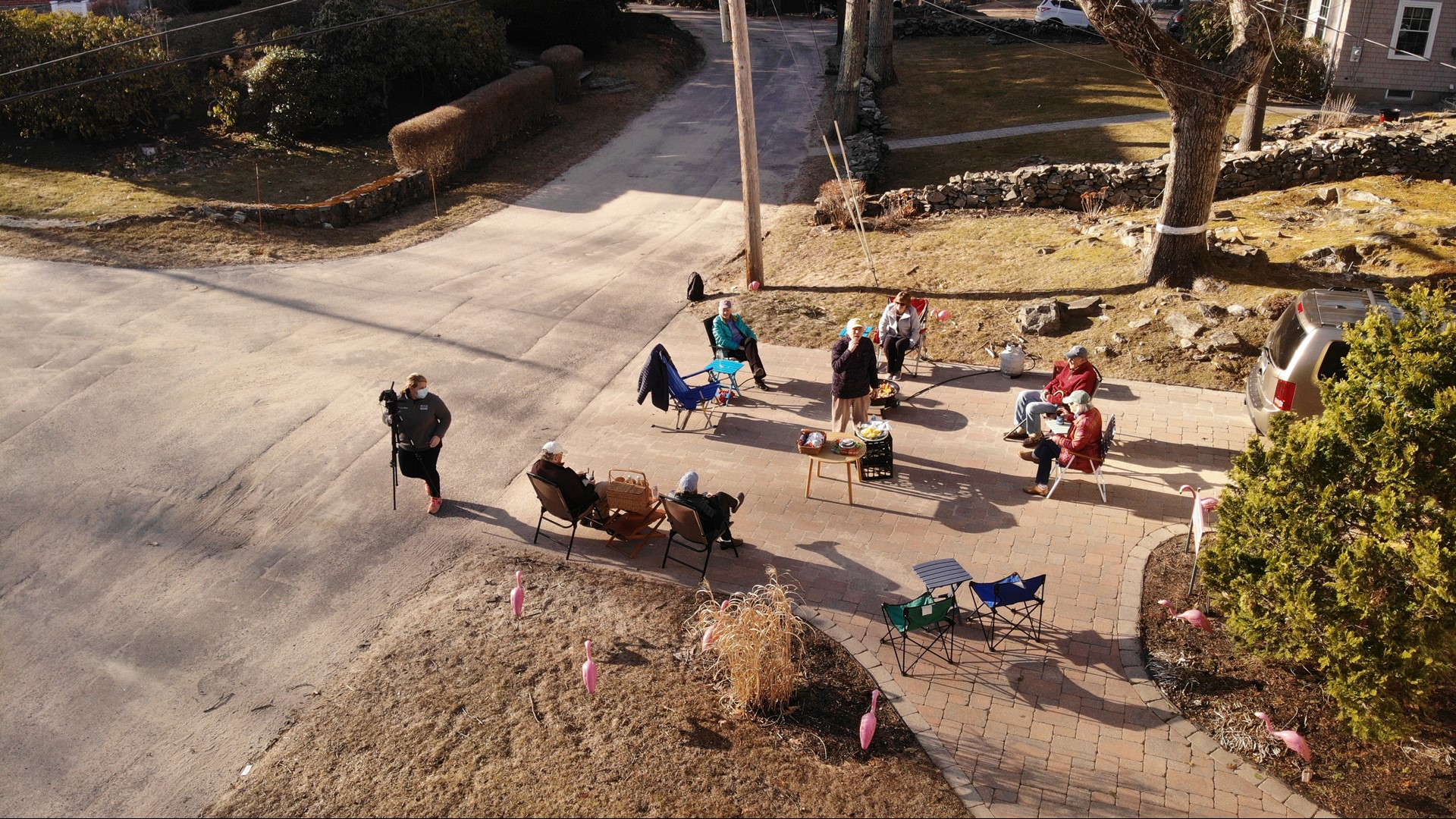 CAPE ELIZABETH, Maine — The saying goes, "good fences make great neighbors." Not so for the neighbors who live along Ivie and Wood Roads in Cape Elizabeth.

Last year, as we all grappled with how to navigate a pandemic, these friends found a way to corner the market on community.

Since March of 2020 these folks, who have all lived in the same neighborhood for at least three decades, started meeting from the corners of their yards several nights a week to check in with one another, as their social circles shrank and all stopped being able to see their grown children and grandchildren in person.

A year later, they are still at it.

Now that all the couples are vaccinated, they have moved in closer but not indoors. They gather in Tony and Cathy Ornatek's driveway, where the sun shines on them as it sets, in the spot they've named "Quarantine Corner."

On March 22, 2021, the neighbors—which include the Ornateks, Randy and Kathy Blake, Christine and Joe Groff, Jennifer and Dan DeSena, and David and Elizabeth Pratt—toast to celebrate the one-year anniversary of "Quarantine Block Parties."

"When I think back on March 16, 2020, it was hard to believe or imagine that a year later we'd still be doing this," said Christine Groff, whose husband is unwell and so remains at their home just yards away.

"For me, it's been a lifesaver," Groff said.

Even a cold New England winter couldn't deter these hearty Mainers from meeting outside. They bought outside space heaters and new snowsuits for adults to make it possible.

The Ornatek's lawn is littered with pink flamingos that have become the group's mascot, and most of the neighbors wear baseball hats with a flamingo that Elizabeth Pratt had made for everyone.

Meeting together and often has been a highlight of their year.

"We were already close," Cathy Ornatek said. Living next to someone for almost four decades will do that but for these neighbors, the pandemic has brought them even closer.

The idea to meet was Randy Blake's. He knew they needed to make sure that all of their neighbors were doing ok especially those dealing with health issues or caring for ill spouses. But the benefits of meeting safely from a distance have been tenfold.

Watching the neighborhood children learn how to ride their bikes and grow over the last year as they scoot, skate and ride by, stimulating conversation, and staving off loneliness have been just some of what their gatherings have provided.

Some people go next door for a cup of sugar—in this neighborhood, you don't even have to ask for help.

When it snows, Christine Groff says her neighbors shovel her driveway and when she loses power they help her hook up her generator. The Quarantine Corner has just been another way for these folks to be good neighbors.

"We help each other out and any one of these people would do anything for me if I needed it," Dan DeSena said.

Tony Ornatek said, "Being a good neighbor is the same as being a good friend."

"Get to know your neighbors," Cathy Ornatek advised. "You probably have more in common than you think."

So how long will their Quarantine Corner continue? Tony Ornatek doesn't hesitate: