Darfur United players stay in the game while on hold

Brothers Hany and Iessa Ramadan are home in Maine. 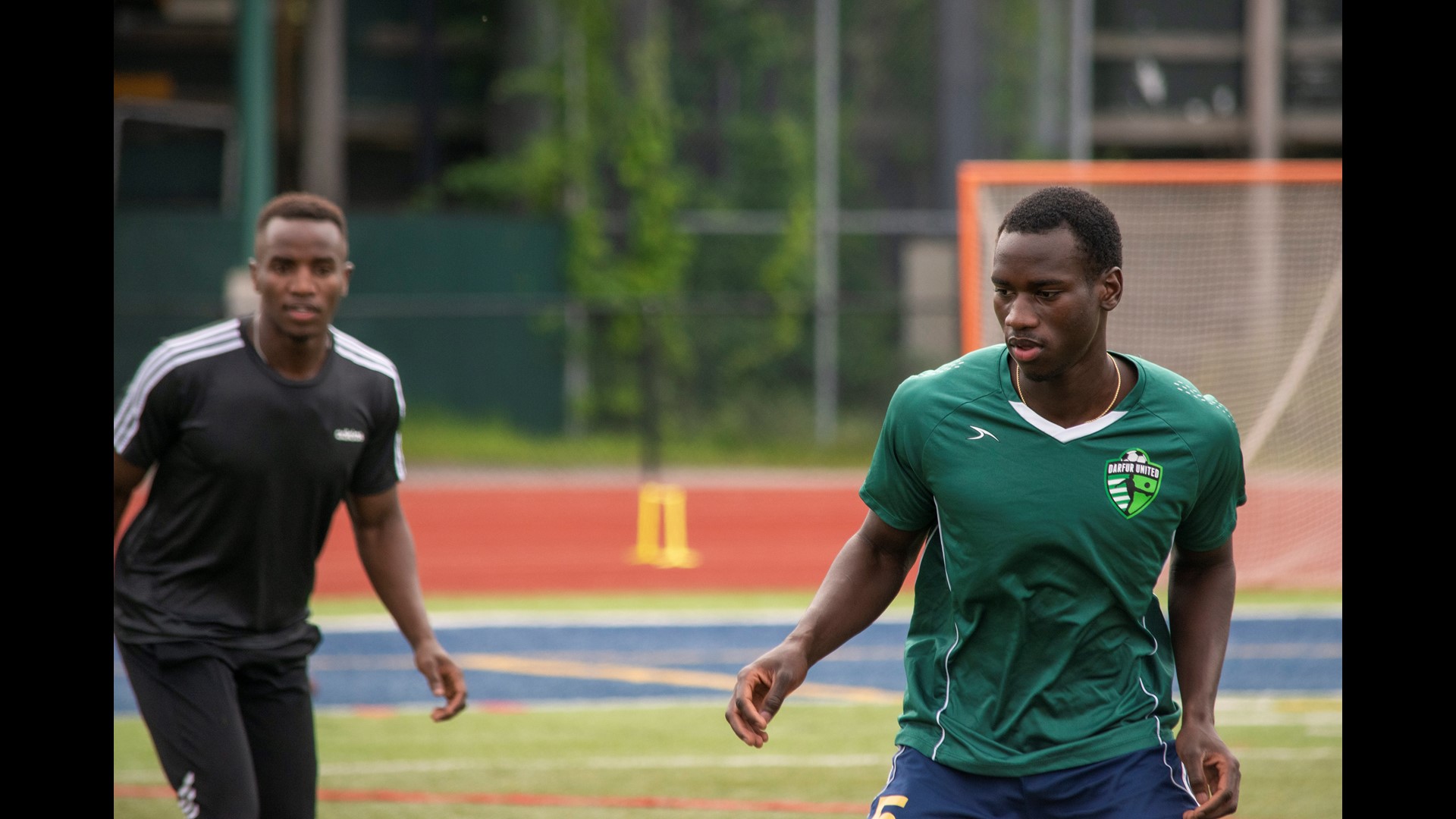 PORTLAND, Maine — Darfur is in the western Region of Sudan in Central Africa. It is about the size of Texas. In 2003, we heard a lot about genocide in Darfur– as the government of Sudan waged war on the indigenous population. Villages were destroyed, hundreds of thousands of people killed and even more displaced. The situation continues today. This is a story of hope, as two players on one soccer team work to travel the world and tell the stories of the people of Darfur.

Hany and Iessa Ramadan are home in Maine, and on a hot July afternoon, playing pick up soccer with friends. They are brothers, and teammates on Darfur United. Something they dreamed about as little kids.

"We been watching Darfur United since they started," says Hany.

Darfur United is an all-refugee soccer team, founded by of iACT, a humanitarian organization, created  by Gabriel Stauring. Gabriel made his first trip to Darfur in 2005. "I became involved at the beginning – I felt some type of personal responsibility, I felt that I needed to go see what was happening. It was of course, life-changing. I thought it was only gonna be one trip, and again I’d come back and continue with my life and I’ve now been down there 31 times. My activism evolved into humanitarian action and the founding of iACT."

IACT is a non-profit geared toward supporting communities impacted by mass atrocities. And on that first trip, Gabriel innocently stumbled on one of the directions that iACT would take. "The violence was still so fresh in their faces – they still had that blank stare – and you could see the pain – that to us, unimaginable. But, I brought out a futbol. And we started playing. And in that moment all of that just went away. So they were no longer victims, they were no longer even refugees – they were experiencing the joy of the game. From that moment I knew there was something special about this game that has amazing power so I knew we had to do something with it."

iACT launched Darfur United, a team made up of refugees from the Chad and Sudan border. "Flash forward years later we had the opportunity to create a team from the best players in these camps. And that was the birth of Darfur United which continues today," adds Gabriel.

Hany and Iessa Ramadan’s parents are from Darfur. As children, they moved to Khartoum because it was safer. "When the war started? A lot of people just migrated away because there is a lot of murder happening there, and a lot of rape," recalls Hany.  They remember a lot about their childhood, and many of those memories included – soccer. "I would just get in to the field, try to run in to the field, but then they were like “oh you can’t be playin cuz you’re too small, the ball might hit you…” something like that. But I always try to play with them," laughs Iessa. They also remember meeting Gabriel when they were kids and dreaming about being part of Darfur United.

"Kids - you know when they start playing soccer -  they just kind of forget the things that happen, the genocide, and all this killing that happen in the country – it’s a way to forget everything. Just enjoy the game, enjoy the moment," says Iessa. "Right now it’s a little bit safer? But still killing, still happening. People just don’t’ know about it because there’s not media there. It’s a danger zone."

In 2012, Darfur United  overcame enormous obstacles and competed in the World Cup competition for teams not represented by the official soccer world.

"It was just an amazing journey – for the players, but then for the entire community – It was so much more than the game," recalls Gabriel.

Hany and Iessa and the Darfur United team were poised to again compete in the World Cup in North Macedonia this past June, but the pandemic put all those plans on hold. Like many sidelined athletes, they continue to train, and play, and prepare for the opportunities that lie ahead. All the while hoping to remind the world that Darfur still needs our help and our attention.

Gabriel sums it up this way. "(Hany and Iessa are) full of joy.  They’re like hope in action in that they see what they can do for themselves and for their people. They give it their all on the field, but then off the field they are as generous and they WANT to do better for their people."

RELATED: Babe, the little dog who defied the odds