Nick Shelton is a potter and wasn't about to let something like a pandemic discourage him from launching his first store, The Art Walk, in downtown Winthrop. 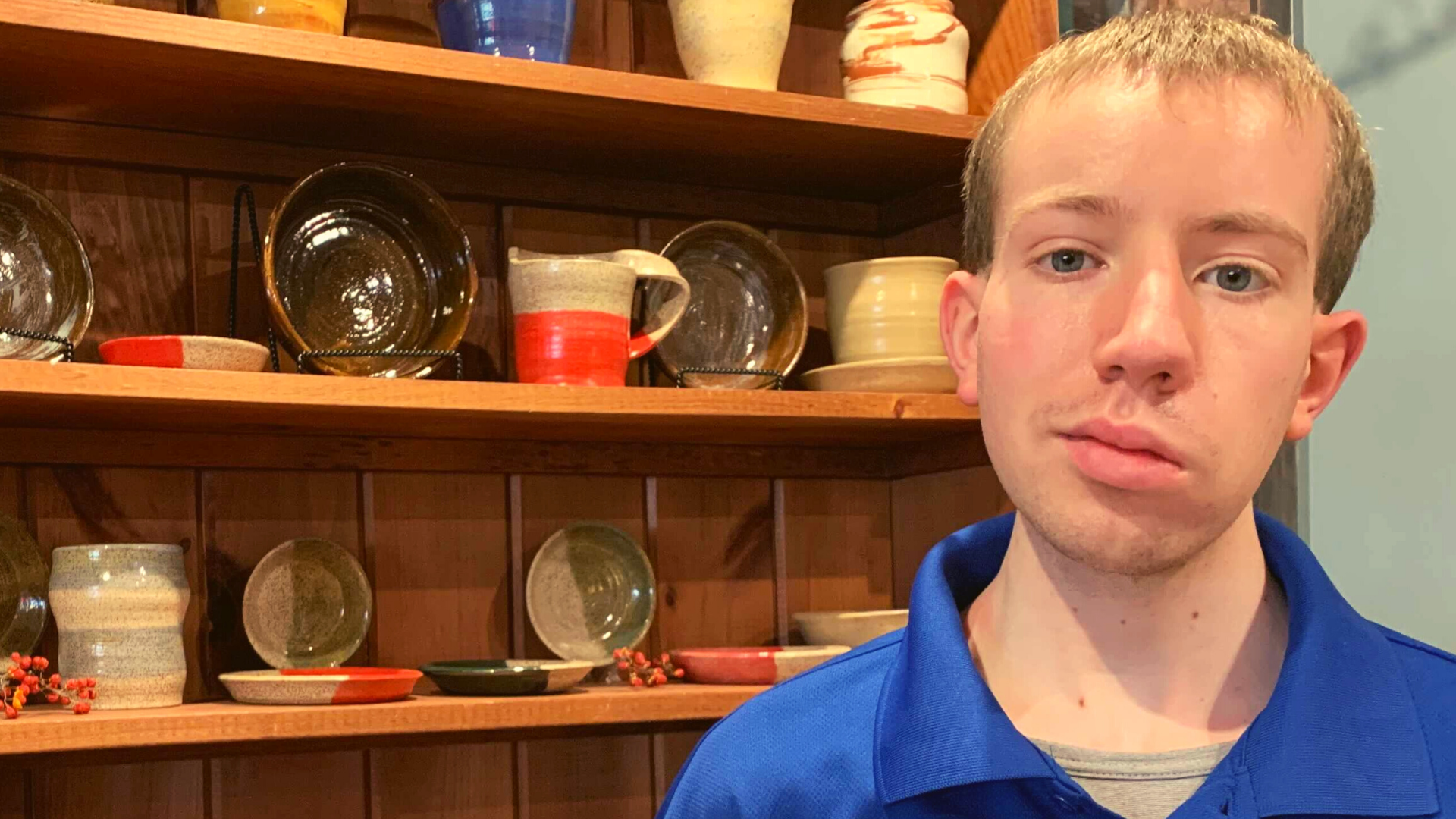 WINTHROP, Maine — Starting a small business takes grit, optimism, and belief in yourself but opening a brick-and-mortar store in a small town, during a pandemic - that’s a real challenge. For potter Nick Shelton, rising to a challenge is nothing new; he's been doing that his whole life.

We caught up with Nick in the basement of his newly opened store, The Art Walk Shop and Studio in downtown Winthrop. He sits at his potters' wheel, hands covered in clay and he's at home here. At just 20-years-old, Nick has spent countless hours throwing clay, honing his craft.

"I didn't know what I wanted to do when I was 20. I still don't know what I want to do at 48 and he knows what he wants to do and he's been doing it," said Nick's dad Joe Shelton who helped his son open his business in November after all the shows where he usually sells his work were canceled.

Pottery is more than a job, it's a passion one that Nick has been moving toward since he was very young.

"That it's been around for like thousands of years and just the way it looks and feels is really cool," Nick explained.

Nick was first introduced to pottery when he traveled to Egypt when he was eight. The Make-A-Wish Foundation sent Nick on the adventure he chose because he had been battling brain cancer.

When Nick was just three-years-old his parents, Joe and Terry Shelton noticed their son wasn't feeling well. He was getting sick in the mornings shortly after waking up. Doctors suspected he might have food allergies but when Nick became lethargic and complained of his head hurting they knew it was serious. He was diagnosed with medulloblastoma. A tumor was growing at the base of his brain attached to his brain stem.

"For his 4th birthday, most people get a party. He had surgery to remove this cancer," remembers Joe Shelton. Nick doesn't remember much about this time. His surgery lasted more than 10 hours at Barbara Bush Children's Hospital in Portland. When he woke up, Nick couldn't talk or walk and wouldn't be able to for months, but slowly with the help and patience of his family, he regained his speech and movement.

"It put him on a path that I don't think he would have been on otherwise," explains Joe Shelton. A path that took him to the Middle East through Make-A-Wish Foundation. It was a wish that completely surprised his parents.

"We thought he wanted to go to Disney World," chuckled Joe. But Nick wanted to explore all the things he'd been reading about in books.

"I saw mummies. I got to ride a camel. I went on some digs. I got to see all the pyramids and all the tombs that they found and everything that they excavated," recalls Nick. It's here he saw pottery for the first time. The trip had a lasting effect and when Nick got home he joined Boy Scouts and began to pursue a pottery merit badge. He got good, really good.

Nick has decided not to go to college but pursue a career as a potter. He spends three days a week creating pottery for his shop and the rest of the time he works in the store, helping customers and coordinating with the some-odd 30 other artists who contribute to the store.

"There's a lot of pottery shops all across Maine. What makes this shop special is all the people who are participating and that's one thing that (Nick) learned early on, we learned early on that without them we don't have a business," Joe said.

Joe and Terry Shelton are helping their son with the business side of running a store but they leave the art to the artist. In a few years, they hope Nick will be running things completely by himself.

Nick has big plans for the future. He's currently working to finish the studio space beneath the shop and he wants to offer pottery classes there and allow other artists to hold classes in the space. Nick and his dad said the support from the community has been tremendous and they’re happy to be contributing to a thriving downtown in Winthrop.

Much like the clay, he molds into art, creating The Art Walk is just another step on Nick's journey.

RELATED: A magazine for seniors helps young Maine man pop the question to his girlfriend