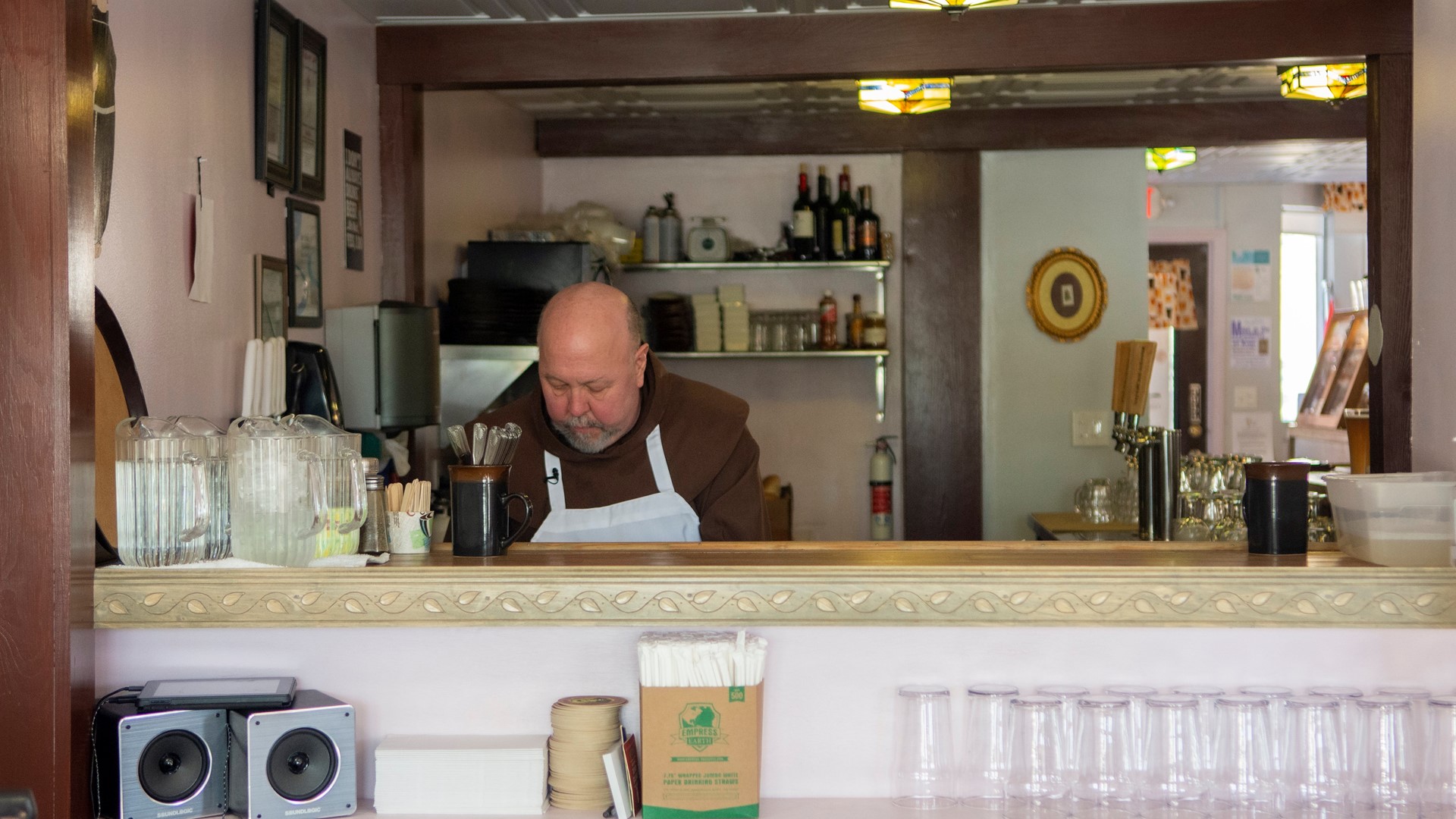 BUCKSPORT, Maine — There are plenty of places along the coast of Maine where you can stop for lunch or dinner. There are few where you can get a sandwich -  and a beer - with a side of the divine. Five days a week, if you stop by the Friars Brewhouse Tap Room, you’ll be greeted by Franciscan Brothers who have trusted their intuition, their strong belief in the hand of God, and their talent with water, grain and yeast  – to find their way to Main Street in Bucksport.

Breaking bread is a universal symbol of community, at the heart of Christianity. For Brother Don Paul, and Brother Kenneth Leo, making bread – more than two decades ago – is where their ministry first took shape. The Brothers bought an antique bread-making machine -- the kind that hooks to the side of a table, for $15. Mostly on a whim. Brother Don started experimenting with bread-making, and found it was something he had a knack for. Together, they made and sold bread, first out of their apartment, then in a church kitchen, and eventually at the beloved Friars’ Bakehouse in Bangor.

The Bakehouse became a gathering spot, a place where friends and strangers alike found common ground around generously portioned sandwiches. "In the 19 years we have people who met and got married from meeting there, lifelong friendships, people that made friendships over the years, there was at least one organ donation that I know of and that was just from… I hate to say it, but literally forcing people to sit… and talk with each other."

The divine seemed to enter in again when a home brewing store opened across the street from the bakery, Brother Don took an interest in brewing his own beer. Before long, his beer was pretty good – and the brewer at the store gave him another nudge.

The Brothers and their beer

“Have you thought about selling the beer?” I said, “No why?” and he said, “Not only is your beer good, but you guys got a backstory to die for.” And I said, “What do you mean?” and he said, “A group of Franciscans brewing beer on the side of a mountain in Bucksport?  What is there not to like?” “I never really thought about it that way, so we went ahead and got our brewer’s license. That was in 2013. And we started selling our beer, just in bottles."

With the idea of doing something closer to home, the Brothers again leaned on their faith, and their success with home brewing beer, to consider the idea of opening a tap room.

It took a lot of faith to envision their next endeavor in a space that in a previous life been a tanning salon.  You can picture it – tiny rooms, and no kitchen… “ I still wonder how we ever walked through that and said, "Oh yeah, this’ll work. I don’t know….what on earth we were thinking.”

That space is now home to the Friars’ Brewhouse Tap Room.

They opened almost two years ago. Brother Don brews all the beer, generally Belgium and German styles -  brewed traditionally as they have been in European monasteries for the last several centuries. With names like Tap into Summer, Whoopie Pie Porter, and Monastery Ale, the award-winning beer brings in the patrons; what keeps them coming back is the warm reception, the lobster rolls, and the Brothers who are always ready to welcome you.

"One of the biggest mistakes people make about ministry is they think ministry happens in churches. Franciscan ministry has always been one of presence. If what you need is someone to listen to you, and to pray with you, I can do that with you. I’m your guy," says Brother Don.

The locals and the winter regulars are used to seeing the brothers serving customers in their traditional brown habits – but for some, that sight still turns a few heads.

Part of the entertainment factor is the décor: Beer mug valences alongside Saintly statues, plenty of signs paying tribute to beer and scripture, a portrait of St Arnolf of Metz, Patron Saint of Brewers, a beautiful bell used for Last Call.

The Tap Room is - like everyone else -- slowly re-opening, offering take out and a few tables of dine in. They are serving lunch on Tuesday and Wednesday, and lunch and dinner on Thursday, Friday and Saturday, closing at 7. You can check out their latest menu here.

RELATED: Brothers brewing beer with an environmental mission behind their business

RELATED: The Maine craft beer boom—how far can it go?

RELATED: Farm-to-table in a food truck