She writes about her Cinderella story in "From The Corner Of The Oval".

SOUTH PORTLAND, Maine — She calls it a Cinderella Craigslist story.  What started as a response to a run-of-the-mill job posting –forever changed the trajectory of her life. Her story starts about nine years ago, when she was a young woman living in Washington, DC.

It was 2012, and Beck Dorey-Stein was scrambling to make ends meet.

"I was working five part time jobs. But in Washington DC, even though that’s the most hustle you could possibly have?.. People kind of, you know you go to Happy Hours and everyone asks ‘what do you do’ and when you say ‘Oh, I work at a coffee shop, and I teach at three different schools and I work at LuLuLemon.'  No one cares. Because that means you have no clout, no connections, no power. No one’s interested," she says.

One of those part time jobs was teaching English at Sidwell Friends – an elite private school the Obama girls attended. To work there, she needed a security clearance. Despite not having the right skills, she answered what seemed like a pretty vague ad on Craigslist  - for a stenographer – thinking the job was at a law firm. "I don’t know how to do shorthand, I don’t have one of those teeny typewriters, I had a bachelor’s degree in English, and I had taught high school English for a couple years...Because I already had a background clearance, that’s why they  took another look at me and thought "well, she can’t be too terrible. Even if she is from Craigslist. We’ll give her a go.”

The job wasn’t at a law firm. Turns out that vague ad she had answered was to serve as a stenographer at the White House, traveling with President Barack Obama. To her complete astonishment, she got the job.

"A White House stenographer – our job is to make sure that – we’re kind of a first line of protection so that the press can’t misquote the President. So whenever there’s a member of the press, in front of the President, I’m usually there too. So that means Oval Office interviews, that means traveling abroad, I’m always there with my microphone which is great! The crazy part, and this never got old, my job would be to follow a reporter in to the Oval Office, put down my two recorders which was always heart-stopping you know because it was like “did I put batteries in?” ”Is it running?” I would put down two just in case… and then I would go just get to sit. You know there’s no corner of an Oval, but basically the corner of the Oval and watch the interview transpire."

Beck found herself with as much access to the President as some of his most senior staff. She recalls her first time in the Oval Office. "The press lines up right outside on the Colonnade, so it’s sort of like (I don’t like roller coasters) going up in a roller coaster and you’re waiting… and then you’re just waiting waiting waiting and it’s my first time so I’m like OMG OMG OMG and then the press wrangler gets the cue like ‘Okay, bring ‘em in’ so it’s like GO GO GO GO GO and everyone’s positioning for the right spot it’s just fast and heart-racing and then you’re like “Am I in the right place? I’m supposed to be behind the lamp? Am I behind the lamp? HE’S RIGHT THERE! HE’S RIGHT THERE!" she says with a big laugh.

She served as a member of the stenography team for Obama throughout his second term.  Just 26 years old, Beck Dorey-Stein had an assigned seat on Air Force One. Her book details the wild workdays, and weaves in a great deal about her personal life. "I wrote that intentionally as far as I wrote it for young people, especially young women who are in a great job, or a not so great job, but figuring themselves out, no matter where you are in your 20’s, you’re figuring a lot out. And so I wanted to be honest about that I think most of the time ... it’s all about “I was perfect, and I was the last one in the room and I did everything as eloquently as possible” and my whole thing is like.. .I was a MESS! Because I was 26!! And I was barely keeping it together but I was trying really hard. I’m proud of the book I created because it is so honest. It’s the whole story. The really glamourous moments and the really embarrassing moments. They’re all part of life."

It was her Dad who urged her to ‘just take notes’ about the experience. Which she did, thinking it would be a book of essays about different Obama staffers she had come to know. But it was advice from David Remnick, the editor of The New Yorker magazine that nudged her in a different direction. "These are all about other people, and that’s cool .. but you got your job on Craigslist. I think this has to be your story. He was like – anyone can talk about being the Roosevelt room full of  journalists, you’re the only one who can say – you were working all these jobs and then all of a sudden you were recording the President, in his office, on Air Force One, with one other person. Or you’re running on a treadmill next to him."

Beck’s role as a stenographer meant she was often front and center when Obama was meeting world leaders or responding to significant events that occurred during his time in office. This is part two of our conversation with Beck Dorey-Stein: 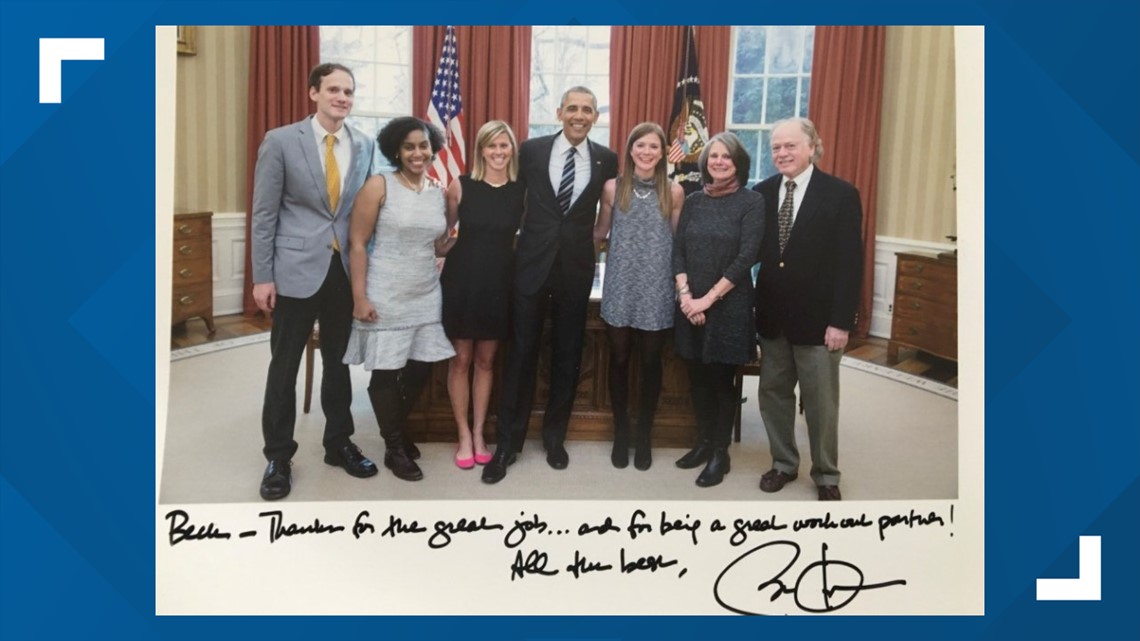 In her book, From the Corner of the Oval, Beck Dorey-Stein writes about traveling with President Obama throughout his second term – occasions of negotiation, occasions marking success – and often occasions that were heart-breaking. She recalls the day he was to deliver the eulogy for the young Reverend Clementa Pinckney, one of the nine African Americans gunned down at the Emmanual Church in Charleston, South Carolina, in June of 2015.

"That day was so hard, and seeing those families and seeing those two little girls in the front row. Most of the staffers were just huddled in a room because you can only handle so much...So then when he broke into Amazing Grace, it just, in the moment healed this broken heart for all of us."

She continues, "That’s how the day started. And then it ends with us flying back to Washington, all of us emotionally exhausted, then we see the White House lit up in rainbow colors. This is the craziness of working in the White House where one person does have so much influence where we can then have equal rights celebrated on the same day that we have this heart-breaking event in the morning. Those days are memorable in the worst possible way but I think they make us more human and hopefully more compassionate."

She writes about the magic of working in this world, when the clock is ticking. This is Obama’s second term.

"President Obama always said “It’s about the work.” Even though I was a stenographer ... you have a job to do. When you’re there, everyone does. That was my big takeaway, moving forward even if I never have a job with as many glamourous perks as working in the White House and flying on Air Force One, it’s really about what am I doing, how am I spending my time, where am I putting my energy. I really saw that from him. We would fly overnight because he didn’t want to waste daylight hours abroad. So we would have like seven hours to sleep on a plane, and then land in Astonia, and have an 18 hour day... That was the precedent he was setting as far as we’re here to get a job done and we don’t want to waste any time. And so the big takeway was you just pour your heart and soul in to it.'

Beck has many fond memories of her years in the White House. On one of her birthdays, her friends arranged for her to ride with the President … on Marine One. "Marine One’s pretty small.…there’s nowhere to really go. They were like, ‘He won’t even know you’re there. You’re just gonna follow everyone else on. He won’t know you’re there, you’ll just get to see the helicopter.” And I was like, okay. And then I get on, and I was like, “There’s no where to hide on a helicopter! He gets this very nice window seat and I was on a bench seat so I am basically facing him and he immediately knew it was my birthday. So he starts asking questions. And the funny thing is – you know, I think at this point we all have a sense of President Obama’s humor, and his dedication, and his intelligence but – what you don’t necessarily see is just how much of a DAD he is? And so he was immediately like…"What are you doing for your birthday? Is someone taking you out for your birthday?" This is what people don’t’ get to see—that he’s just kind of edging….for more information," she recalls.

The lessons learned from the corner of the Oval are lessons she’ll hang on to for life. "A big one I took away from President Obama is don’t let perfect be the enemy of the good. Seeing how he had to operate and often choose between a bad decision and a worse decision I realized that sometimes – especially with progress on a bigger scale – it’s always a matter of, okay –it’s an inch forward. We’re getting there. And so now that I write full time, I keep that in mind all the time. It’s an inch forward, that sentence isn’t…. terrible."

Beck's parents began coming to Maine before they were married, and as a kid, she grew up coming here and camping every summer. She now lives full-time in South Portland. Her debut novel “Rock The Boat” is due out in June.  "From The Corner Of The Oval" by Beck Dorey-Stein is available on Amazon as well as in local bookstores. To pre-order 'Rock The Boat", click here.