In 2016, Mark Baumer attempted to walk across America barefoot to raise attention for climate change. His journey and life were cut short when he was hit and killed. 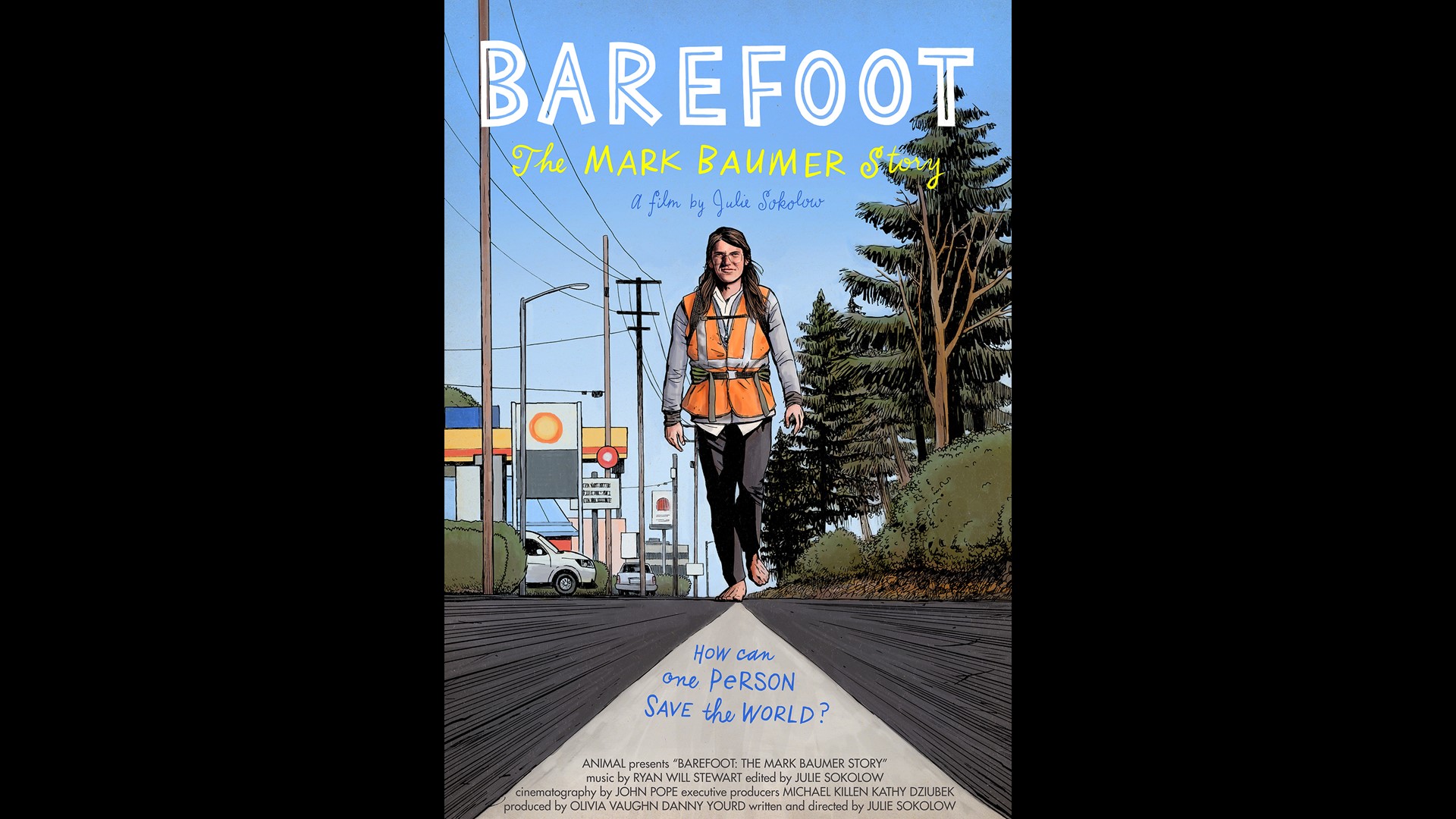 DURHAM, Maine — Mark Baumer grew up in Durham, the only child of Mary and Jim Baumer. His parents describe his childhood as an idyllic one; making forts in the Maine woods and playing sports. It was those Maine woods that would serve as the impetus for his love of the environment.

"If you could have scripted a childhood for your child you couldn't have scripted a better childhood," Jim Baumer explains. Mark liked to dress up and had a comical and whimsical personality. He tried out for school plays and found his performative side.

But when Mark went to Wheaton College, where he played baseball and then later Brown University, his love and concern for the environment started to become a passion along with performative art.

"Everyone describes him as being exceptionally quiet and a really good listener in his private life," explains film director Julie Sokolow. However, to watch any of his hundreds of YouTube videos - that span a decade - one could never surmise that this tall, boisterous figure was reserved.

"Mark was whimsical. He had this very sort of quirky humor side," says Jim Baumer. While attending Brown University Mark gained campus fame for teaching a writing class on the "art of subtle weirdness."

Mark began working for the Brown University Library and during this time wrote several books and poetry even winning some accolades for his work. Around the same time, Mark joined FANG an activist collective based in Rhode Island.

In 2016, Mark decided to walk across the country barefoot to raise awareness for climate change and raise money for FANG. It was not his first cross-country walk. In 2010 he walked from Georgia to California in 81 days. That trip was different. He had shoes and pushed all his belongings in a child's stroller.

"He wanted to save the planet. He wanted to make people aware of climate change, that we’re destroying the earth," says Mary Baumer. Even though both Mary and Jim Baumer were nervous about his trip, they did not share their concerns with their son, they wanted Mark to feel supported.

On October 13, 2016, Mark Baumer left his home, his job, friends, and his girlfriend in Providence, Rhode Island with a singular goal to walk to California barefoot.

But Mark did a lot more than just walk.

Mark wrote a blog and made videos of himself walking where he shared his struggles and challenges, his excitement and interactions with passerby's, his frustrations, and triumphs. Mark was active on Instagram, Twitter, Snapchat, and Youtube. The New Yorker later called him "a compulsive social-media diarist" which allowed fans to feel like they were on the journey with him.

As a plant-based vegan, his fans were very curious to know how he maintained his diet while stopping at convenience stores along his trek. But he made it work, loading up on food when he could, eating kale, spinach, or garbanzo beans straight from the can while he walked barefoot.

Mark also used time on the road to stay connected with friends and family. According to Mark's mother, he called his grandmother every day to remind her to take her medication and to chat with her. Mark stayed at inexpensive hotels or found quiet spots on the side of the road to sleep.

When he hit Ohio, the snowy weather caught up with him. His feet had been doing well. He had trained for the walk but he had not considered the chemicals put on roads to keep them from icing. They started to agitate and wear on his feet. Mark felt defeated but then decided to simply start over again. He took a bus to Florida and started his walk anew.

On January 21, 2017, just after noon on a clear day in Walton County Florida a car hit Mark. He was very far off the side of the road, he was walking against traffic in a two-mile straight-away and he was wearing his bright fluorescent vest. His body was thrown and he died at the scene. It was the 101st day of his journey. He had walked more than 700 miles.

"She was that person that I always feared Mark would come across on his walk," says Jim Baumer. The driver said in a police report that she saw Mark before she hit him. She was not drug tested at the scene.

The driver was charged with a civil infraction, ordered to pay a $600 fine, and her license was suspended for six months. As of November 10, 2020, she had not reached out to Mark's parents.

Filmmaker Julie Sokolow had been following Mark's progress. She didn't want to bother him on his walk but she wanted to possibly collaborate with him when he completed his trip. When she heard the news of his death, recognizing the great body of work he had created along his way, Sokolow knew it needed to be remembered and preserved.

"If Mark had successfully walked from Providence, Rhode Island to California barefoot he would have broken the Guinness World Record for barefoot walking. He would have gotten a lot of media attention and attention on his mission to raise awareness about climate change," Sokolow explains.

Many filmmakers approached the Baumers after Mark's death but they knew after their first discussion with Sokolow that she was the one.

Sokolow directed and edited the award-winning documentary Barefoot: The Mark Baumer Story. In late October 2020, the film was released on Amazon and Itunes.

For Mary and Jim Baumer, the movie is a beautiful reminder of their son.

"I didn't want for people to forget about Mark - that Mark Baumer lived," says Mary Baumer.

The Baumers have since set up a non-profit in their son's name, Mark Baumer Sustainability Fund, which works with causes and organizations Mark was passionate about such as working towards building a better and more equitable world for everyone. The couple has also adopted a plant-based vegan diet.

After his death, the New Yorker would compare Mark Baumer to comedian Andy Kaufman, his style of performative art and writing is a flavor that not all will enjoy but his message in life was simple: be kind to others, yourself, and the earth.

As Mark Baumer said in one of his more than a hundred videos, "There is something beautiful about the road. It's a symbol of going somewhere. I just prefer to do it on my own two feet."

When it came to the earth, to life, Mark Baumer walked the walk.