At 93, Maine artist is still teaching and creating at retirement community in Rockland

Artist Constance Keirmaier teaches residents at Bartlett Woods in Rockland, some who have never picked up a paintbrush. 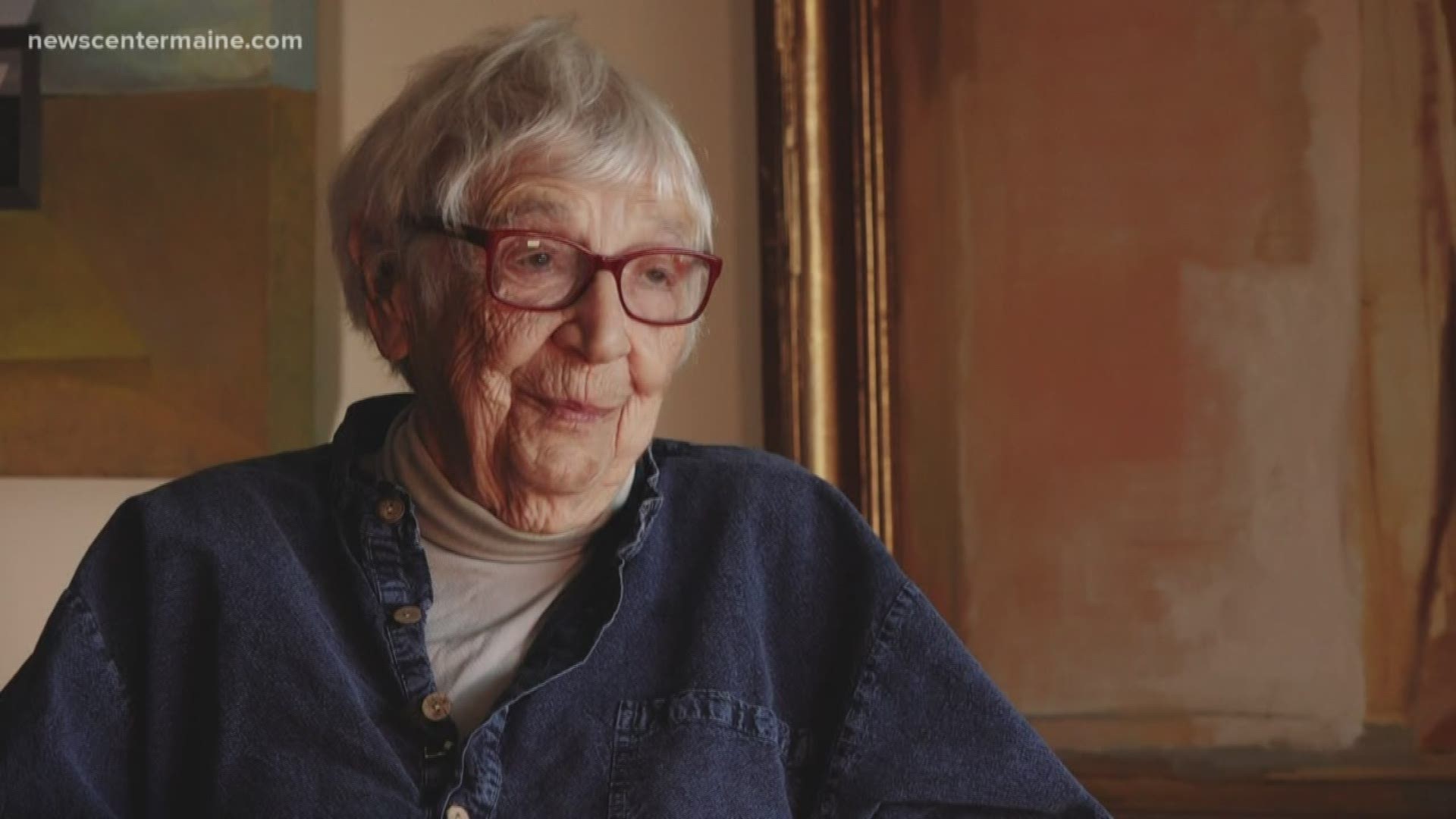 ROCKLAND, Maine — Constance Keirmaier has had a long and successful career as an artist. She's an award-winning painter who also creates collages, miniature box art, and prints, and worked for years creating commercial art. Her work has been shown throughout the east coast and New York City, from her native Connecticut to Maine where she has summered for decades and now lives at Bartlett Woods, a retirement community in Rockland.

But in moving to the retirement community, she didn't want to stop creating art or teaching it.

"Working is the big thing keeping me young," Constance shared as she led a tour of her meticulously decorated apartment with every wall covered in her art and that of friends. With the help of staff at Bartlett Woods, a studio space was created, and for the last three years, Constance has been teaching other residents in their 80s and 90s, a lot of whom have never picked up a paintbrush.

"I really didn't feel I could draw or paint," said 93-year-old Marian White. Her first class was the first one Constance taught at the retirement community. "I decided, in my 90s, it was time I learned ... All of the sudden, she expects me to do something, so I better do it. And that’s exciting because it happens."

"It" happened for Levina Gerritesen's husband, Franz, who had the beginning of Alzheimer's disease. When Levina and Franz showed up to class, Levina wanted her husband to sit next to her.

"She was very protective of him," Constance recalled. "She said you have to sit with me, and I said, no, he is going to sit at the other end of the table." Levina admits she was "just being plain bossy."

With the help of Constance, the 94-year-old recalled and painted a scene from his childhood growing up in Holland. His father had a homing pigeon, and Sunday dinners often got cold as the children would have to go find the pigeon and coax it out of a tree. Franz painted the vivid scene in bright green and magenta that his wife of 70 years holds tenderly in her hands.

"She was so good with him and patient and loving," Levina explained of her teacher's instruction to her husband who recently passed away.

"It's just amazing what people remember and what they pull out of themselves to paint," Constance said. "He was a handsome, beautiful man. I loved having him," Constance said as she thinks of Franz.

Credit: contributed
Artwork of Franz Gerritsen at 94, painted before his death at Bartlett Woods under the instructions of Constance Kiermaier.

And while she loves teaching, it is creating that really excites Constance. She is currently working on pieces for an upcoming exhibit at her gallery in Connecticut in May.

Constance remembers the moment she became an artist with clarity. She was 6 years old, attending a small school in Virginia. Her teacher handed out a black and a white piece of paper to every student and then animal stencils. She got a pig stencil.

"As I was drawing the stencil it came to me that, when I cut it out, it was going to be a black pig, and I can remember it so vividly, and it will be a black pig with white spots.

"She looked at me and said, 'That is wonderful. You are going to be an artist.' I have never forgotten it, and I have never been anything but an artist ever since."

Those words have guided her life, and although Constance admits she has been many things in her life, she's always been an artist. She went on to art school and then private school and then Yale where she met her husband, Jack. He was in law school as she studied art. The pair married and had four children.

Jack was supportive of Constance's career. And like so many mothers, she got creative in trying to juggle children and work. She hired a babysitter to watch her kids for a couple of hours a day so she could work. But with her studio in her house, she would walk out the door, wave goodbye to the children and then sneak back into the house and up to her studio to work.

"If they knew I was there I couldn’t get anything done," Constance chuckled.

As her children grew older, Constance opened a studio outside of her home and started to do commercial work, creating backgrounds for television.

1 / 8
contributed
Constance Keirmaier has taught art for more than 40 years.

"I loved having children. I thought it was really important for me. It made my life but art enriched my life. And I can’t imagine not doing both."

Constance said her children always knew how important art was to her. "Motherhood prepared me for art in a funny way."

Her husband, Jack, died in 2009. His ties inspired art that now adorns the walls of her home. An ironing board with a single tie and old fashioned iron and a spiral of several ties nestled in a wooden box titled "A Life Well Lived." She points them out as she continues her tour.

Seeing art in simple and mundane things is a specialty of hers, something she tries to imbue in her new students. And it's working.

"I think I see things that I didn’t used to. I look at a scene and I think I see more now. I mean I’m looking for more," Marian White said.

For Constance, it's exciting to see her peers in the twilight years of life finding new passions, especially one she holds so dear.

"I love art. I love it! Love people. And I am very happy here because I can do this," Constance said with a smile on her face.