Jay Sawyer is known as JBone. The Maine artist and former merchant marine is raising funds for an El Faro statue to honor the 4 Mainers and 33 crew members who died. 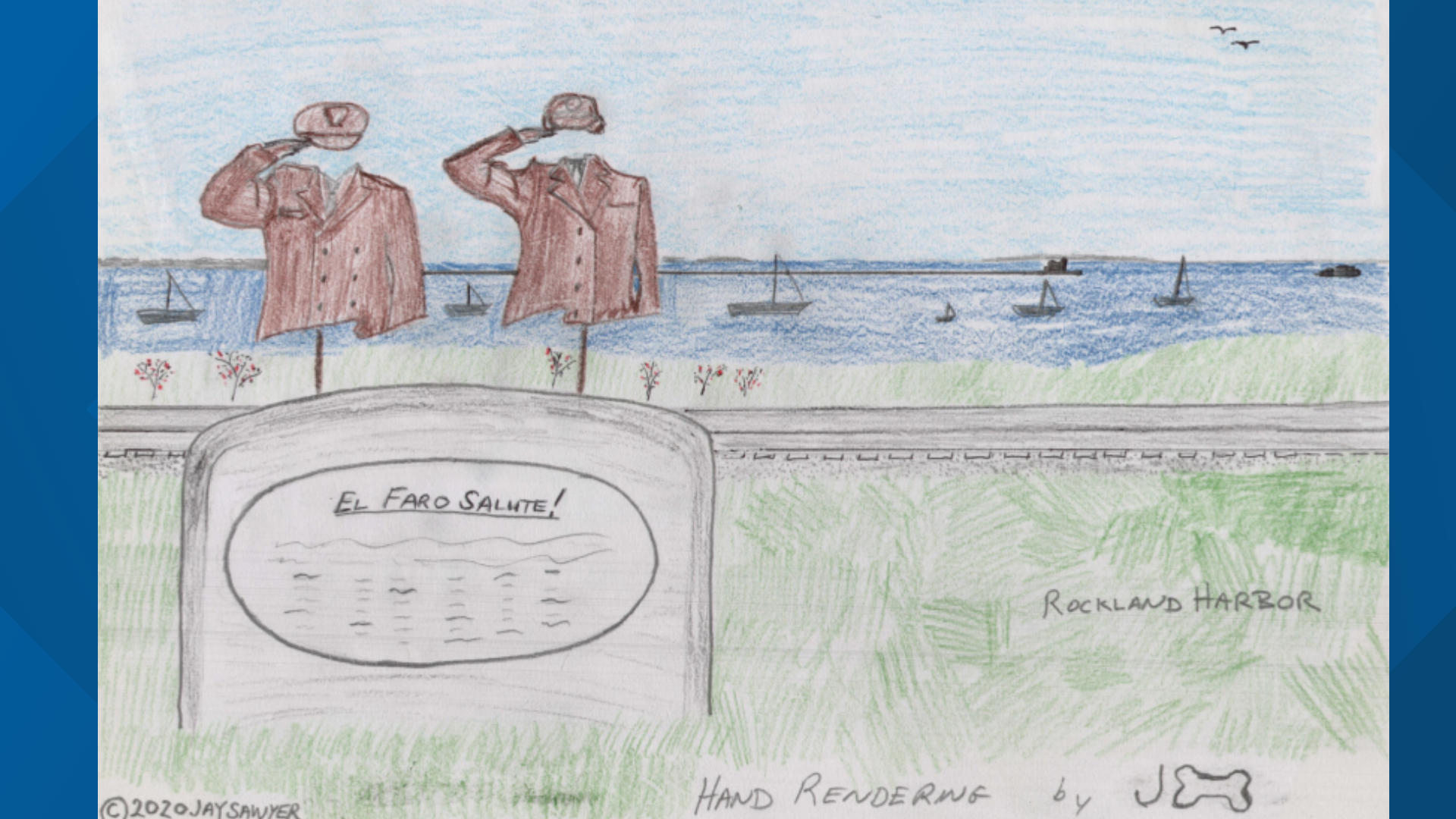 ROCKLAND, Maine — The four Mainers and 33 crew members who died when the cargo shipping vessel El Faro sank off the coast of the Bahamas in 2015, has been on Jay Sawyer's mind for the last five years.

A merchant marine himself and graduate of the Maine Maritime Academy, like the four Mainers who died, Saywer has wanted to pay tribute to them and allow others a way to remember them from Maine's shore.

It was the worst American shipping disaster in 35 years when El Faro container ship sank after streaming into Hurricane Joaquin on October 1, 2015, while en route from its homeport in Florida bound for Puerto Rico.

Sawyer is creating what he is calling "El Faro Salute". Two uniforms, one male, one female, made of 1/8 inch steel, topped with hats, and giving a full salute will cast their shadow over the harbor in downtown Rockland. The steel sculptures will be anchored to a piece of granite with all 33 names inscribed.

"With the large contingent of Maine Maritime family here and people tied to the Maritime community, there's a sense of a need for this," explains Sawyer.

An El Faro Memorial already exists in Jacksonville Florida which was the ship's homeport. Sawyer's budget for the project in Maine is $135,000. The Penobscot Marine Museum in Searsport is serving as the fiscal sponsor and helping fundraise.

"Also to help with the families as they're still healing from this and probably forever will be," says Sawyer. All of the families of the Mainers who died have visited with Sawyer and spent time at his studio in Warren. He says they all support the project.

The engineer and welder started sculpting, mostly using steel, when he was 40 years old. In Warren, Studio JBone boasts a garden filled with steel sculptures, a ladder headed to the heavens, a hard sunrise scape, a mushroom canopy and spheres, lots, and lots of spheres.

Credit: Jay Sawyer
Jay Saywer's sculpture “A Spirit of Its Own,” is on view at the Portland International Jetport.

"To me the sphere was the ultimate form," Sawyer says as he passes his worn hands over the steel rings that make up a larger sculpture. "It speaks to oneness," he says as he looks over a field of spheres made of rings, horseshoes and railroad nails. Two

Sawyer always had a propensity for art, noticing the beauty in mechanical things.

"Even things on the ship, the pipes that the steam blows through,  the valves and everything is so hydrodynamic and the aerodynamic that to work really efficiently it ends up that it's a beautiful piece," says Sawyer. He knew that if he could master the sphere he would be on his way to being an artist. After years of selling his art, its now that he is realizing possibly his most important work, to honor those lost but hopefully never forgotten.

"Its 33 souls and it didn't matter what your position was on the ship. You were a living human being with a family and a life and it's all the same to each one of the families."

So far, Sawyer has raised $40,000 for the El Faro Salute. The Maine artist hopes to have the tribute installed by 2021. If you would like to donate click here for more information.