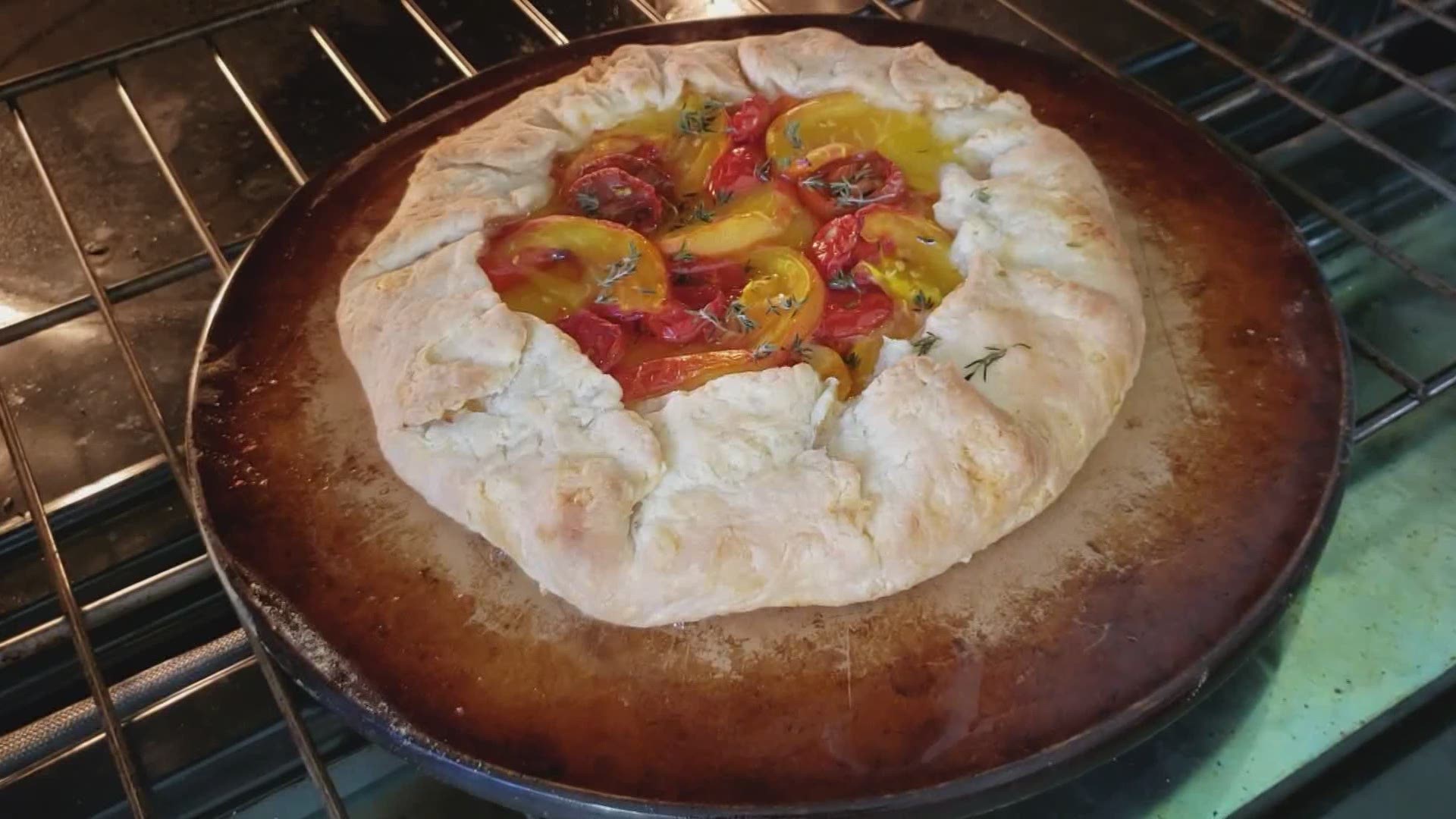 FALMOUTH, Maine — Theresa Taplin is most at home in her kitchen, and when she decided to share this recipe, recruited her son to serve as her 'production crew'. They did a terrific job. With tomatoes being in abundance these days, here is a recipe you just might want to try.

Filling:
1 ½ cups of assorted heirloom tomatoes
Salt
1 large onion, halved and thinly sliced in half moons
1 teaspoon salt
pinch of sugar
¼ teaspoon of cayenne, or to taste
½ cup of asiago, fontina, gruyere or other favorite cheese

Directions:
1. Make pastry: In a bowl, combine the flour and salt. Place the butter in another bowl. Place both bowls in the freezer for 1 hour. Remove the bowls from the freezer and make a well in the center of the flour. Add the butter to the well and, using a pastry blender, cut it in until the mixture resembles coarse meal. Make another well in the center. In a small bowl, whisk together the sour cream, lemon juice and water and add half of this mixture to the well. With your fingertips, mix in the liquid until large lumps form. Remove the large lumps and repeat with the remaining liquid and flour-butter mixture. Pat the lumps into a ball; do not overwork the dough. Cover with plastic wrap
and refrigerate for 1 hour.
2. Caramelize onions: While pastry is chilling in refrigerator, melt butter in a heavy skillet and cook onion over low heat with the remaining half-teaspoon of salt and pinch of sugar, stirring occasionally, until soft and lightly golden brown, about 20 minutes. Stir in cayenne.
3. Prepare the tomatoes by slicing into ¼” slices and laying on a baking sheet lined with
paper towels. Salt all of the tomatoes and let set for 15 minutes. Place fresh paper towels on top of tomatoes and press to capture all excess moisture and salt.
4. Preheat oven to 400 degrees.
5. Assemble galette: On a floured work surface, roll the dough out into a 12-inch round.
Transfer to an ungreased baking sheet. Layer with caramelized onion, cheese and then arrange tomatoes in a colorful pattern around the top, leaving a 1 ½” border. Fold the border over the onion, cheese and tomato mixture, pleating the edge to make it fit. The center will be open.
6. Bake until golden brown, 30-40 minutes. Remove from oven, let stand for 5 minutes then slide the galette onto a serving plate. Cut into wedges and serve hot, warm or at room temperature. Serves 6.
Enjoy!