What online classrooms look like when they're designed to be virtual

Maine Virtual Academy has been running online classes for five years; we speak with a MEVA teacher and a student about how it's working. 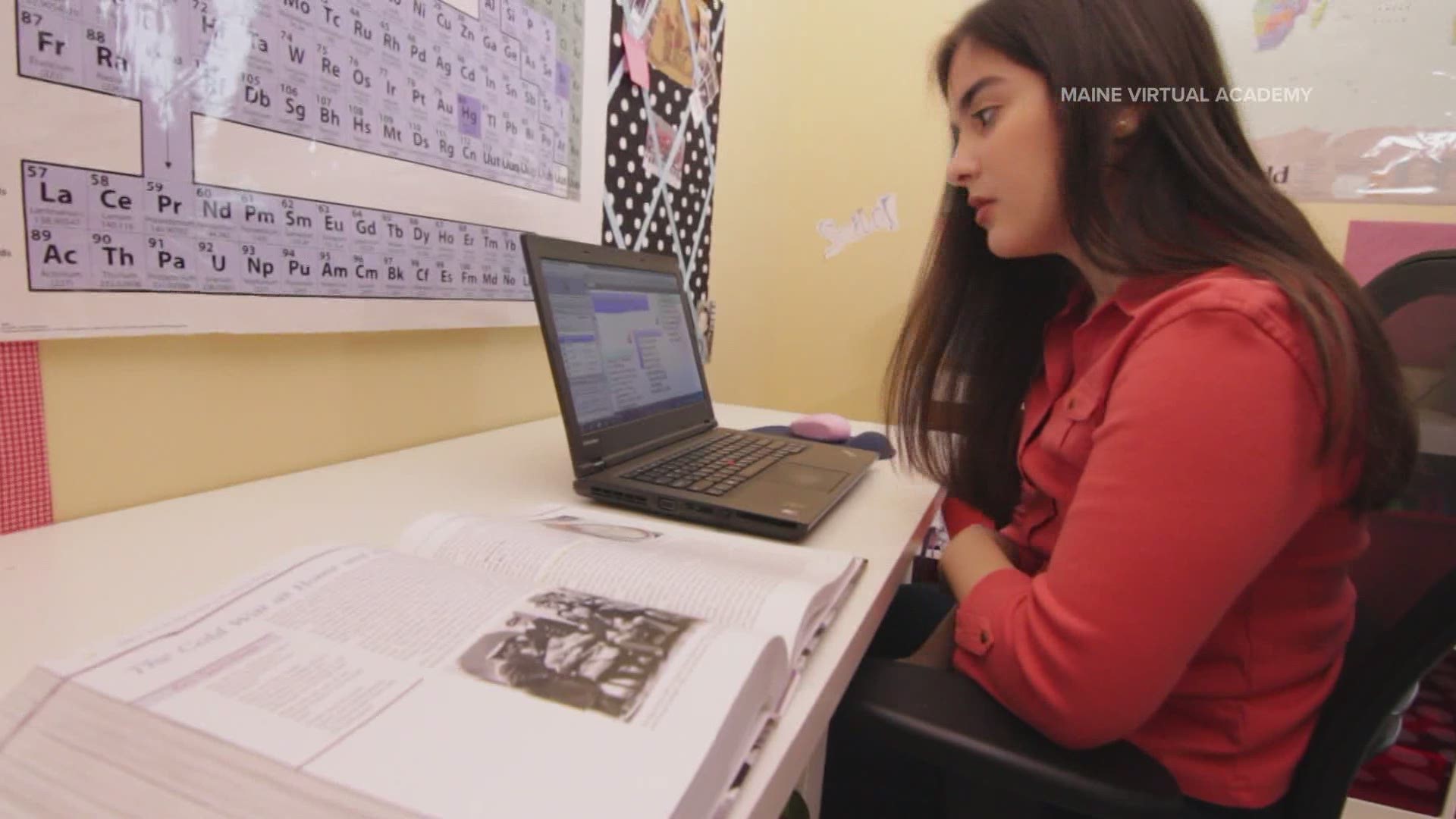 AUGUSTA, Maine — There’s a lot of apprehension heading into this school year; parents and teachers alike concerned about online classes. There's a school in Maine, though, that has been running courses online for five years now; and while it continues to learn and grow each year, school officials believe they have virtual learning down to a science. Could districts take a page from Maine Virtual Academy?

We spoke with a student, parent, and teacher from MEVA. "It's like teaching twice because once you’ve created everything you’re not just handing it out to the students like I would when I was a brick-and-mortar teacher," Carla Hamilton admits there's a learning curve to being a virtual teacher. "You also have to then put it all online and send it back out to them, so in some ways it can be double the effort and it could be really intimidating at first."

Hamilton has been teaching classes online for five years now with Maine Virtual Academy, a school built around easier classroom access for families throughout the state. Hamilton says her days are pretty typical to what they used to be inside the walls of a school.

"A lot of people picture a virtual academy as an a-synchronous model where you’re sort of just clicking on a lot of things in a Google classroom, like worksheets and stuff, but I am all about project-based learning and our school is really traditional in terms of a bell schedule," says Hamilton. An assembly kicks off the day at 8:15 AM.

"Class is usually about 50 minutes with some breaks in between and then thirty minutes for lunch, sometimes more. It varies day to day but that’s generally what happens," explains student, Samantha Siemerling. "Then they have after school clubs."

Online learning isn’t for everyone, but it was a good bet for Samantha, now heading into her senior year with MEVA. Her mother, Margaret, had initially started homeschooling her. The military family moved a lot, and Samantha had been the target of bullying. Just before Samantha’s freshman year, Margaret learned about the virtual academy. "I like the idea of actual teachers teaching to my child, as opposed to her learning on her own with me," says Margaret. "I was nervous about high school."

High school for Samantha may not look like hallways filled with lockers and passing notes, but she still has classmates; after school activities; and AP courses.

"I was the student who was driven in early or had to stay late to have that one-on-one time with the teacher, and that was so important for my education," says Hamilton. "With our schedule, we have a lot more time to meet with our students." Hamilton says she and her colleagues feel even more connected to their students, despite interactions that are rarely in-person.

"There’s something really special that happens online because you don’t have that social pressure of raising your hand and everyone staring at you when you’re like, 'I’m sorry I don’t get it, can you tell me?' They can send me a private message just like we can in a Zoom session, and ask for help. They can send an email to say, 'Can we work one-on-one?' We also use breakout rooms, so they get a lot of individual and small time," Hamilton says.

No choppy Zoom meetings either; the school uses a program called Blackboard, where teachers directly talk with their students. If kids miss classes or assignments, they can go back anytime to get them done, something a lot of traveling athletes have taken advantage of. There, parents can also keep track of attendance and success. Samantha Siemerling has been taking college courses online, something the high school senior says has already set her up for success.

"I never would’ve known that she could have college classes while still in high school," says Margaret Siemerling. "It was a MEVA teacher who reached out and said I see where Samantha is, she’s academically strong."

There are a lot of teachers, school administrators, students, and parents who are nervous about going into the school year because it may be a lot of online learning. Does Hamilton think they can take some lessons from Maine Virtual Academy? "Absolutely," she responds. "There’s so much room for exploration and activity; for students to pursue their passions. I know that it’s a challenge right now for everyone to see, 'How can we take this model and make it engaging and hands-on and still feel that closeness and connection?' but I just want to encourage everyone that there is so much opportunity here and it really is the way of the future, I think."

Maine has two online schools, including Maine Connections Academy. A third party report, highlighted in a Portland Press Herald article one year ago, showed that both academies struggle with absenteeism, a low graduation rate, and weak test scores. Peter Mills, a member of Maine Virtual Academy's board of directors, was quoted in the article as saying that the school initially attracted a wide range of students; some with physical or emotional disabilities, others who were disengaged from school and didn't want to attend classes in their public schools; for whom virtual school was a final resort.